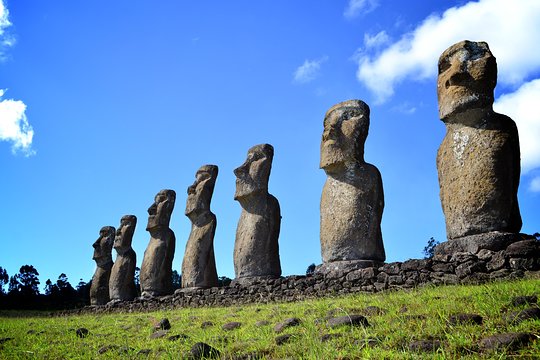 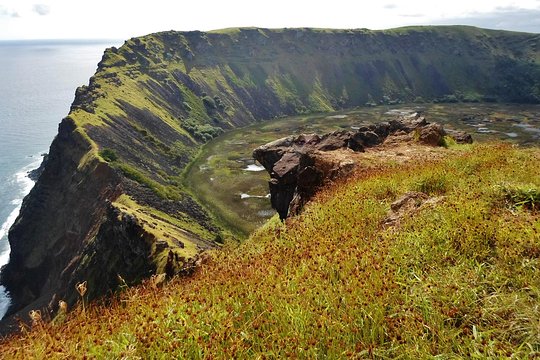 Pass By: Airport Mataveri, Isla de Pascua, Valparaíso, Chile
Reception at the Airport with flower necklaces and transfer to your selected hotel. Afternoon is at leisure. Overnight at a 4* Hotel in Easter Island

No meals included on this day.
Accommodation included: Overnight at a 4* Hotel in Easter Island

Stop At: Ahu Vaihu, Coastal Road, Hanga Roa, Easter Island Chile
Departing from Hanga Roa's town at about 09:30 AM, going to the southeastern and northeastern coast of the Island visiting the Ahu Vaihu temple, which is located 10 km from Hanga Roa. It consists of a stone platform with 8 Moai statues and 8 Pukao dispersed in the proximities. Then, we will go to Ahu Akahanga, so-called the "Platform of the King".
Duration: 2 hours

Stop At: Ahu Nau Nau, Playa Anakena, Easter Island Chile
After that, we will arrive at Ahu Nau Nau, a temple of a complex construction due to its different levels where we will find 5 Moai statues with Pukao. There, we will see petroglyphs in the backs of the statues. We will continue our excursion to the Rano Raraku volcano and quarry, where there was carved most of the Moai of the island, using the volcanic rock of its hillsides.
Duration: 2 hours

Stop At: Ahu Tahai, Rapa Nui, Easter Island Chile
We start our tour at 09:30 AM from Hanga Roa heading to the Tahai Archaeological Complex. This ceremonial center features 3 Ahus: Ahu Vai Uri with 5 Moai statues, Ahu Tahai with 1 Moai statue and Ahu Le to Riko with 1 Moai statue. From this site, we will be able to appreciate inspiring landscapes.
Duration: 1 hour

Stop At: Rano Kau, Easter Island Chile
We will continue our tour by visiting the Rano Kau volcano where we will be able to see the largest crater on the Island and one of the largest sweet water reservation of the area. Finally, we will visit the Orongo Ceremonial Village, old and magnificent ceremonial city located in the western side of the Rano Kau volcano.
Duration: 1 hour

Stop At: Ahu Vinapu, Easter Island Chile
We initiate the tour about 03:00 PM from Hanga Roa, visiting Ahu Vinapu, that it was used by the islanders in the year 1.200 A.C. including 3 Ahu. The first one has 6 Moai statues demolished and painted in red. The second one has a supposedly feminine Moai which had two heads. Finally, the third Moai, the oldest one, features only removed stones. We will continue our way to the quarry of Puna Pau, archaeological site in the eastern side of Hanga Roa. It is a small crater of red slag, from where the Pukao or hats of the Moai statues were obtained. Along its old exit, there are some incomplete and abandoned Moai. We will head to Ahu Akivi, the first Ahu restored by the science in the island in the year 1960.
Duration: 1 hour

Departure Time
7:00 AM
Duration
4 days
Return Details
Drop off after every day activity will be at your hotel.
On the last day of the trip you will be transferred to airport to take your flight back home.
Inclusions
Exclusions
Show More
Additional Info
Cancellation Policy
All sales are final and incur 100% cancellation penalties.
Reviews
Traveller rating
Questions & Answers
Ask a question
George D
is any meals are included
AnswerHide all answers
Are you sure you want to delete this question?
DeleteConfirm Cancel
Hi there, the meals included are the ones mentioned in the "inclusions" list (Breakfast x3 and a box lunch on day 2). Thank you!
Are you sure you want to delete this answer?
DeleteConfirmCancel
Google Translation
Key Details
Why Book on TripAdvisor?
Travellers Also Viewed
Private Tour: 2 Half Days & 1 Full Day
from US$500.00*
Likely To Sell Out
The Magic of Easter Island Program 4...
2 Reviews
from US$1,200.00*
Easter Island Adventure
from US$1,250.00*
4-Day Tour of Easter Island: Moai...
15 Reviews
from US$773.33*
More options from Signature Tours
See all
Premium Full Day Tour to Chiloe...
1 Review
from US$166.40*
Small-Group Half Day Tour to Concha y...
1 Review
from US$80.00*
Cooking Class in Santiago de Chile
1 Review
from US$137.00*
4-Days Trip to Discover Puerto...
1 Review
from US$860.00*
Bus Tours(20)
See all
2-Day Small-Group Tour Easter Island...
48 Reviews
from US$256.00*
Small-Group Full-Day Easter Island...
50 Reviews
from US$128.00*
Likely To Sell Out
Easter Island Full-Day Tour: Ahu...
31 Reviews
from US$91.00*
Small-Group Full-Day Easter Island...
59 Reviews
from US$128.00*
Shop Tickets And Tours(44)
Shop Now
Outdoor Activities
Private & Custom Tours
Day Trips & Excursions
Tours & Sightseeing
Cultural & Theme Tours
Multi-day & Extended Tours