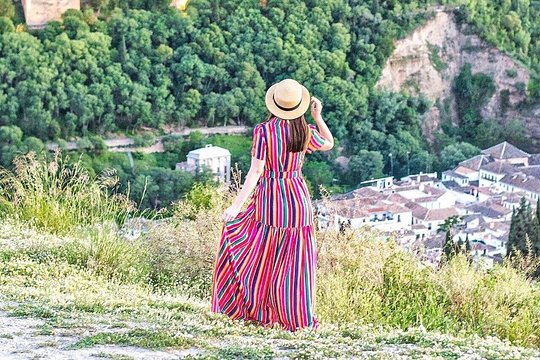 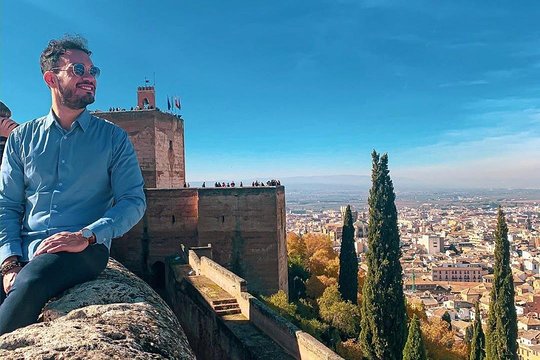 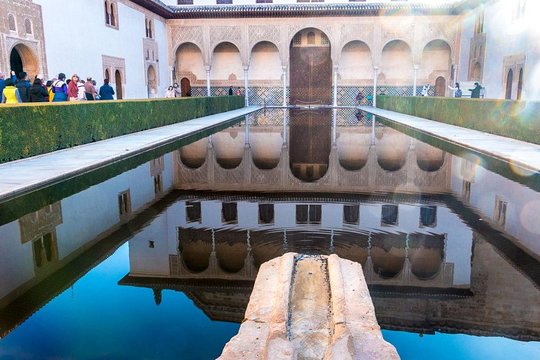 Special Offer
Intro offer: Book by January 15 and travel between January 5 and January 31 to save 8%.
This product is unavailable to book via TripAdvisor. Contact the supplier for availability.
From
US$123.36
Free Cancellation up to 24 hours in advance
Low Price Guarantee
No Booking Fees
Overview
Explore the Nasrid Palaces, Alhambra fortress and lavish Generalife Gardens with a Experienced Gudie including skip-the-line and guaranteed access Ticket. See thousands of years of Granada's moorish history as you explore this monumental site overlooking the beautiful city of Granada.

- 3 to 3:30 hours of guided tour of entire Alhambra Complex.
- Entry to Nasrid Palaces : Mexuar, Comares, Lions and Generalife.
- Get wonderful panoramic views of Granada from the hilltop in the gorgeous Generalife Gardens.
- Skip the lines and be amazed by the Alcazaba Fortress and the Palace of Charles V as your audio guided tour explains all on this walking tour.
- Learn the intricacies of the life of sultans and Moorish kings who long ago made Alhambra their home, and choose to explore the opulent rooms of the Nasrid palaces.
- Walk through the courtyards: of the Arrayanes, the Reja, the Acequia, the Sultana.
- Audio guided tour (if option selected)
- Experienced Live Guided tour.
What to Expect
Itinerary
This is a typical itinerary for this product

Enjoy the flexibility and freedom of a " Live Guided tour " or a " Audio guide tour "(if selected) of Granada. After you have picked up your personal tourist navigator and your entry time for Alhambra Palace, enjoy skip-the-queue entry to Alhambra and see the exquisitely detailed Islamic art and architecture of Generalife Gardens, Nasrid Palaces, and Alcazaba Fortress.

Guided tour of the Alhambra where you discover the best preserved Muslim Medieval City in the world.Your experienced tour guide will provide detailed explanations of Alhambra and Generalife as you walk.

Nasrid Palaces : Mexuar, Comares, Lions and Generalife.
Mohammed ben Al-Hamar (Mohammed I) was the first king to move to the Alcazaba and no records about a new palace being built are kept until those of Abu l-Walid Ismail (fifth king of the dynasty).
A palace was built near the Great Mosque (Gran Mezquita) but only the Mexuar is now left because Yusuf I destroyed it completely. He started some improvements in the Comares Tower (Torre de Comares), the Court of the Myrtles (Patio de los Arrayanes) and the Baths (Baños). These improvements were finished by Mohammed V, who added them all to the Mexuar, extended the gallery that would later be called Machuca and constructed the Palace of the Lions (Palacio de los Leones). These two kings were the most important ones as regards the construction, reconstruction, and decoration of the Alhambra.

Alcazaba & Generelife : The Generalife and the Alhambra were connected through gardens that successfully integrated the buildings with nature. The zone was simultaneously divided into the three parts that constitute the New Garden (Jardines Nuevos) today.
In 1931 a section resembling a labyrinth garden, with arched rose gardens and cypress trees, was finished near the building; in 1951 the section was extended in accordance with the architect Prieto Moreno’s design for a Muslim-style garden, with an irrigation channel crossing, streets, cypress lined walls, a pergola and a view of both the Alhambra and the city. After your visit to Alhambra and before giving back the audio guide, discover the city’s best cultural offerings, tapas bars, monuments, and museums. Go to exhibitions and track restaurants according to price and the type of cuisine.
Follow the tips of your GPS navigator,(with audio guide) and relax in the evening with a massage, have fun with friends at a great restaurant, play golf, or visit an amusement park.

CrazyRichAsian2020
Philippines
31
Great experience!
Sagrada Familia is awesome! Photos cant give justice to it, it must be seen and experienced. Going thru the…
Read more

901Jukie
Lakeland, Tennessee
21
Stunning scenery
We departed Barcelona early in the morning and stopped for breakfast in the pre-Pyrenees. Since we were a private…
Read more

MyWorldtrip2019
110
Great
Using the hop on hop off bus is the only way to see Valencia. It was very good to see the city, and listen to the…
Read more

teacupuppy
20
What an experience!
We throughly enjoyed the tour with the guide. The guide was very knowledgeable and explaining all the facts along…
Read more