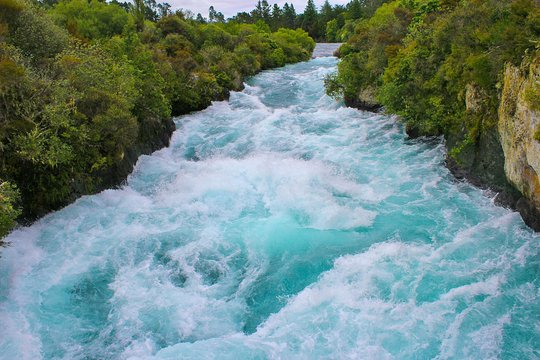 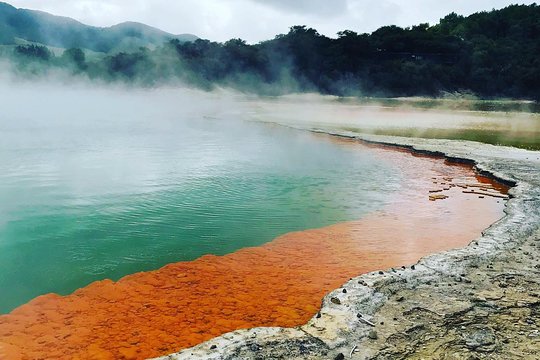 Stop At: Waitomo Glowworm Caves, 39 Waitomo Village Road, Waitomo Caves 3943 New Zealand
Hobbiton, Waitomo Caves, Rotorua, Huka Falls & Taupo! Join us on this fully guided small group tour to all the top tourist attractions in the North Island. A tour not to be missed for fantastic couple of days away.

Beginning with a pickup from your Auckland accommodation, we travel through the Waikato region, the world's most extensive dairy farming region and the site of numerous historical battles on the way to Waitomo Caves. We make a short stop at a fantastic bakery where you have the option to purchase something yummy for breakfast.

Once in Waitomo you will be guided by a direct descendant of the person that discovered the Waitomo caves over a century ago. Experience beautiful cave formations, stalagmites, stalactites, thousands of glowworms, and finally exit the underworld via a gentle glowworm grotto boat ride.
Duration: 2 hours

Stop At: Hobbiton Movie Set, 501 Buckland Road Matamata, Hinuera 3472 New Zealand
After our Waitomo Caves exploration we make our way to Middle Earth and the Hobbiton Movie Set in Matamata. We stop for lunch along the way or at the Alexander Family Sheep Farm and Shires Rest - Hobbiton Movie Sets cafe with amazing food. Next we board one of the official big green Hobbiton buses to depart on a 2 hour fully guided tour of this amazing 12-acre movie set with a professional Hobbiton guide and finish your experience with a complimentary beverage at the famous The Green Dragon Inn.
Duration: 2 hours

Pass By: Lake Rotorua, Rotorua New Zealand
We then continue our journey to the famous geothermal wonderland of Rotorua to check into your hotel for the night. Here you can choose to either relax with free time, or join the optional Maori Cultural dinner experience and show at Tamaki Maori Village (additional cost). This is a multi award-winning experience which we highly recommend!

Stop At: Wai-O-Tapu Thermal Wonderland, 201 Waiotapu Loop Road Rd 3, Rotorua 3073 New Zealand
Day 2 begins with a 9 am pickup from your hotel, allowing you time for breakfast.

Traveling just 20 minutes south, we arrive at Wai-O-Tapu, the geothermal wonderland, ranked by Trip Advisor as one of the most surreal places on Earth. Here you will have a fully guided tour of the geothermal features on offer, including the impressive geothermal activity of Lady Knox geyser, Champagne Lake, Devils Bath, Artists Pallet and more.
Duration: 2 hours

Stop At: Lake Taupo, Taupo Marina New Zealand
After some free time for lunch in Taupo we begin to make our way back to Rotorua and then Auckland, with lots of activities and interesting stories along the way. We then drop you back to your Auckland or Rotorua accommodation to finish the tour.
Duration: 2 hours

No meals included on this day.
No accommodation included on this day.
Show More
Important Information
Departure Point
Traveler pickup is offered
Auckland hotel pick up times:
Hotel pick-ups are from the below hotels only, starting up to 20 mins before your tour time. Please be waiting in your accommodation's lobby or outside no later than this time to avoid missing your pick up and tour. No refunds given for no show passengers.

Auckland Airport (Butterfly Creek) pick up must be requested and approved by our team in writing to receive your pick up time. Pick up time will normally be 15-20 minutes after the tour start time.

Write a review
Traveller rating
Traveller type
Time of year
Language
Selected filters
Coastal223467 wrote a review Feb 2019
4 contributions
Superbe!!! Fantastique!!!
My husband and I did 2 Cheeky Kiwi Travel tours in February 2019 and we enjoyed both trips immensely. Hats off to the best tour guide, Kreig Leitchze, who made our trips so memorable with snacks, picnic lunch at the Cathedral Cove, a bottle of New Zealand red wine, cheese, etc.…
Read more
Date of experience: February 2019
Helpful
Share
About the operator

Pietro_BG_90
Milan, Italy
20
Hobbiton and Waitomo caves
Great Tour. Our guide, Michael, picked us up on time and gave us plenty of information on Auckland and…
Read more

pjcarnot
La Jolla, California
62
Great day, great guide
We were in a van with 4 others led by an adorable, knowledgeable guide named Kenny. It was a special day and we…
Read more

aideen50
50
Brilliant trip
I really enjoyed this trip. My tour guide Mike was brilliant and knowledgeable. Waiotapu was one of the most…
Read more

meganhawksley
10
Full day of fun!
Kenna was an excellent guide from Auckland to Hobbiton. She had so much energy for an early wake up call and it…
Read more

I956JTdiana
Central Romania, Romania
30
Excellent experience...
The movie sets are amazing... it is a tiny special world of fantasy where you would definitely want to get lost.…
Read more

mayb772
Sydney, Australia
51
What a Day!
What a great day we've had with Grant and Cheeky Kiwi tour. Glow worms, Hobbiton, steak lunch at a lovely spot and…
Read more

CDVDWAUS
30
Excellent Tour- Wai-o-tapu & Te Puia
Our Tour guide Grant was a lovely man and an excellent tour guide. He was very informative and made the day fun…
Read more

colinc593
10
Small group tour with add ons
Did waiu-te-Pau as well. Well informed guide who made us feel welcome and kept us refreshed. Was amazing to see…
Read more

tomast907
11
A perfect day!
The tour was so perfect! Everything on time and the cheeky driver, Michael, was very attentive and friendly! I…
Read more

Excursion606979
10
Shirley
The tour inside Hobbiton was a bit rush. Not sufficient time to take pictures. I prefer to be more relaxed to…
Read more

islandpridez
10
Excellent Tour
Our tour guides Andre and Emelia were excellent, learned alot about New Zealand from them. It was a long ride from…
Read more