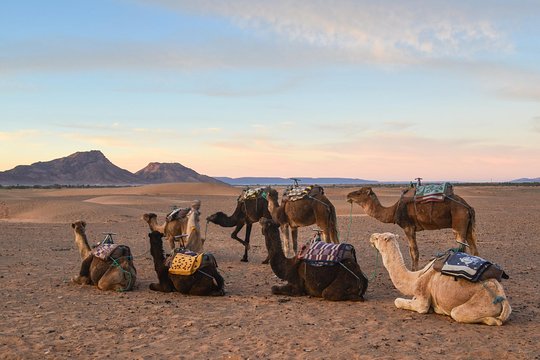 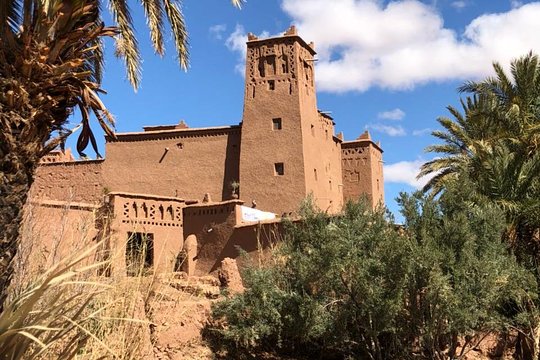 Select Date and Travellers
From
US$269.31
Date
2 travellers
Free Cancellation up to 24 hours in advance
Low Price GuaranteeNo Booking Fees
Overview
Highlights
What to Expect
Itinerary

Day 1: Marrakech to Zagora via Ouarzazate

Stop At: Zagora Markets, N12, Zagora 47900 Morocco
One of the most interesting ways to discover spectacular insights into the kingdom known as Morocco , starting from Marrakech crossing the impressive high atlas with its different colors red , green , yellow and brown mountains , fortified villages inhabited by berber population who have maintained intact their customs and traditions through time, via Tizi n Tichka pass 2260 meters high meaning the hard pass. Trespassing close to some interesting salt mines and continuation to the Kasbah Ait Ben Haddou a wonderful 11th century, fortified village perched on high and a real architectural, a jewel built of beaten earth , it becomes one of UNESCO's world heritage sites in December of 1987, the visit takes 45 minutes , and then our tour heads to Zagora via Ouarzazate crossing the valley of Draa which is considered one of the loveliest areas in morocco also known as the Draa valley, earth-built settlements located around the oasis in particular , once we get to Zagora, we drive south to the village of Tamgrout a real gateway to the desert , this small settlement is surrounded by a lush palm grove and many mosques with roofs of blue-green tiles are evidence of its historic, and contemporary ,religious role , in the 17th century , after this historic village we return back to Zagora, where we will leave our vehicle to ride the camels which will take us to the camp .
Duration: 1 day

Stop At: Ouarzazate Kasbah, Tifoultoute - BP 740 -، P1516, Ouarzazate 45000, Morocco
After sunrise pictures you can have your breakfast early in the  morning, then we will take our camels again, when the camel ride is over we will drive back to Marrakech through Ouarzazate where we can visit the cinema studios that served as a decor for many famous movies for example , the Mummy , the Mummy Returns , the Last Temptation of The Christ... Of course you have all the time to take pictures .

End of the tour in Marrakech.
Duration: 12 hours

Meals included:
• Breakfast
No accommodation included on this day.
Show More
Important Information
Departure Point
Traveler pickup is offered
The departure will be from the client's accommodation
Departure Time
8:00 AM
Duration
2 days
Inclusions
Exclusions
Show More
Additional Info
Cancellation Policy
For a full refund, cancel at least 24 hours in advance of the start date of the experience.
4Reviews2Q&A

Write a review
Traveller rating
Traveller type
Time of year
Language
Selected filters
dieallmendingers wrote a review Nov 2017
Orlando, Florida1 contribution2 helpful votes
Best family trip
We spent about ten days in Marocco and all the time a young men, Taoufig, was our driver. He was an excellent, calm, smart and safe driver, the best a family with kids could have - Thank you verx much for excellent driving, Taoufig! And many greetings from Germany!!!
Read more
Date of experience: November 2017
1 Helpful vote
Helpful
Share
Response from Momo M, Owner at 02 Days Marrakech - Ouarzazate - Zagora
Responded 28 Nov 2017
On behalf of Taoufiq thank you very much, this review is an excellent support for both Taoufoq and adventure masters staff as well. May be next time we can provide you, more tours like the high Atlas 3 valleys day trip, for example. Anyway we hope to keep as your link in Morocco, anytime you want. Mohamed.
Read more
fvandenend wrote a review Nov 2017
Dordrecht, The Netherlands1 contribution
Terrific
We liked the trip very much. We are a Family with 4 children. Marocco is really a nice country to visit. The dessert trip with camels was really amazing. We were a little apprehensive at first but every body was so friendly. Special thanks to our guide Abdoul. He speaks his…
Read more
Date of experience: October 2017
1 Helpful vote
Helpful
Share
Response from Momo M, Owner at 02 Days Marrakech - Ouarzazate - Zagora
Responded 28 Nov 2017
Abdoul was so honored to serve you, and so were Adventure Masters staff, please keep in touch with us, anytime you want to see Morocco. Thank you very much for your support. Mohamed.
Read more
About the operator 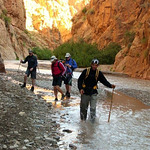 toubkaladventureinmo
Imlil, Morocco
27
Tamadotmohamed@gmail.com
Hello my friends. I would like to tell you about a tour that I took in one of the regions of southern Morocco. …
Read more

Tabbytatt
Sale, United Kingdom
1111
Highlight of our stay in Marrakech. Atlas Mountain tour.
The day trip to the High Atlas Mountains is amazing. We stopped to take pictures of the breath taking scenery on a…
Read more 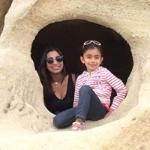 693karimaj
Istanbul, Turkey
30
Birthday celebration
We were 10 women on a weekend trip to celebrate my birthday. Said our driver was fantastic. Took us all over…
Read more

epofloh
Frankfurt, Germany
10
Daytrip Marrakesh Atlas
Had a great tour with guide Aziz to the Atlas mountains, visiting the three valleys, an argan oil store and a…
Read more

Sissiedee
12
Great day in the mountains
Aziz our driver was excellent, catered to our every need. Extrastops when I asked for the pharmacy...no problem.…
Read more 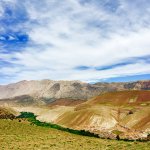 756st_phanieg
114
Best drive done
Thanks to Aziz for the drive: secure pleasant nice and professional. Best driver I ever had with nice advice for…
Read more

Sam H
Dallas, Georgia
20
Driver
Ifsar Sherif was my driver to the Atlas Mountains on 15 October 2019. He was a most wonderful companion for this…
Read more

vonnieponnie
Amsterdam, The Netherlands
11
Atlasmountain
It was a great day with our guide and driver Saleh. He drove us around not through the normal road but in the…
Read more

Khan-pak
10
Breathtaking sights!
Salah is an excellent driver,very engaging and knowlegeable. Our trip to the waterfalls, the desert and the beach…
Read more