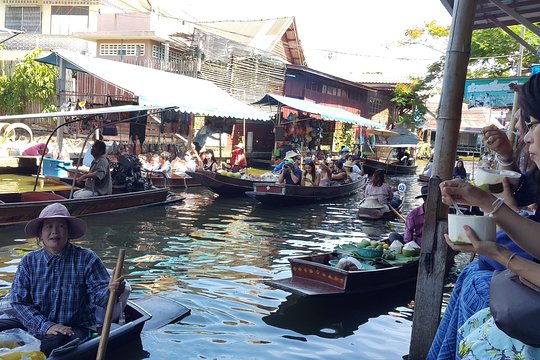 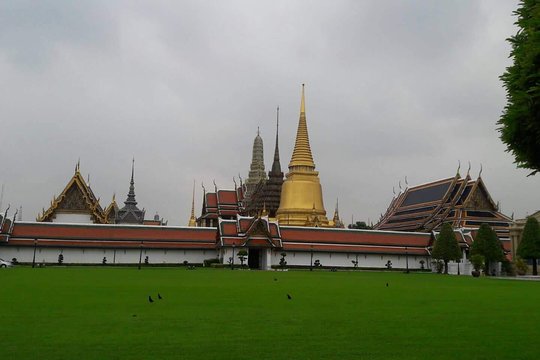 Damnoen Saduak District, Ratchaburi located about 100 kilometres of Bangkok, Thailand. floating market  is the most famous floating market. In 1866 King Rama IV have the commuting project along Damnoen Saduak Canal was constructed to connect the Mae Klong. Damnoen Saduak Canal never have low season, people transfer by boat, have lunch in the boat and work on the boat. There are Thai tradition life stye and Thai house wood architect beside as Very long Curve complex Block Floating Village of this area. Only travel to get there by Longtrail Boat.
•

Mae Klong Railway Market is the most famous Railway market. This culture was happen when the vendor want to display their good to the train passenger.
•

Grand Palace is One of the Top Ten tourist attraction of Thailand. the Grand Palace was built in 1782 during the reign of King Rama I, the founder of Chakri Dynasty, use for a royal residence and royal guess reception. Center of Thai people and the administration which the King is ruling in the Absolute monarchy.

Temple of the Emerald Buddha

The Green Jedi Jade Emerald Buddha is a spiritual of Thai people. Emerald Buddha has a long selfsame journey transversely across the border by means of Thai nation protector. It belong to the king as long as the age older than 500 years ago. Temple of the Emerald Buddha is now used for Royal ceremonial purposes only.
• The landlord god of Brahmin Zun.  The four-faced Buddha is not a Buddha, but the three kings of Brahmin.The king has four faces, which symbolizes that "four infinite hearts are compassion of liveliness. She, the faith of Thai believers, and the worship of tourists from all over the world, especially those from Hong Kong and Taiwan. According to Hong Kong travellers, a giant has been affected by financial turmoil and business is about to close down. "When I came to Thailand to take refuge, it was difficult to solve this problem. When I got back to Hong Kong and got an interview with a journalist, I told the story and sensationalized Hong Kong." Since then, the incense has been more prosperous. So some tourists want to The four-faced Buddha made a wish and made many trips to and from Thailand. There are many Hong Kong film stars. All four-faced Buddhas are Hong Kong stars to help advertisements. Worship the four-faced Buddha, the first side blesses peace, the second side is successful, the third side loves, the fourth side seeks wealth.
• CentralWorld: The Largest Lifestyle Shopping Destination included with the variety goods from Luxury to Hi-street.