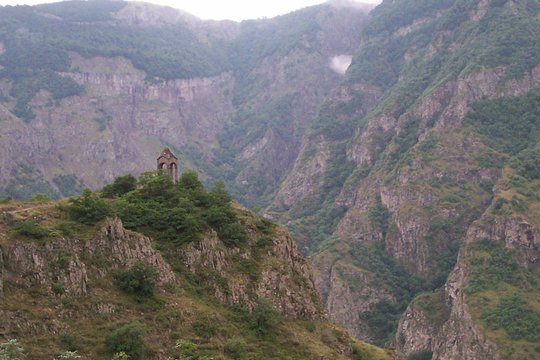 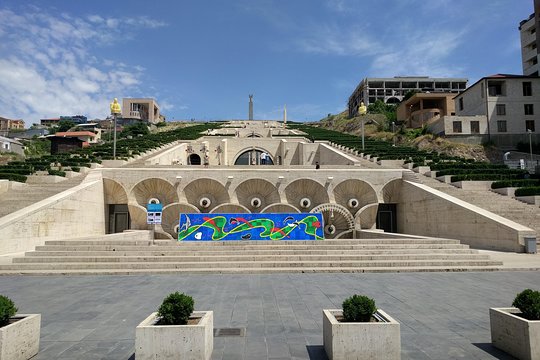 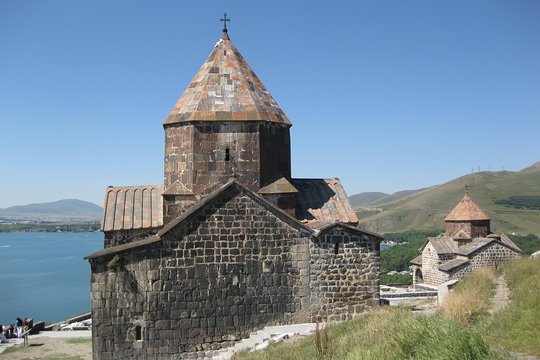 Stop At: Cascade Complex, 10 Tamanyan St, Yerevan 0009, Armenia
During second half of the day we will head to explore Yerevan, a city that is older than Rome (782 BC) and one of the world's oldest continuously inhabited cities. We will visit Cascade complex - a giant stairway made of limestone . It links the downtown area of Yerevan with the Victory Park neighborhood. At the base of the Cascade is a garden courtyard with statues by contemporary sculptors such as Botero, Lynn Chadwick, and Barry Flanagan.
Duration: 35 minutes

Stop At: The Armenian National Academic Theater of Opera and Ballet named after Alexander Spendiaryan, Tumanyan O. str. 54, Yerevan 0002 Armenia
Our next stop is Opera Theatre which is considered to be the symbol of music culture of Armenia.
Duration: 10 minutes

Stop At: Republic Square, Yerevan Armenia
Republic Square- an architectural ensemble of five major buildings surrounding the square and built in pink and yellow tuff in the neoclassical style with extensive use of Armenian motifs. There we will enjoy dancing fountains.
Duration: 35 minutes

Stop At: Gum Market, 35 Movses Khorenatsi Street, Yerevan 0018, Armenia
Next we will head to the biggest dried fruit market in Yerevan, where you can find and purchase the tastiest in the world dried Armenian fruits.
Duration: 40 minutes

Stop At: Ararat Museum, 2 Admiral Isakov Ave, Yerevan 0082, Armenia
Wait a minute. We will visit famous Ararat Brandy (Cognac) factory. Here we will have tour and get introduced to Armenian cognac history and sure will taste the famous cognac, which was favored by Winston Churchill.
Duration: 45 minutes

Stop At: Khor Virap, Artashat, Lusarat Armenia
Get ready to watch Mt Ararat, we will get very close to it. Afret breakfast we will drive to Khor Virap, which notability as a monastery and pilgrimage site is attributed to the fact that Gregory the Illuminator was initially imprisoned here for about 14 years by King Tiridates III of Armenia, who later in 301 AD declared Christianity as state religion in Armenia.
Duration: 40 minutes

Stop At: T'rchuneri (Bird) Cave, Highway, At the Entrance To Noravank Canyon, Areni Armenia
Our next stop - Areni 1 cave, is very close to Noravank. The Areni-1 winery also known as Bird Cave is a 6100-year-old winery that was discovered in 2007 by a team of Armenian and Irish archaeologists, sponsored by UCLA and National Geographic Society among others. The winery consists of fermentation vats, a wine press, storage jars, pottery sherds, and is believed to be at least a thousand years older than the winery unearthed in Judea and Samaria. The Areni-1 shoe (a 5,500-year-old leather shoe ) was found in the same cave.
Duration: 35 minutes

Stop At: Noravank Monastery, Areni Armenia
Further, we will head to another masterpiece of Armenian architecture - Noravank. This 13 century monastery is situated in a amazing gorge with tall, sheer, brick-red cliffs and is best known for its two-storey Surb Astvatsatsin (Holy Mother of God) church, which grants access to the second floor by way of a narrow stone-made staircase jutting out from the face of building, one of the earliest examples of cantilever architecture.
Duration: 40 minutes

Stop At: Shaki Waterfall, Sisian Armenia
Thats not all. Now time to enjoy the highest waterfall in Armenia, named Shaki. This picturesque waterfall is 18 m high and can mesmerize you for a long time.
Duration: 30 minutes

Meals included:
• Breakfast
• Lunch: We will have wine tasting, since we are in the region famous for its wine making.
• Dinner
Accommodation included: Overnight in Goris city

Stop At: Old Khndzoresk, Khndzoresk, Near Goris Armenia
Breakfast in the hotel and departure. Our first stop is Khndzoresk- historic cave village, located on the steep slope of a gorge and comprised of both natural and manmade caves.
Duration: 50 minutes

Stop At: Khndzoresk Swinging Bridge, M12, Yerevan 0032 Armenia
Khndzoresk is famous for its swinging (cable) bridge to access which you need to decent about 420 stairs into the gorge.
Duration: 45 minutes

Stop At: Wings of Tatev, H45, Tatev 3218, Armenia
We will get to Tatev monastery by riding the longest cable car in the world (Guiness Record Book).
Duration: 15 minutes

Stop At: Tatev Monastery, Tatev Armenia
Head to Tatev Monastery-a 9th century historical monument. The monastic ensemble stands on the edge of a deep gorge of the Vorotan River. During medieval times Tatev Monastery was a vital scholastic, enlightenment and spiritual center and played a huge role in the country’s history.
Duration: 1 hour

Stop At: Yeghegis Jewish Cemetery, Yeghegis Armenia
Next we will visit Jewish cemetery in Vayots Dzor region near Yeghegis river. The cemetery belonged to the Jewish community which lived in Yeghegis in the 13th-14th centuries.
Duration: 30 minutes

Stop At: Selim Caravanserai, Vardenyats Pass, Aghnjadzor Armenia
After breakfast we will drive towards lake Sevan. We will be passing Vardenyats pass and will have short stop at Orbelian caravanserai. Vardenyats Pass is a high mountain pass at an elevation of 2.410m (7,906ft) above the sea level. The pass was known as the Selim Mountain Pass or Sulemayi Lernants’k’. The pass climbs through the Vardenis Mountains and provides access to Lake Sevan from vayots dzor region. Orbelian's Caravanserai, also known as Sulema Caravanserai and Selim Caravanserai was built along the Vardenyats Mountain Pass in 1332 to accommodate weary travelers and their animals as they crossed from, or into, the mountainous Vayots Dzor region.
Duration: 30 minutes

Stop At: Noratus Cemetery, Noratus Armenia
Passing along the shore of Sevan lake (more on that later) we will stop at Noratus cemetery-a medieval cemetery with a large number (800) of early khachkars. A khachkar, also known as an Armenian cross-stone is a carved, memorial stele bearing a cross, and often with additional motifs such as rosettes, interlaces, and botanical motifs. Khachkars are characteristic of Medieval Christian Armenian art. Since 2010, khachkars, their symbolism and craftsmanship are inscribed in the UNESCO list of Intangible Cultural Heritage.
Duration: 40 minutes

Stop At: Hayravank Monastery, Hayravank Armenia
Hayravank monastery is our next stop. It is a 9th to 12th century Armenian monastic complex consisting of a church, chapel, and gavit. On a short distance from the site, are the remains of Bronze Age through medieval fortification walls and foundations of a settlement.
Duration: 40 minutes

Stop At: Yenokavan Canyon, Ijevan State Sanctuary, Yenokavan Armenia
After breakfast we will drive to Yenokavan eco village. Being located in the heart of the astonishing Yenoqavan mountains, it is a real paradise for those who want to combine adrenaline and eco environment. It attracts adventure and nature lovers from the whole region. Park offers more than 10 unusual and creative activities (including zipline), which you can enjoy at additional price. Otherwise you can walk and enjoy the incredible nature.
Duration: 1 hour

Stop At: Dilijan National Park, Dilijan Armenia
Further, we will drive to Dilijan town. Dilijan is a town with mild climate and fresh air and is famous for its lovely surroundings, called the "Armenian Switzerland" by the locals, due to the densely forested valleys and mountains with alpine meadows surrounding them.
Duration: 30 minutes

Stop At: Monastery Sevanavank, next the Holy Mother of God Church, Sevan Armenia
Next, we will drive towards lake Sevan- the largest freshwater high-altitude (alpine 1900 m above sea level) lakes in Eurasia. We will visit Sevanavank on Sevan peninsula, take out your cameras and get ready for breathtaking views. Sevanavank is a monastic complex located on a peninsula at the northwestern shore of Lake Sevan and according to an inscription in one of the churches, the was founded in 874.
Duration: 50 minutes

Stop At: The Monastery of Geghard, Geghard Armenia
Our first stop today is Geghard (meaning "spear") monastery dating back to 4th century. The monaster is partially carved out of the adjacent mountain, surrounded by cliffs and is listed as UNESCO heritage.
Duration: 1 hour

Stop At: Garni Temple, Geghard Monastery Road H3, Garni Armenia
Next stop is Garni pagan temple - the only Greco-Roman collonaded temple in the region. It is the best-known and preserved structure and symbol of pre-Christian Armenia.
Duration: 40 minutes

Stop At: Garni Gorge, Route Below the Garni Temple, Garni 2215 Armenia
Let's head to Symphony of Stones. If you have not seen Symphony of Stones, you have not been in Armenia. Along the sides of the Azat river canyon are cliff walls of well-preserved hexagonal basalt columns referred to as the "Symphony of the Stones." These columns are known as “Columnar jointing”, which occurs when the volcanic rock cools and contracts, forming a network of hexagonal columns.
Duration: 40 minutes

Stop At: Vernissage, 1, 3 Buzand St, Yerevan 0010, Armenia
Driving back to Yerevan for shopping. We will take you to Vernissage- an open air handicraft and souvenir market, where you can find anything a tourist might look to take with him/her.
Duration: 2 hours

Meals included:
• Breakfast
• Lunch: Here we will have master class – preparing Armenian bread lavash and not only.
• Dinner
Accommodation included: Overnight in 3* hotel in Yerevan.

Write a review
Traveller rating
Traveller type
Time of year
Language
Selected filters
Evangelina Crain wrote a review Nov 2019
Vienna, Austria4 contributions
A country of contrasts, people that you fell in love with
The program title speaks for itself, you literally discover this country. You learn the rich culture, you enjoy the cuisine, which again is the part of culture, you live the history they have lived for centuries in this short tour. And you feel the warmth of people just passing…
Read more
Date of experience: October 2019
Helpful
Share
About the operator

Evangelina Crain
Vienna, Austria
20
A country of contrasts, people that you fell in love with
The program title speaks for itself, you literally discover this country. You learn the rich culture, you enjoy…
Read more

Kori Naylor
Sydney, Australia
20
A country worth visiting, a service provider you might want to choose
Dived into the rich history and culture of this nation, never thought it will be like this. I used to hear that…
Read more