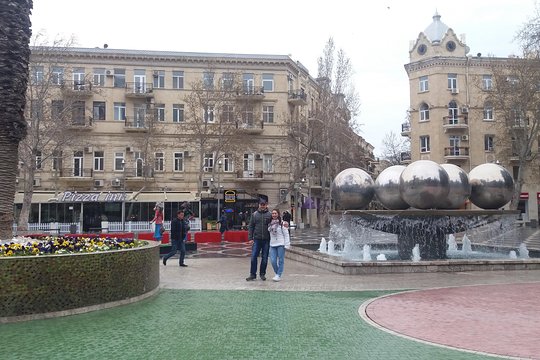 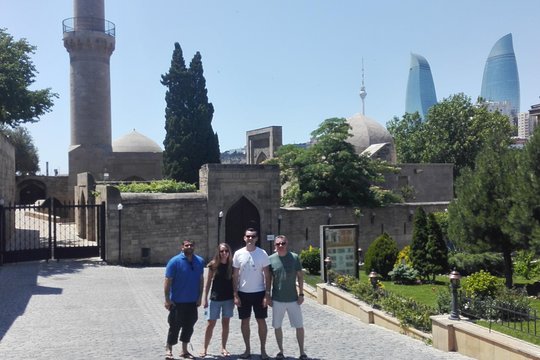 Select Date and Travellers
From
US$66.67
(Price varies by group size)
Date
2 travellers
Free Cancellation up to 24 hours in advance
Reserve Now & Pay Later
Low Price Guarantee
Overview
Highlights
What to Expect
Delve into the past and modern parts of Baku on 4-5-hours walkin g tour around Old City and in the modern parts with a informative and friendly guide. This tour is great for those who would like to get a maximum of information about the history of Baku and the traditions of the Azerbaijani people in a short period of time.

Strolling through the old streets and look around the bathes, mosques of the medieval times, architectural buildings of oil boom period, museums, boulevard, squares, gardens, parks, alleys of Baku and Flame towers

Enjoy engaging and informative narration by our guides about history, culture of Baku and Azerbaijan, about the traditions and other interesting stories

Meet your guide at the Icheri Sheher mtero station entrance/exit and then set off on your 4-5-hours walking tour to explore the most ancient part of Baku which is surrounded by walls were well protected, architectural buildings of oil boom period which are you can find in Istiflaliyyat street and then the such modern parts of Baku as Fountains square, Seaside Boulevard, Upland park and Flame towers.

You'll pass through the popular local restaurants, which are renowned for their traditional breakfasts with national bread "tandir" which is baked in authentic ovens. Also you will pass through the souvenir shops that sell antiquarians.
Show More
Important Information
Departure Point
Sahil Metro Station Exit
Departure Time
10:30 AM
Duration
4h
Inclusions
Exclusions
Show More
Additional Info
Cancellation Policy
For a full refund, cancel at least 24 hours in advance of the start date of the experience.
0Reviews1Q&A

abdulla1970
192
We loved old city in Baku
When you go around old city , we will smile the fragrant of the past, they have A good restaurants there, small…
Read more

Joan J
Newhall, California
375183
A delicious evening in Baku
Aydan took us on a wonderful walking tour of the lovely and elegant 19th century part of Baku, giving us a…
Read more

glaciershell
Shanghai, China
31
Must see in Baku
Gobustan and Mud volcanoes are must-see when you are in Baku. The tour price is so competitive, Aydan from Baku…
Read more

gf1349
Indianapolis, Indiana
15053
No show
We signed up for the free walking tour of the Old City, arrived at the appointed starting point 15 minutes early…
Read more

Vladimir K
Canton of Basel, Switzerland
52
Old Town Antalya
Leyla from Baku tours was a friendly guide, we had a nice morning walk around the old town, she showed us the key…
Read more

Lalarukh Thanvi
148
Tiring yet ravishing day long trip
Gabala or qabala is approx 3 to 4 hours drive away from main baku. Qabala is surrounded with mountains and you…
Read more