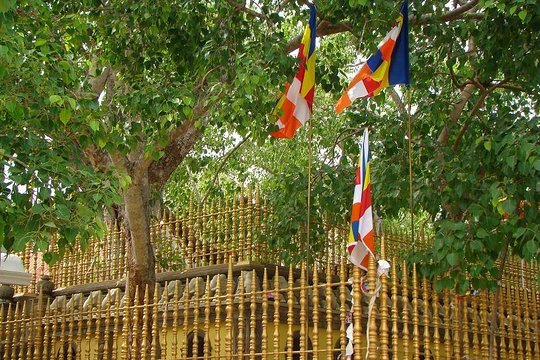 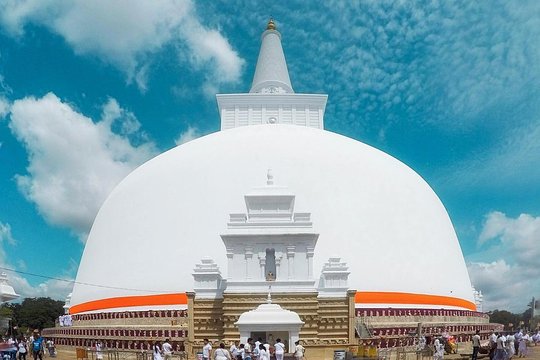 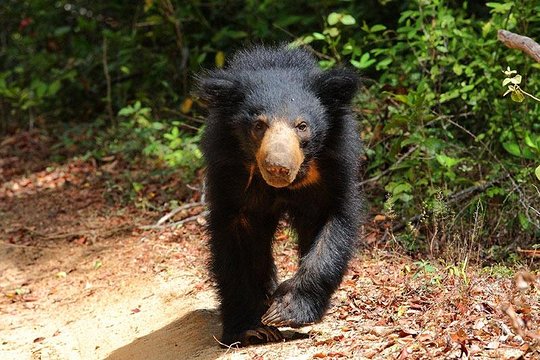 This product is unavailable to book via TripAdvisor. Contact the supplier for availability.
From
US$142.50
Free Cancellation up to 24 hours in advance
Low Price GuaranteeNo Booking Fees
Overview
Tread on sacred ground. Visit the place where one of the greatest civilizations of the ancient world flourished. Anuradhapura was the first capital of Sri Lanka founded in the 4th Century AD and it is one of the oldest continuously inhabited cities in the world. This UNESCO World Heritage site is a historical marvel with its well preserved ruins of this ancient civilization and Explore the largest National Park in Sri Lanka, for your tour in Wilpattu National Park, you will be taken on a jeep safari around the park to spot Sri Lanka’s wild animals such as elephants, jackal, sloth bear, leopard, wild buffalo, spotted deer, mongoose and many other species. An experienced driver will guide and take you along the routes that offer the highest probability of sighting these animals.
What to Expect
Itinerary
This is a typical itinerary for this product

The Aramaic complex of Abhayagiriya Viharaya was constructed in the reign of King Vattagamini Abaya (commonly known as King Valagamba) in the 1st Century BC. Today, the main attraction of this Aramaic complex is the massive Abayagiri Stupa which stands at 74.98 meters to the tip of the damaged spire. It is the second largest stupa in the island today. According to the 5th century traveler Chinese monk Fa-Hsien’s descriptions, this stupa has been 400 feet (122 meters) in height and has been decorated with gold and silver and studded with all kinds of jewels. There also has been a 20 foot (6.1 meters) high Buddha statue made out of green jade.

The sacred city of Anuradhapura has been nominated by the UNESCO as a World Heritage. The main reason for the historical city of Anuradhapura to become a sacred city was the Jaya Sri Maha Bodhi. This sacred tree has been planted in the historical Maha Megha Vana Royal Park in Anuradhapura in the month of ‘Unduvap’ (December), 236 BC, according to the written facts. The sacred Bodhi sapling has been ceremonially brought here by Arahant Sanghamitta Maha Theree, under instructions of Arahant Mihindu Maha Thero. King Devanampiyatissa who ruled Sri Lanka in this period has planted this Bodhi tree with great pageantry in the Maha Megha Vana Royal Park dedicated to the venerable bhikkhus. The present age of the Anuradhapura Jaya Sri Maha Bodhi is 2,247 years. Accordingly, the oldest tree of the whole world with a written history is the Jaya Sri Maha Bodhi of Anuradhapura.

Sacred to many Buddhists all over the world, the Ruwanwelisaya is a stupa, is also considered a marvel for its architectural value. It was built by King Dutugemunu who was best known for his great victory over the Chola King, Elara. It is one of the world’s tallest monuments, standing at 300 feet (91 m) and with a circumference of 950 ft (290 m).

Wilpattu National Park is the largest national park in Sri Lanka and is world renowned for its Leopard population! It is also one of the oldest, providing a unique scenery of a complex of natural shallow sand rimmed lakes called ‘Willus’. The Willus are surrounded by grassy plains, set within thick scrub jungle. The vast, ancient forest is composed of a remarkable variety of flora and is home to a large diversity of fauna. The park boasts the highest mammalian diversity and population in the country with thirty one mammal species found in the area, including Elephants, Sloth Bears, Water Buffalo and Spotted Deer. The Muntjac Deer are more readily seen in Wilpattu than any other national park in Sri Lanka! and The Willus of Wilpattu sustain abundant bird life with endemic species.

Duration: 3 hours
Show More
Important Information
Departure Point
Traveler pickup is offered
We pick up all travelers from any hotel in Negombo

Departure Time
7:00 AM
Duration
12h
Inclusions
Exclusions
Show More
Additional Info
Cancellation Policy
For a full refund, cancel at least 24 hours in advance of the start date of the experience.