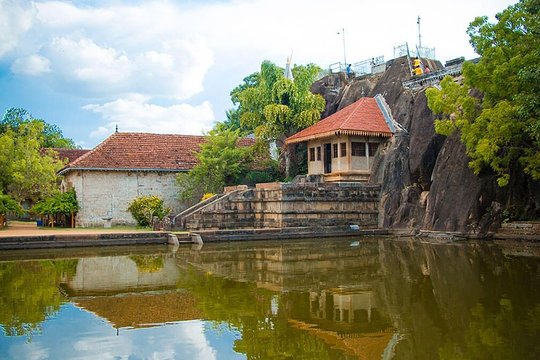 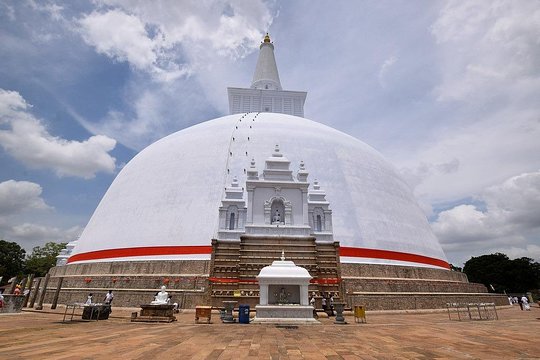 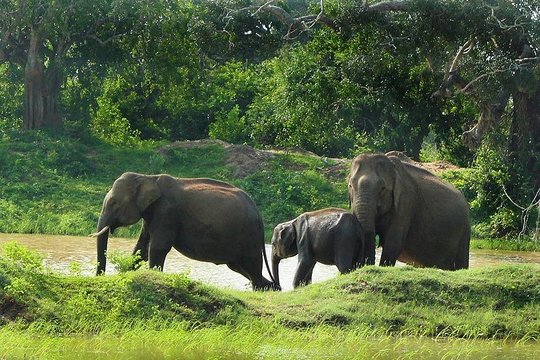 Select Date and Travellers
From
US$270.00
(Price varies by group size)
Date
2 travellers
Free Cancellation up to 24 hours in advance
Low Price GuaranteeNo Booking Fees
Overview
What to Expect
Itinerary

Stop At: Ruwanwelisaya Sthupa, Abhayawewa Rd, Anuradhapura, Sri Lanka
Ruwanweliseya, also known as the Swarnamali Maha Chaitya, is the most venerated and well-known stupa in Sri Lanka. Built by King Dutugemunu in 140 BC, it's a textbook example of the bubulakara (bubble-like) design of stupas. It's one of the world’s tallest monuments, standing at 103 meters with a circumference of 290 meters. Restoration of the stupa began in 1893, centuries after Anuradhapura had been abandoned to the jungle. The Venerable Naranvita Sumanasara Thero braved the malaria infested lands, collecting donations and enlisting the help of volunteers. The work was finally completed in 1940, with the "Sein Bu Crystal" gifted by Burmese Buddhists being affixed at the pinnacle of the stupa. Since then, the Ruwanweliseya has been one of the most visited sites of pilgrimage for Sri Lankan Buddhists. The expansive maluwa (seating area around the stupa) can easily seat thousands of devotees. There are four smaller replica stupas on the four corners of this area. The area surrounding the stupa has thousands of brick and granite ruins. This was once the centre of the Mahavihara complex, the heart of Theravada teaching. The tripitaka was studied and preserved here, and later spread to Burma, Thailand and the rest of the Buddhist world.
Duration: 30 minutes

Stop At: Sri Maha Boodhi Temple, Anuradhapura Sri Lanka
The sacred city of Anuradhapura has been nominated by the UNESCO as a World Heritage. The main reason for the historical city of Anuradhapura to become a sacred city was the Jaya Sri Maha Bodhi. This sacred tree has been planted in the historical Maha Megha Vana Royal Park in Anuradhapura in the month of ‘Unduvap’ (December), 236 BC, according to the written facts. The sacred Bodhi sapling has been ceremonially brought here by Arahant Sanghamitta Maha Theree, under instructions of Arahant Mihindu Maha Thero. King Devanampiyatissa who ruled Sri Lanka in this period has planted this Bodhi tree with great pageantry in the Maha Megha Vana Royal Park dedicated to the venerable bhikkhus. The present age of the Anuradhapura Jaya Sri Maha Bodhi is 2,247 years. Accordingly, the oldest tree of the whole world with a written history is the Jaya Sri Maha Bodhi of Anuradhapura.
This tree belongs to the family of trees known as ‘asvastha’ in Sanskrit, ‘asvattha’ in Pali, ‘aesatu’ in Sinhala. Botanists have named it ‘ficus religiosa’ taking into account its religious significance.
Duration: 1 hour

Stop At: Isurumuniya Temple, At Royal Pleasure Gardens, Anuradhapura 50000 Sri Lanka
The Meghagiri Vihara is now commonly known as Isurumuniya Vihara or Isurumuniya. But the real Isurumuni Vihara is located few hundred metres away is now called Vessagiri Vihara. Isurumuniya is most famous for the stone carving of a couple located there. This carved stone was found in the royal pleasure garden and brought here. There are many interpretations for this carving. The most popular is that this carving shows the prince Saliya (the son of the great king Dutugamunu) and his mistress Asokamala. Asokamala was of a lover cast called “Chandala” and the prince Saliya gave up the right to be the king by marrying this girl of a lower cast. Another belief is that this couple represent the god Siva and goddess Parvathi of Hindu belief. The vihara also has another stone slab which depicts a court scene which is thought to be the court of king Dutugemunu. Both these stone slabs are thought to be originated in the 8th century. The vihara itself is built on a rock and the sacred tooth relic of Buddha has been originally kept here when it arrived to the island from India in the 312 AC.
Duration: 1 hour

Stop At: Jethawanaramaya Stupa, Watawandana Road B341, Anuradhapura 50000 Sri Lanka
Jethawana Stupa is the largest stupa in the Sri Lanka. It was originally 400 feet (122 meters) in height and was the third tallest building in the world at that time. Even today as a brick monument, Jethawanaramaya still remains the tallest of its kind in the world. Jethawanaramaya was built by King Mahasena of Anuradhapura (276-303) was completed by his son Sirimeghavanna. It is believed that this monument was built upon the enclosure where Mahinda Maha Thero was cremated. Recent excavation in the stupa has unearthed a one meter thick brick wall adjacent to a layer of ash and charcoal. This is believed to be the chamber where the remains of the great thero rest.
Duration: 30 minutes

Stop At: Abhayagiri Dagaba, Watawandana Rd, Anuradhapura 50000 Sri Lanka
Abhayagiriya is one of the prominent stupas of the Ancient Anuradhapura kingdom and also one of the places of Solosmassthana (the list of 16 prominent worship places of a Buddhist). This famous world stupa was built by the Kind Valagamba, who is also known as the King Vatta Gamini Abaya was constructed in the 1st century BC. As per the Chinese monk Fa – Hien, who visited Sri Lanka in the 5th Century BC, Abayagiriya was 122 meters in height decorated with gold and silver and studded with precious jewels. Furthermore, as per the records of this monk, there was a 20ft tall Buddha statue which was sculptured from Jade. Abhayagiriya is said to have been a monastery for Theravada Mahayana and Vajrayana sects of Buddhism. The visit to Abayagiriya stupa could take you back to a thousand years, due to its rough nature.
Duration: 30 minutes

Meals included:
• Breakfast
• Lunch
No accommodation included on this day.
Show More
Important Information
Departure Point
Traveler pickup is offered
We pick up all travelers from any hotel in Negombo or Colombo