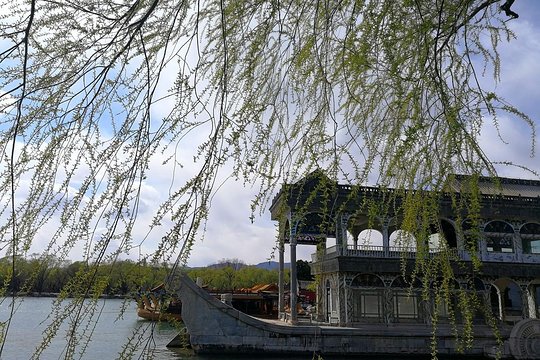 Stop At: Tiananmen Square (Tiananmen Guangchang), West Changan Street, Dongcheng District, Beijing 100006 China
Today, you will start the tour by visiting the largest city square in the world, Tian'an men Square that is located in the very center of Beijing. You will walk through the square and make a few stops to see (outside view) the main gate to the imperial city, Chairman Mao's Mauseleum, the Parliament, National Museum, People's Monument etc significant buildings of historical and cultural values.
Duration: 30 minutes

Stop At: Forbidden City-The Palace Museum, No.4 Jingshanqian Street, Dongcheng District, Beijing 100009 China
Forbidden City has been the imperial palaces from 1420 to 1911 going through two feudal dynasties and ever housed 24 emperors of different reigns. It's covering an area of 72 hectares, has 9999 rooms in total, about 10,000 people lived in, you will find it impressive to see palaces just go on and on that Forbidden City is not only a name but a real city, let alone the history and stories happened during the 500 years. Your guide will give explanations from time to time for a structural and educational understanding of the whole area.
Duration: 2 hours

Stop At: Temple of Heaven, Tiantan Road, Dongcheng District, Beijing 100050 China
Among the four altars for celestrial worshipping, Temple of Heaven was the most important one for wishing a good harvest in feudal China. Temple of Heaven was built at the same time with the Forbidden City by the third emperor of the Ming Dynasty, the area is three times as large as that of the Forbidden City with trees and lawn taking up the major area, which enables locals to stay and relax especially for the elderlies. You will visit the highlight of the Temple of Heaven, the Hall of Prayers for a Good Harvest as well as the area that locals gather for singing, dancing, playing chess and cards or for exercises.
Duration: 1 hour 30 minutes

Stop At: Pearl Market (Hongqiao Market), 9 Tiantan Rd, Beijing China
Originally Hongqiao Market was a market only for pearls, hence the name Pearl Market. In the recent years, it was upgraded into a comprehensive market that sells everything including electronics, glasses, watches, bags, shoes, clothing, toys, souvenirs etc and of course pearls is still a big part of it, since it's the largest fresh water pearl selling center in the northern China. You will have 1.5hr free time to explore the market, find the commodities of very good cost performance and enjoy bargainning, everyone loves the place!
Duration: 1 hour 30 minutes

Stop At: Mutianyu Great Wall, Mutianyu Village, Bohai Town, Huairou District, Beijing China
We chose Mutianyu Great Wall was because it's one of the most beautiful part of the wall and at the same time it's not crowded for the most of time. Today, drvier and guide will pick you up from the hotel in the morning and drive for 1.5hrs to Mutianyu, where you will ascend the wall with chairlift, hiking on the wall for 1.5hrs and come down the mountain with toboggan ride by yourselves. This is an additional amusing activity attached to sightseeing at the World Heritage. Note: If you are over 60 years old, you will have to come down with chairlift instead of toboggan.
Duration: 2 hours

Stop At: Lama Temple (Yonghegong), No.12 Yonghegong Street, Beixinqiao, Dongcheng District, Beijing 100007 China
Yonghegong is the largest Lama temple in the northern China that has been existing since Emperor Yongzheng's reign about 300 year ago. You will start the day by visiting the place for its history, principles of Buddism, joy of inner peace, broad mind, utmost happiness as well as a Guinness Recorded largest buddha statue out of a single tree trunk. No matter you have a religion or not, you can always pray here for wishes.
Duration: 1 hour

Stop At: Olympic Park, North of Beisihuanzhong road, Chaoyang District, Beijing 100101 China
After the Lama Temple, you will drive to the Olympic Park, which is the main venue of the 2008 Beijing Olympic Games, where you will see the main stadium Bird's Nest and the swimming and diving center Water Cube. The park is on the central axis of Beiijing Layout that was created especially for the event. Oval and Square are the shapes of the two buildings reflecting the ancient belief of Chinese that the sky is a round while earth is a square. Immensity of the area would release the worries and anciety everybody could have nowadays and remind you of the great power that peace, friendship and great unity of mankind carries.
Duration: 1 hour 30 minutes

Stop At: Summer Palace (Yiheyuan), No.19 Xinjian Gongmen Road, Haidian District, Beijing 100080 China
After lunch, we organized a relaxing walk for you in the Summer Palace by the lakeside. Known as an imperial garden to avoid summer heat, Summer Palace boasts the perfect combination of the natural view of mountain ranges,hill and manmade picturesque lake, gardens and palaces designs. Though it's a luxury demonstration, it has history of darkness, listen to your guide's explanations, you will find it profound.
Duration: 1 hour 30 minutes

Meals included:
• Lunch
No accommodation included on this day.
Show More
Important Information
Departure Point
Traveler pickup is offered
We pick up from any hotels that are located in the city center
Departure Time
9:00 AM
Duration
3 days
Inclusions
Exclusions
Show More
Additional Info
Cancellation Policy
For a full refund, cancel at least 24 hours in advance of the start date of the experience.