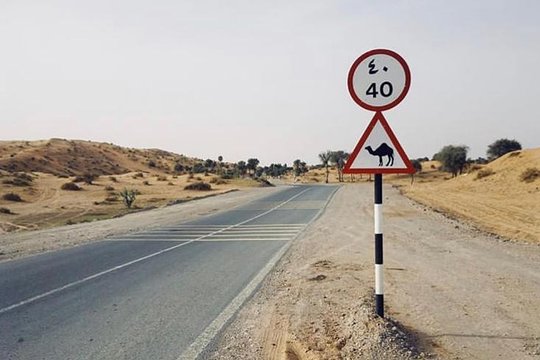 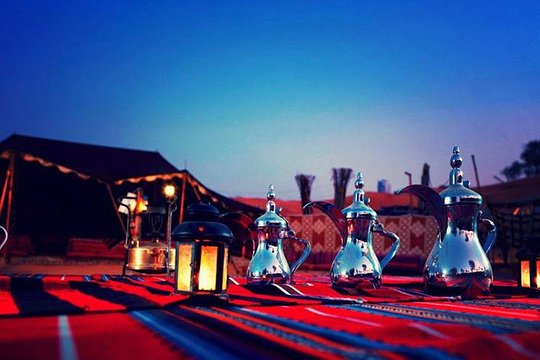 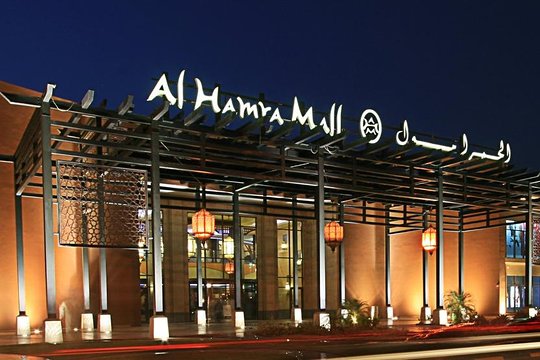 Likely To Sell Out
Select Date and Travellers
From
US$440.00
Date
2 travellers
Options
Free Cancellation up to 24 hours in advance
Low Price GuaranteeNo Booking Fees
Overview
What to Expect
Itinerary

Stop At: Dhayah Fort, Rams-shaam Rd, Ras Al Khaimah United Arab Emirates
This 16th-century mud-brick fort, about 20 kilometers north of Ras Al-Khaimah city, was built in a strategic hilltop position facing the gulf to defend the region from attack by the British. As a defensive military tower, the Dhayah Fort played an important role in the history of Ras Al-Khaimah.

Other ruined fortifications and watchtowers can be seen to the south of the hill. A battle in 1891 between the emirate and British forces resulted in the destruction of much of the fortifications here. The panoramic views from the fort's ramparts are well worth the trip here, and for anyone interested in history, exploring the fort itself is one of this small emirate's top things to do.
Duration: 30 minutes

The Qawasim Room on the first floor is particularly interesting, with a collection of documents, manuscripts, and treaties between the rulers of Ras Al-Khaimah and Great Britain. There are also exhibits of traditional weapons belonging to the ruling family, as well as archaeological displays about the earliest settlers in the area up to the late Islamic period. The museum's ethnographic section introduces traditional life in the emirate, including architecture, pearl diving, date growing, farming, and fishing.
Duration: 45 minutes

Stop At: Corniche Ras al Khaimah, Ras Al Khaimah United Arab Emirates
In Ras Al Khaimah city there are two main Corniches: the first one is the old Ras Al Khaimah corniche which is located opposite the Kuwaiti Souq. Here locals enjoy relaxing on the white beach while soaking in the sunset.
Duration: 15 minutes

​Excavations revealed the presence of an earlier mosque, dating back to the second half of the 18th century (date as indicated by preliminary analysis of the finds) Historical records indicate a mosque was at this place since the 16th century, but earlier version/s could not be found owing to the confined test trenches. With respect to the later 18th century mosque, excavations revealed that it was destroyed during the British occupation in 1819/20 and that a new mosque was built on its foundations. It has undergone several renovations and expansion phases up to the present day. During the renovation work, modern additions were removed from the inside and outside and the original architecture, built from coral stone and beach rock, restored and provided with an outer layer of traditional plaster in layer technique.
Duration: 20 minutes

Stop At: The Ghost Town of Ras Al Khaimah, Al Jazirah Al Hamra, Ras Al Khaimah United Arab Emirates
Frozen in time and and coated with a layer of ochre desert sand, Al Jazirat Al Hamra is a hamlet of perfectly-preserved Ras Al Khaimah history. And dust isn’t the only thing covering the town; it’s shrouded in mystery, surrounded by rumours and possibly even haunted by ancient ghosts.
Duration: 30 minutes

Meals included:
• Lunch
No accommodation included on this day.
Show More
Important Information
Departure Point
Traveler pickup is offered
We do pick ups from all over city hotels in Dubai.
Duration
2 days
Inclusions
Show More
Additional Info
Cancellation Policy
For a full refund, cancel at least 24 hours in advance of the start date of the experience.

347kumars
11
AMazing
It was really good experience with Oberon tours. Staf and management are very friendly and flexible. We enjoy our…
Read more

ssw2020
11
Lotus Yacht Marina
I really appreciate Mr. Zulfiqar for arranging the schedule in such short time over. We really had a beautiful…
Read more

347lesj
11
An AmazingTour Guide Experience!
This was one of the best tour guide Iv been on. Oberon Tour group are great at ensuring that their clients are…
Read more

Suparna S
Bengaluru, India
32
Dubai City Tour was an extravaganza for our eyes
Dubai City tour was really unforgettable experience for us for two things 1. Dubai is such classic example or a…
Read more

Suparna S
Bengaluru, India
32
Dubai City Tour was an extravaganza for our eyes
Dubai City tour was really unforgettable experience for us for two things 1. Dubai is such classic example or a…
Read more

Camera2020
42
Dubai tour
Prompt and courteous, our fantastic guide Shakeeb did a marvelous job taking us about old and new Dubai. Not only…
Read more

sayeda_dh
12
Great tour to visit the unknown or less known part of the Emirates
I did the 5 emirates tour in a day with the company and let me tell you, I had a lot of fun. Scenery is beautiful…
Read more

Ihsan1234O
11
An unforgetable experience!!
Had a wonderful vacation in dubai...It will be always an unforegtable trip in my life...Me and my friends really…
Read more

Chuks O
21
Sir
From our first meeting with Oberon Tours Management in Dubai to plan our holiday tours, to the wonderful Tour…
Read more

Zaim341
10
A trip of a lifetime!!
A fabulously varied and excited trip.. it was fantastic experience and we are very glad we chose the right company…
Read more

BankZ025
10
Exploration in Dubai and visit some very nice places
The tour was very nice and I can recommend it. The car is with AC and is very comfortable. The guide knows also a…
Read more