Private 3-Day Tour to Delhi, Agra and Jaipur from Hyderabad
By: Nikita Holidays 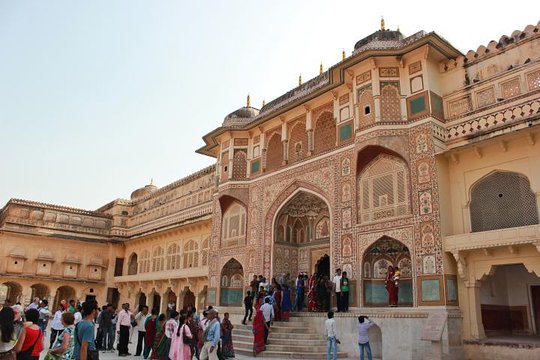 Pickup from Hotel or anywhere in Hyderabad as per your flight time and drop-off Hyderabad Airport and Flight to Delhi.

Pickup from Delhi Airport at 9am approx, then proceed on the half-day city tour of Delhi. In New Delhi you'll visit the 11th century Qutab Minar Tower, built by Qutub-ud-din Aibek of the Slave Dynasty, who took possession of Delhi in 1206. You'll also see the India Gate, a memorial raised in honor of the Indian soldiers martyred during the Afghan War, and drive past government buildings including the President’s House and Parliament House (dating back to the time of British Raj).

In the early evening you'll transfer to Agra (about 3 hours via expressway).

Note: Flight Tickets book by (Guest) own is own as per your time.

Day 2: Agra City Tour and drive to Jaipur (B)

Get picked up from your hotel at 6am for a sunrise visit to the world famous "monument of love," The Taj Mahal, a UNESCO World Heritage Site (closed Fridays). After breakfast, visit Agra Fort and then drive back to the old walled city of Jaipur. Founded by Maharaja Jai Singh II, this ‘pink city’ is meticulously constructed on the lines of the Shilpa-Shastra, an ancient Hindu treatise on architecture. The city's ancient palaces and forts have borne witness to countless royal processions and fabulous splendor.

You'll also make a stop to visit Fatehpur Sikri (own expanse), which has been described as the world’s most perfectly preserved ghost town. Built by Akbar in the late 16th century, it was abandoned after only 14 years, and the elegant buildings of this superb walled city remain intact to this day.

Day 3: Jaipur City Tour and drive to Delhi (B)

After breakfast, check out at 8am and proceed to visit the Amber Fort, which used to be the capital of the Kachhwaha clan until Jaipur was made the official capital in 1727. You'll also visit the Hawa Mahal, built in 1799 by Maharaja Sawai Pratap Singh, considered the most stunning sight in the city of Jaipur.

After lunch, proceed to the City Palace, the principal residence of the ruling family, known for its stunning architecture. Part of the palace is now converted into a magnificent museum. You'll also see Jantar Mantar, a stone observatory built in the 18th century.

Time permitting you will also get a look at Jaipur's cottage industry specializing in hand-woven carpets & textiles. Witness how silk carpets are made by hand.

Kayheu001
10
Amazing tour of Taj Mahal
Had an amazing day. Guides were communicative and helpful the day before the tour to confirm details. Car was new…
Read more

lga1978
Bengaluru, India
20
Great Trip
Airport pick up from Sanjay was on time. His car was clean and driving was great! He was very polite and bought…
Read more

Willwillbebill
10
amazing trip!
Very nice trip I enjoyed it a lot~ beautiful place. I visit a lot of tourist attractions here and I just love them
Read more

Travel2guru
20
Jaisalmer tour
The guide explained everything well. He was very helpful in finding an alternate hotel for us with heating. He…
Read more

469casperr
10
Rocky tourguide in Agra.
We had a great time with Rocky and Uma on our one day trip around Agra. He took us around to some exciting…
Read more

JuliaDupont61
41
Day trip to Taj Mahal and Agra from Delhi
Very friendly profesional service ! We enjoyed our visit to Agra and the safe journey by car. Excellent driver and…
Read more

jkclau
30
Rocky is an incomparable
Made my first visit to Agra. Glad to meet my local guide Rocky. He is very knowledgable and able to show me Agra…
Read more

Jon A
72
Jaipur City tour
We were picked up by our driver Om at 8.30 am after a drive from Agra. Om drove us everywhere, quickly and safely.…
Read more