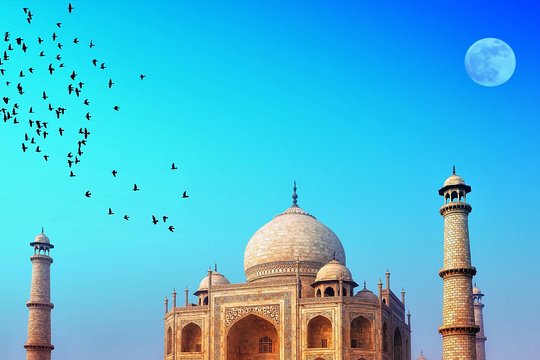 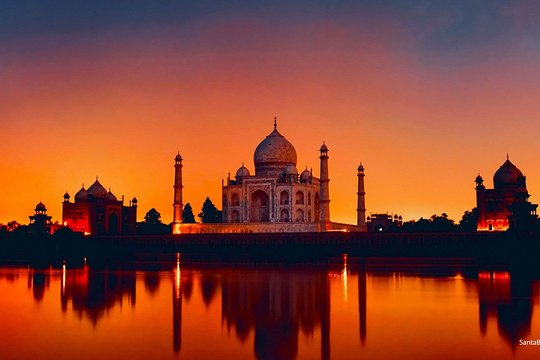 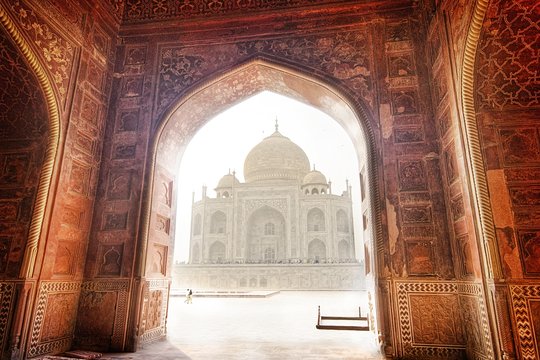 Stop At: Mehtab Bagh, Nagla Devjit Etmadpur, Agra India
Mehtab Bagh is a charbagh complex in Agra, North India. It lies north of the Taj Mahal complex and the Agra Fort on the opposite side of the Yamuna River, in the flood plains. The garden complex, square in shape, measures about 300 by 300 metres and is perfectly aligned with the Taj Mahal on the opposite bank.
Duration: 40 minutes

No meals included on this day.
Accommodation included: Overnight in Agra.(hotels depends on Package)

Stop At: Taj Mahal, Dharmapuri, Forest Colony, Tajganj, Agra 282001 India
The Taj Mahal is an ivory-white marble Islamic mausoleum on the south bank of the Yamuna river in the Indian city of Agra. It was commissioned in 1632 by the Mughal emperor Shah Jahan to house the tomb of his favourite wife, Mumtaz Mahal; it also houses the tomb of Shah Jahan himself.
Duration: 3 hours

Stop At: Agra Fort Rakabgani, Agra 282003 India
Agra Fort is a historical fort in the city of Agra in India. It was the main residence of the emperors of the Mughal Dynasty until 1638, when the capital was shifted from Agra to Delhi. Before capture by the British, the last Indian rulers to have occupied it were the Marathas.
Duration: 1 hour

Stop At: Tomb of Akbar the Great, 282007 India
Akbar's tomb is the tomb of the Mughal emperor Akbar. This tomb is an important Mughal architectural masterpiece. It was built in 1605–1613 by his son Jahangir and is situated in 119 acres of grounds in Sikandra, a sub of Agra, Uttar Pradesh, India
Duration: 1 hour

Meals included:
• Breakfast
No accommodation included on this day.
Show More
Important Information
Departure Point
Traveler pickup is offered
We pick up from Any location in Delhi

Write a review
Traveller rating
Traveller type
Time of year
Language
Selected filters
Alexandra wrote a review 9 Jan
1 contribution
Sunrise Sunset Taj Mahal tour
I came to India for some business in Gurgaon, I had only 2 days left so decided to see Taj Mahal before leave to back home. Thanks for the Aarav Travel- Abhishek for this wonderful overnight Taj Mahal trip. Driver Shispal came on time to pick me from Gurgaon and drove to Agra,…
Read more
Date of experience: September 2019
Helpful
Share
Vince wrote a review 6 Jan
1 contribution
Overnight Journey to Taj Mahal
Me and my wife have 02 days for holidays so we decided to see Taj Mahal & booked 02 days tour for Agra from Aarav Travel, I spoke directly to owner Mr. Abhishek he arranged all the things in just 24 hours prior the trip start and send the good private car for our trip, the…
Read more
Date of experience: November 2019
Helpful
Share
About the operator

vilhovile
10
India 5 Days Golden triangle tour with Tiger
We had a very pleasant trip with Pradeep in the golden triangle with ranthambore. We were the family of 2 Adults…
Read more

Daichich
21
India Golden triangle tour
We have been India for 3 days and visited all 3 major cities of India include Delhi Agra and Jaipur. Our tour…
Read more

safiyaarisa
10
India 5 Days trip
We organized our golden trip through the Aarav Travel with a few emails, it was sorted. Pradeep was our driver who…
Read more

seoyun4
10
5 Days Trip
This 5 days golden triangle India trip, Our driver kept us supplied with water and candy on our trips in his clean…
Read more

luliasct
10
Taj Mahal Tour
I had such a great time in India, I booked one day trip with express train. Driver picked us from the hotel at 7…
Read more

Charlottegrace48
10
Excitted Day
This review special for Shispal as we were 4 girls traveling first time in India, as we heard a lot about it but…
Read more 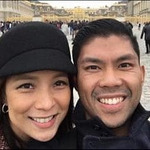 MajaAQN
Manila, Philippines
51
Thank you for unforgettable memories
Thank you the team for your great care. I had wonderful experience in India. And this was more than I ever dream…
Read more

Steveaustin78
10
Our 3 Days Golden Triangle Tour
Our very first day started from airport, our driver was really nice and he had a very clean car. He picked us from…
Read more

geneivajackson
10
5 Days India Trip
We took 5 days trip for friends of 4.Shispal very polite from the beginning, he was flexible and helpful, I will…
Read more

Websterstuart
10
The Day with Taj Mahal
Abhishek the tour manager, communicated with us long before the trip and advised us that because of the fog at…
Read more

Roykasch
10
Golden Triangle Tour
Well organized tour. The driver Pradeep came on time to pick us from Delhi airport till the whole journey he was…
Read more