“Exceeded Expectations”
dkI0XzIyX2owMA==
other travellers have booked this property 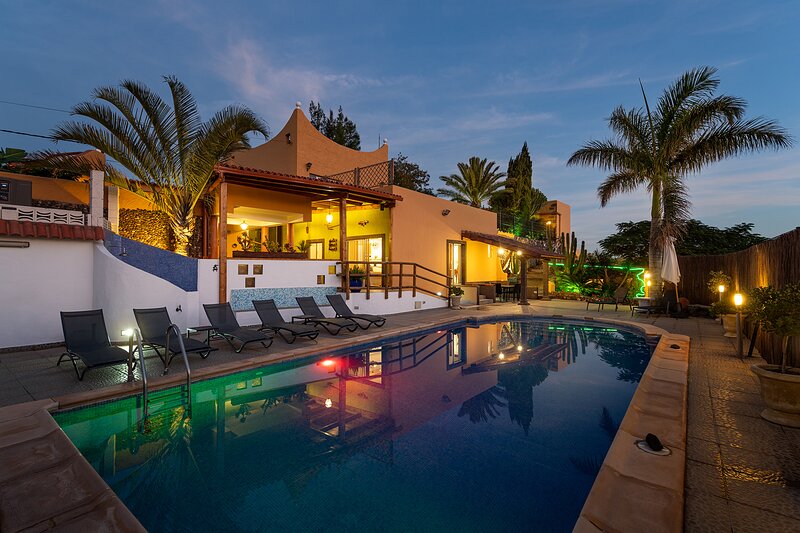 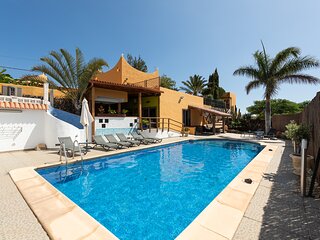 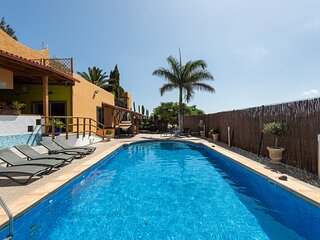 Excellent - based on 25 reviews
Write a Review

We chose Villa Atlantida partly because of its close proximity to the airport just a ten minute taxi ride costing about 15 Euro. Our group consisted of 3 couples and 2 babies. The villa, gardens and pool area are extremely well equipped and maintained to a very high standard including pool towels. The outside BBQ area is fantastic and we used it most evenings. The bedrooms are spacious and very clean and comfortable with towels provided and a hairdryer. There is a choice of social space, patio area, BBQ area, lounge and games room. 2 large, flat screen high tech TV’s and good internet access. Our choice was to self cater as we had 2 babies with us. The kitchen is very well equipped including a dishwasher with everything you need even various herbs, spices and cooking oil. Situated up a hill away from the town centre a car is very useful although taxis are easily available and not expensive. The village centre has 2 good supermarkets and a great butcher. The villa is terraced and built into the rock overlooking a most marvellous valley with beautiful night time views of the church. But what makes this beautiful holiday destination even better are the owners Pedro and Isabel . When we were booking we had a few questions and a wish list. 2 cots. 2 high chairs......blah blah blah.... Pedro answered quickly and provided everything that we needed nothing appeared to be too much trouble and he was very happy to oblige. Our group was travelling from 3 different destinations so our arrival was staggered but Pedro and Isobel were there to get us settled in with a warm welcome. The following day they popped by with a home baked cake and to make sure we were all comfortable. Lovely people! We would defiantly recommend this place for a relaxing, comfortable holiday destination away from the tourist hype.

Date of stay: May 2015
Liked best: Home from home
Liked least: Driving on the one track hillside road to the villa
Travelling group: Extended Family
Would you recommend this hotel to a friend?   Yes.
Recommended for:
Was this review helpful? Yes
This review is the subjective opinion of a TripAdvisor member and not of TripAdvisor LLC
I greatly appreciate your words of support for the work that Isabel and I try to do in the villa. But more still thank you for your presence and that of your family with your beautiful grandchildren.

We expect and hope that we can share other nice moments with you to return to our villa and so you enjoy both the villa and the island of Gran Canaria, which holds many charms.

Isabel and I will send many kisses and hugs to you and your lovely family.
This response is the subjective opinion of the management representative and not of TripAdvisor LLC
Problem with this review? Thank you. We appreciate your input.

2 helpful votes
“A beautiful villa, with welcoming owners.”
Reviewed 2 November 2014 for a stay in October 2014
2
people found this review helpful

My parents rented this villa for our family to have a holiday together in October. In total there were seven adults and two children (aged 2 and 5.)

The villa itself is beautiful and clean with plenty of space. Every couple was able to have their own bedroom, and my two kids were able to share a room next door to ours.

The kitchen is huge, with a table and chairs, as well as a television and two sofas. There is a fridge/freezer which has plenty of space. The kitchen also has a dishwasher, toaster, kettle, coffee maker, stove top, and a small oven/grill for cooking pizzas and fish fingers etc. You're not meant to drink the tap water, so we always had large bottles in the kitchen for drinking and for using when brushing our teeth (this might have been excessive but we weren't sure exactly how safe or unsafe the water was.) The owners, Pedro and Elizabeth had provided us with a large jug of water at the start, and a frozen pizza in the freezer in case we hadn't had any food, which we thought was very kind of them. We also found a variety of spices and seasonings, along with salt, pepper and sugar, and tea and coffee.

The main part of the house also has wi-fi.

The swimming pool was large, and clean, although a bit cold for most of us, however the owner has been researching ways to warm it up and is planning on having that sorted out soon. There is an outdoor shower, and a pool room with a sink, toilet and washing machine (no dryer.)

The outdoor BBQ area is lovely, and a great place for large groups to sit in the evening whilst cooking steaks or chicken on the BBQ. The table is enormous and the view of the nearby town of Aguimes is stunning, especially with the church lit up at night (my two year old son loved this.)

There were two bedrooms on the main level as you enter the property, one with en-suite and one without, each had one double bed. There is also a bathroom with shower just off the kitchen which can be used by whoever is in the room without the en-suite. The rest of the bedrooms are up a set of stairs which runs along the outside of the house, leading up to a stunning rooftop courtyard with a lovely little fountain, and lots of mature trees. Up there we had three bedrooms; the purple room, the yellow room, and the green room.

The green room was where we put our two children and barricaded the en-suite door so that the two year old didn't get up to any mischief. There was a double bed and a small single bed in the room.

The yellow room was a bit dark due to there not being many windows - only one small window way up high, but it had two double beds in it, and an en-suite bathroom with a shower. The room also had a wardrobe with hangers to put your clothes away.

The purple bedroom was lovely, it had two double beds, each in it's own "separate" room (There was only a door sized gap between the rooms, but no door that you could close to complete the separation - same with the bathroom!) The bathroom was huge and very nice, complete with a bathtub with a shower head, two sinks, a toilet and a bidet.

Also on the upper level there was a very large living room type area, with a very comfortable sofa, a table with a few chairs, a fireplace, and toy play area for kids.

Between the 9 of us, we had two rental cars which we picked up from the airport (only about 10 minutes away from the house) and we found that we had to drive most places because of the heat and the kids, although one day we did hike down the hillside into the valley below the house, and across into the town of Aguimes, which was lovely. For the most part we used the house as a base and traveled to various places on the island.

My only two somewhat negative notes about our stay were that a few of the nights we were woken very early due to dogs in the valley barking quite loudly, although this could not be helped by the owners, so we can't fault them on that, it's just worth noting for future guests who might not be very heavy sleepers - possibly keep some earplugs on hand!

The other thing that I feel I should mention is for those of you who have very young children, the house is right on the edge of a steep valley with some very dangerous drops on the other side of the fence. Most of the fencing is quite sturdy, but there is one area near the fruit trees and BBQ area, that just didn't seem safe enough and I had to keep a very close eye on my two year old son whenever he was wandering around that area.

Overall our experience was fantastic, and if we ever decide to visit Gran Canaria again, we would gladly stay at this villa.

Date of stay: October 2014
Liked best: The design of the house, and the views.
Liked least: The dogs in the valley.
Travelling group: Young Children
Would you recommend this hotel to a friend?   Yes.
Recommended for:
Was this review helpful? Yes
This review is the subjective opinion of a TripAdvisor member and not of TripAdvisor LLC
Problem with this review? Thank you. We appreciate your input.

Worcester, United Kingdom
Reviewed 13 April 2014 for a stay in March 2014
1
person found this review helpful
Date of stay: March 2014
Liked best: Space and location
Liked least: only one set of keys
Travelling group: Friends
Would you recommend this hotel to a friend?   Yes.
Recommended for:
Was this review helpful? Yes
This review is the subjective opinion of an individual traveller and not of TripAdvisor LLC nor of its partners.
Problem with this review? Thank you. We appreciate your input.

Date of stay: August 2020
Was this review helpful? Yes
This review is the subjective opinion of a TripAdvisor member and not of TripAdvisor LLC
Problem with this review? Thank you. We appreciate your input.

Date of stay: August 2019
Would you recommend this hotel to a friend?   Yes.
Was this review helpful? Yes
This review is the subjective opinion of a TripAdvisor member and not of TripAdvisor LLC
Problem with this review? Thank you. We appreciate your input.

Date of stay: October 2019
Was this review helpful? Yes
This review is the subjective opinion of a TripAdvisor member and not of TripAdvisor LLC
Problem with this review? Thank you. We appreciate your input.

Date of stay: October 2019
Was this review helpful? Yes
This review is the subjective opinion of a TripAdvisor member and not of TripAdvisor LLC
Problem with this review? Thank you. We appreciate your input.
Previous Next
1 2 3 4 5
Updating list...
Do you own a holiday rental? List it here.

Looking for a place to stay in Ingenio?
View all 18 holiday rentals