US$31
Free cancellation until 22/10/21
View deal
Hotels.comUS$31
Booking.comUS$32
PricelineUS$34
eDreamsUS$32
Orbitz.comUS$31
CheapTicketsUS$31
View all 14 deals
Prices are provided by our partners, and reflect nightly room rates, including all taxes and fees known to our partners. Please see our partners for more details.
Payments made by partners impact the order of prices displayed. Room types may vary.
GELLIOTT
Derby, United Kingdom
6166

Booked this because it was a great price and wanted to stay on the outskirts of Tokyo. I wasn't disappointed. Yes the rooms are very small and little room to store your luggage but I was aware of that when I booked it. The rooms were very clean, free wi-fi in the hotel reception area or you could connect for free in the rooms via LAN cable, free coffee available all morning, All staff were very friendly and polite and spoke very good English. The hotel is 1 stop from Tokyo on the blue JR Sobu line, its then about a 7 minute walk from the station if you exit via the left stairs of exit 5. Its in the business district. It was a little difficult to find but we were lucky enough that someone stopped to help us, once we were shown where it was there wan't a problem. If you're looking for somewhere cheap and cheerful to stay then this place is it. We stayed here for 3 nights in a double room.More

Show less
Room tip: I looked in several rooms and they all looked similar in size.
See all 609 reviews
Payments made by partners impact the order of prices displayed. Room types may vary.
Nearby Hotels 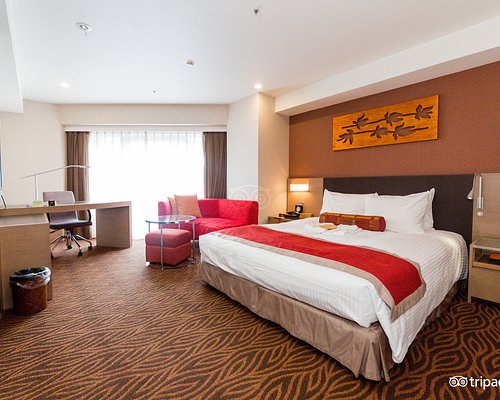 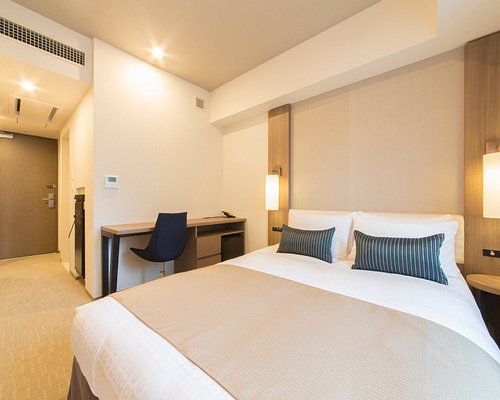 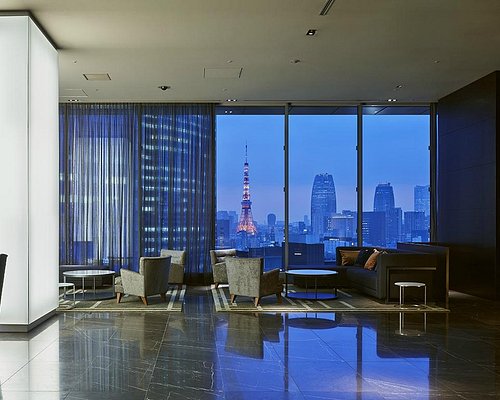 This was our first experience of Japanese hotels. First things first, we loved the mini (but deep) bath tub and hi-tech toilet seat. I have to mention these straight off as they added nicely to the experience! Our room was very small but we understand this to be common in tokyo. It had a tv and kettle and a decent wired Internet connection. A nice touch was that they gave us an umbrella to borrow when it was raining/snowing.

Next door is a 24 hour familymart store which was useful. Over the street is a nice coffee house (cafe veloce). The general location is ok. It's in a business district but close enough to walk to one of the main stations. Definitely look into getting a Japan rail pass before you go if you can as travel can be pricey.

Good price for Tokyo and perfect for what we needed - a cosy place to sleep after long days of sightseeing.

The mount fuji trip and a ride on the bullet train are a must do while in Japan.

This review is the subjective opinion of a Tripadvisor member and not of TripAdvisor LLC.
emik0
Kuala Lumpur, Malaysia
339
Reviewed 21 August 2012
If most of your time is outdoors than this place is great for you

Went there late March this year. Stayed 4 night. Superbly comfortable. Near to subways or metros, it has a convenience store next door, many cafes and restaurants around the corner. Room is small especially toilet but very clean. Provides body soap, shampoo in big bottles, no need to bring one. It was early spring, cold; so didn't use A/C. Old TV -still able to watch popular local drama and varieties. And i feel safe walking after midnight to go grab a drink. Will sure stay here again for next visit!

This review is the subjective opinion of a Tripadvisor member and not of TripAdvisor LLC.
1globetrotterSweden
Sweden
9259
Reviewed 12 August 2012
WHAT A GREAT HOTEL!!!!!!

A superb hotel in great location of Nihonbashi area. Close to a couple of metrostations and many many restaurants and cafés. Clean small roooms, great staff but only jap channels on the tv. Great prices!! Stayed here for 8 nights and enjoyed every minute of it. Will absolutely stay here again!!!

Price is hard to beat and the hotel is nice and clean. Transport options are superb as you have 3 metro stations nearby. Very easy connection to Narita airport when using Keisei Skyliner or a normal train. The only big problem is the AC or lack of it. The air in the rooms gets really stuffy, especially because the rooms are so tiny and you can't open the windows.

This review is the subjective opinion of a Tripadvisor member and not of TripAdvisor LLC.
Stephanie W
Melbourne
26
Reviewed 12 July 2012
Great choice if you don't intend on spending your days in the hotel.

Let me preface any negative comments by saying that, overall, this place was an excellent hotel to stay in - we were out and about for 12 hours each day so it really was just a place to crash for the other half of the day and it was well-suited for this.

However, from the reviews here I was expecting the desk staff to speak English fairly well and be very helpful for tourists. Our luggage was delayed two days by our airline and we desperately needed to buy essentials (underwear, toiletries etc), so my first question of the staff was where I could find such things at this time of night (about 9pm) but unfortunately they had no idea what I was asking so we felt rather lost and alienated, having never been to Japan before. Luckily the Lucky7 next door had a few things we needed. Also the hotel room had many essentials - toothbrush, toothpaste, razors, and you could get more things in the lobby - it's like they assume no one brings these things!

On our first night we were too nervous to go into any of the nearby restaurants as they all looked very exclusive, but we tried our luck at one place and it turned out one of the cooks spoke English very well and we ended up going back there every day of our trip because she treated us so well and we felt so welcomed there - it was great! If anyone staying at this hotel wants the name/address of that restaurant, let me know.

Anyway, the hotel rooms were tiny, obviously, however we survived, and my boyfriend and I are both quite tall. We're not used to staying in huge luxurious rooms though, so it was fine for us.

I did see a couple of cockroaches in our room however it didn't really bother me that much, and no-one else has mentioned having bugs in their room so it's probably not common.

It was just a short walk to the nearest subway station and from there you could get everywhere, we had no problem with the fact it wasn't on a 'main' line - it still took you easily to popular places like Asakusa, Ginza, Akihabara and Ueno easily (and the Narita Express stops at Ueno) and other places like Shibuya and Shinjuku on the other side of the city only took one change of train anyway.

Overall I would recommend this hotel, just don't assume all the desk staff can speak English well. It's not a problem that they don't, I just wish I hadn't gone in thinking that they could, because of tripadvisor reviews.

This review is the subjective opinion of a Tripadvisor member and not of TripAdvisor LLC.
View more reviews
PreviousNext
1…394041…