US$66
View deal
Free cancellation until 21/10/21
eDreamsUS$82
FindHotel
Agoda.comUS$92
View all 11 deals
Prices are provided by our partners, and reflect nightly room rates, including all taxes and fees known to our partners. Please see our partners for more details.
Payments made by partners impact the order of prices displayed. Room types may vary.
Alan R
Northumberland
5481

My wife and I had visited the south of Corfu about 17 years ago, had a bad time of it and were not in a hurry to return. We decided to give it another go for 2012, and chose the Coral. On arrival we were a little disappointed because we had booked a superior room and were hoping for a sea view, but got the pool view instead, we asked for a swap but were told the hotel was full.
Once we got past this early set back we really got to like the place, the staff were all very good, both friendly and efficient.
The restaurant overlooks the sea with great sunsets, and the hotel is well placed to walk into Roda or head in the other direction along the sea front to Archavi if you want a change from the pool. The pool area itself is compact with a nice little bar that also does snacks - and they are good.
The only thing that we didn't like was the bed linen, if you wanted it changed you had to ask, really it should have been two or three times a week, full stop.
We will definitely return to this hotel although we are booked for another resort next year, but 2014 looks very likely.More

Show less
Room tip: Book independently if you want a sea view.
See all 816 reviews
Payments made by partners impact the order of prices displayed. Room types may vary.
Nearby Hotels 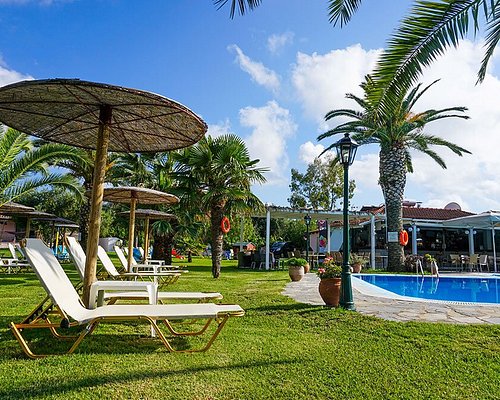 Taking safety measures
We compared the lowest prices from 10 websites

As my title states we did not stay in this hotel but my partner and I enjoyed cocktails here many nights of our 1 week stay in acharavi. We found the drinks to be reasonably priced and of a high quality (cocktails made to order not a bottled mixture). We also found the staff to be very friendly and they remembered us and we enjoyed banter with them

We also joined them for their Greek night. The food on the buffet was fresh, very well cooked and a wide variety with plenty available.

I can not comment on any other aspect of the hotel but we liked what we saw and this hotel contributed many hasp memories to our holiday.

This review is the subjective opinion of a Tripadvisor member and not of TripAdvisor LLC.
vimtoScotland
scotland
210
Reviewed 6 November 2012
My Daughters Wedding

My family have been going to the Coral Hotel on holiday for several years and have been made very welcome,by the Georgakis family.My daughter wanted to have her wedding reception at the Coral,so after the wedding ceremony in Sidari we came back to the hotel.We were all treated like Royalty,by every member of staff and the Georgakis family went the extra mile to make the day perfect,from the food to the decorations,on the tables,balloons,lighting etc.A truly memorable day.

Thank-you once again from The Sloss family.and Lynda and William (Smith)
We will return on the first flight from Glasgow 2013.

This review is the subjective opinion of a Tripadvisor member and not of TripAdvisor LLC.
steviejay
SCOTLAND
412
Reviewed 17 October 2012
Another great holiday...

Hi, We would like to say a BIG THANK YOU to the Georgakis family and all the staff for another amazing holiday and for their hospitallity and looking after us couldn't ask for better,we had a fantastic time can't wait to see you all again next year!!! lots of love to you all ♥ Janine & Stephen xxxx

This review is the subjective opinion of a Tripadvisor member and not of TripAdvisor LLC.
GeoffcN
Darlington, United Kingdom
8564
Reviewed 14 October 2012
Wonderful hotel with fantastic, welcoming staff

Booked this hotel based on Tripadvisor reviews and were absolutely delighted with it. Hotel is in an excellent condition, nice spacious rooms and very clean throughout. Nice pool area separating the main building (overlooking the sea) from the rear block. All staff were absolutely brilliant and couldn't have been more welcoming or helpful. Food was of a good standard with reasonable choice, the only exception being breakfast which was a bit predictable and uninteresting. Location within 5 minutes walk of the centre of Roda. Went at start of October - and the whole resort was just a bit too quiet for our liking with some places having already closed for the season. However the hotel and the wonderful staff made up for this with nothing being abtrouble to them.

Room tip: We booked a superior room in the main block and were overlooking the sea. Room was spacious and well appointed.
Ask GeoffcN about Coral Hotel
4  Thank GeoffcN

This review is the subjective opinion of a Tripadvisor member and not of TripAdvisor LLC.
Lala L
Manchester, United Kingdom
17
Reviewed 9 October 2012
coral hotel - no thank you!

- extra charge to use air-con, safe and fridge
- very poor breakfast, no fresh vegetables, every day the same- except one ingredients
- old furniture and not nice smell in the room
- cold showers - especially in the morning

and VERY RUDE OWNER!!!!!, who shows no interest in his clients and never help!

one positive aspect - beautiful view from the restaurant, but it's not enough!

Roda is nice place to stay, but You can find better hotel

This review is the subjective opinion of a Tripadvisor member and not of TripAdvisor LLC.
View more reviews
PreviousNext
1…103104105…
<script type='text/javascript' crossorigin='anonymous' async onerror='__scriptLoadError(this,true);' src='https://static.tacdn.com/assets/OkJwbt.f1cec36c.es5.js' da