stayed for four nights for a friends wedding, what an absolutely lovely place. The setting and the rooms are amazing. The staff were very friendly and helpful. Really nice breakfast as well. Would definitely recommend if you need a place to stay for a wedding party or any kind of celebration.

Room tip: All rooms lovely, family rooms are bigger but all a decent size
See all 134 reviews
Payments made by partners impact the order of prices displayed. Room types may vary.
Nearby Hotels

Expedia.com
View deal
Free cancellation
Reserve now, pay at stay
Booking.com
US$221
Priceline
US$138
Hotels.com
US$221
View all 16 deals from US$138
1,407 reviews
3.7 miles from Agroturismo Can Gall 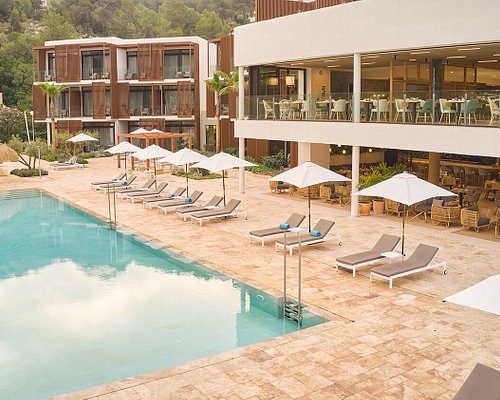 All Inclusive
Siau Ibiza Hotel
US$389

Expedia.com
View deal
Free cancellation
Pay up to 12X
Travelocity
US$93
Trip.com
US$85
Orbitz.com
US$93
View all 12 deals from US$85
917 reviews
3.7 miles from Agroturismo Can Gall

Expedia.com
View deal
Pay up to 12X
Booking.com
US$737
Destinia.com
US$691
Travelocity
US$748
View all 12 deals from US$691
96 reviews
4.2 miles from Agroturismo Can Gall
We compared the lowest prices from 12 websites
All Inclusive
Portinatx Beach Club Hotel
US$199

Expedia.com
View deal
Free cancellation
Pay up to 12X
Booking.com
US$183
Agoda.com
US$151
Priceline
US$198
View all 17 deals from US$151
1,676 reviews
4.1 miles from Agroturismo Can Gall
We compared the lowest prices from 17 websites
Breakfast included
Grupotel Oasis
US$143

What a place, beautiful surroundings, gardens kept so well, everywhere was so clean and the rooms where amazing, finished to such a high standard. Santi was always helpful and always attentive to his guests. the food was as good as the view beautiful.
If you have the chance go and see this fantastic Agroturismo.

Ask Antonio B about Agroturismo Can Gall
Thank Antonio B

This review is the subjective opinion of a Tripadvisor member and not of TripAdvisor LLC.
Jenna V
3122
Reviewed 26 June 2017 via mobile
PERFECT WEDDING VENUE, PERFECT HOLIDAY

Stop the search: you've found your wedding venue! Can Gall is without doubt the greatest place on earth for a wedding. We had a 3 day party here for 75 friends, with 22 of us staying in the beautiful hotel.
I can't say enough about the venue, the staff and Santi himself - who made everything possible. Everyone who came to our wedding has commented on how perfect the venue was, and we've all talked about revisiting Can Gall for a group holiday in years to come. It would be perfect for a large group of friends and family as well as a wedding party, and I totally agree with the other reviewers that a more beautiful and picturesque venue you will not find! Santi helped us find all our suppliers and liaised and coordinated them all on the day itself, he is the master of throwing a wedding celebration and it was slick and professional and everything we hoped it would be.
Definitely book Can Gall! (and invite me if you can!)

This review is the subjective opinion of a Tripadvisor member and not of TripAdvisor LLC.
scoobyslf
Yorkshire
3442
Reviewed 6 June 2017 via mobile
Amazing wedding venue at a price!!

Stayed here for three nights in the middle of May 2017 as part of a wedding party. Firstly let me agree with other reviews that this hotel is very exclusive, the rooms and grounds are presented to an amazingly high standard, yes its not cheap to stay here but you can see why.

Wifi is free and all 22 guests staying here agreed to an evening meal on the first day of arrival and a drinks package that was self service at the pool side bar, both these additional services were charged per person to the rooms. The food and wine served at the evening meal was excellent.

Breakfast was included with the price of the rooms, my first negative comment is that on the serving of the first breakfast the choice was excellent however by the third serving of breakfast on the check outday it was only average, with several food options previously served on the other two mornings not available!! I enquired as to why this was as the price for the room including breakfast was the same for the three nights so for the price we paid expected the same choice every morning, not so on the check out morning!! No explanation was offered.

The wedding day came and overall passed with fluency and with no initial problems, very professional for a party of 73, until midnight that was. A band had played until midnight and the free bar included in the wedding package had served between 9pm and Midnight. Once midnight came all the lights came on, music stopped and the bar staff said the night was over. Not consistent with the itinary given to guests, which had said the music and bar would be available until 2am!! A conversation was had and Santi agreed to open for another hour. However we felt this was begrudgingly. 1am came and we retired to our room.

The day after the wedding the atmosphere around the pool after breakfast was very muted with a sense of frustration, anger and disappointment, the bride and groom had been presented with a sizeable bill for "additional" charges for the wedding day, which had visibly upset and frustrated many of the guests, not what you are exactly wanting to experience after such a happy memorable day. We were not privy to the ongoing discussions about these "additional" charges so not in a position to say how it was resolved, however the atmosphere of all the guests had been seriously effected.

Checking out was smooth, agreed the items we had used from the mini bar in the room, along with the charges for the drink package and meal, settled the bill and left.
Please note:- there is no option to keep a room on later than departure time.

Overall had a good experience here, would I book it for a future event, probably not, simply because of the issue around the " additional charges" presented to the bride and groom which muted the celebrations the day after the wedding. Certainly didn't expect that at such an exclusive resort, a shame really.

This review is the subjective opinion of a Tripadvisor member and not of TripAdvisor LLC.
19DavidT89
Wokingham, United Kingdom
259
Reviewed 2 June 2017 via mobile
Wedding and bbq

Getting there felt odd, driving down a dusty road to reach this 'Paradise'...
We spent two days visiting the phenomenal resort at Can Gall.
The first day was for a wedding that I simply cannot put into words. It was the most beautiful, well crafted and well organised event in an idyllic setting. Magical.
The owner Santi went above and beyond to ensure not only the couple, but all guests, were catered for with amazing efficiency. He seemed to predict needs and requests before they happened which was astounding.

The second day we returned for a post wedding BBQ where once again the setting was perfect and the food even more so. Santi, once again, cooked up a storm of the most delicious meat from the BBQ that I could have asked for. His sangria accompanied it brilliantly. The relaxed nature of both events meant that the bar was self serve at our request and the trust, understanding and ability to accommodate the groups needs was incredible.
I could not recommend a visit to this hidden gem more highly.

This review is the subjective opinion of a Tripadvisor member and not of TripAdvisor LLC.
lordy24
Basingstoke, United Kingdom
59
Reviewed 2 June 2017 via mobile
Simply Perfect

My wife and I have just returned from Can Gall after getting married at this absolutely  stunning venue.

Where to start trying to write words to express not only how beautiful the venue is, but also all the staff that work there. Santi, who is the owner, could not have done more to make the 4 days the best of our lives. No request was too much for any of the staff to carry out and they all did so with a smile on their face.

We made the decision not to hire a wedding planner as the costings were too much. After speaking to Santi, he was adamant that we would not require one as his local knowledge and reputation on the island meant that everyone we used knew each other and the day ran perfectly. Santi was present throughout the day and did everything to ensure all the guests were well catered for.

We did not leave the venue for 4 days. We arrived on Mon and opted to have the welcome dinner package which was amazing.  Married on the Tuesday and then had Santi cook the best BBQ I have ever had on the Wednesday. We then chilled the whole Thursday and again, had dinner at the venue.

If anyone is looking for a venue in Ibiza to host a wedding then look no further.  You will not be disappointed.

This review is the subjective opinion of a Tripadvisor member and not of TripAdvisor LLC.
View more reviews
PreviousNext
1…345…