Returning home from our family holidays in Brittany, we stopped overnight at this castle in the middle of Normandy. My wife stayed at the castle some 20 years ago when it was a gastronomical restaurant and hotel. Since then the property was bought over and its orientation is now more towards student groups and families. It is somewhat simpler than what we expected, but we were not disappointed at all. The service and assistance of the bi lingual staff is excellent. Very helpful and caring. You can feel that they want to make you feel comfortable and enjoy your stay with them. The diner was very good and met more than our expectations. The breakfast table was simply the best we had from our whole holidays. The garden and surroundings, although simple, are very very nice. All in all we had a better than usual overnight stay in this hotel and we would like to thank the manager and the staff for making our stay very pleasant. We were wary of noise as the manager called us long before our arrival that there was going to be a large group (+-20) of teenagers staying in the Hotel, but we did not get any noise or disturbances. Ideal base for WW2 tourists as the theme of the hotel is about remembering the D-Day and the sacrifices of thousands of allied soldiers.More

Show less
Room tip: rooms in the annexe of the castle are quieter
See all 24 reviews
Payments made by partners impact the order of prices displayed. Room types may vary.
Nearby Hotels 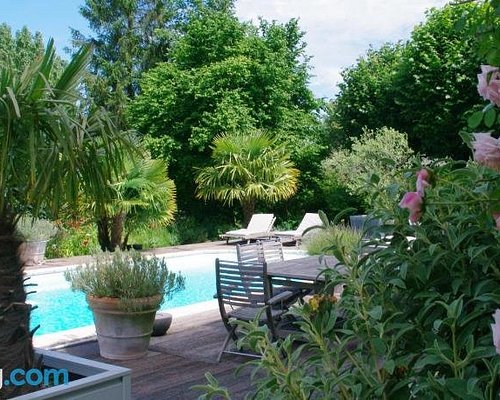 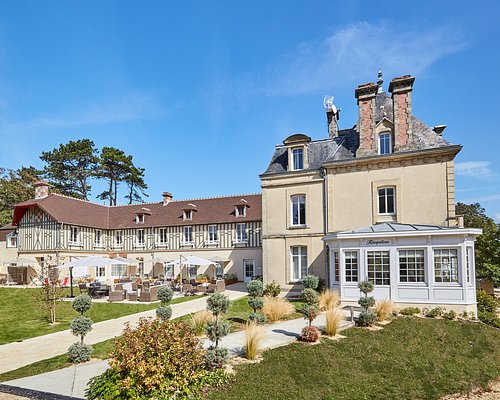 Les Villas d'Arromanches
US$113
Booking.com
View Deal
Free cancellation
Hotels.com
US$112
Agoda.com
US$113
eDreams
US$113
View all 12 deals from US$112
393 reviews
6.3 miles from Chateau du Baffy
We compared the lowest prices from 12 websites 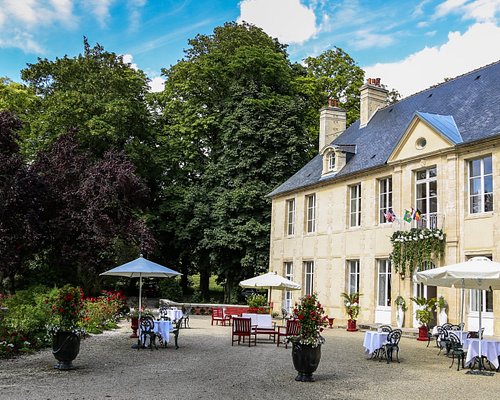 what a fantastic school trip we had staying at the Chateau du Baffy. The rooms were beautiful, all with ensuite. Clean and spacious. The food was delightful and the staff more than accommodating. Definitely would recommend.

This review is the subjective opinion of a TripAdvisor member and not of TripAdvisor LLC
A4397PNcarold
Trench, United Kingdom
1310
Reviewed 12 April 2018 via mobile
Ideal for school trips or as a base

I visited last week with 70 of our school children. Chateau du Baffy was perfect for this type of trip. A games room with a DVD player is perfect for evenings. The staff were very friendly and accommodating and the food was out of this world. The grounds to the chateau are amazing and a little walk in the morning before breakfast was great. The rooms are basic (no tv, no WiFi etc) but spacious and clean.

This review is the subjective opinion of a TripAdvisor member and not of TripAdvisor LLC
LDenyer
54
Reviewed 14 February 2018
Perfect for touring WW2 sites!

A beautiful French Chateau with an incredibly helpful and friendly manager, always on hand for a chat or to ask questions of. Fantastic rooms, clean and friendly staff and the lounge area wonderful in the evenings. Wonderful surroundings and very near to Caen and Bayeux for little jaunts.
All in all had a wonderful stay and shall go back again.
Thank you!

This review is the subjective opinion of a TripAdvisor member and not of TripAdvisor LLC
John W
5421
Reviewed 21 October 2017
As a venue for a school trip, really good

There are an awful lot of good things to say about the Chateau du Baffy. The location is delightful, the staff are welcoming and the food is ludicrously good for a place catering for school parties. We went with a party of 40 schoolgirls and the staff were helpful and tolerant of the noise throughout. The evening meal is a sit down affair, with the pupils waited on at table. Not the usual queue at a canteen which one might expect.

Down sides? Some of the rooms are a little cramped, and the showers on the second floor don't work well. With more than a couple in use on the first floor the ones on the second floor simply stop. There doesn't seem to be enough water pressure. I'm told that some of the ones on the first floor were good, but there was a lot of competition amongst the girls to try to find times when they could shower.

The Wifi is Iffy. Only works at all in one room, and then not well. When it's working at all, it can take two or three loads of a web page to get all the images, and often the router needs to be restarted. Obviously set up by someone keen on security but lacking the competence to do it properly, and not understanding that there's more to the internet than just the web. IMAP ports are blocked, meaning there's no access to e-mail other than via webmail. The router advertises itself and then the two Google DNS servers for DNS, but then frequently fails to respond to DNS requests. If you're of a technical bent, you can get better results by deleting the first entry and using just Google's DNS servers for your browsing. It's annoying when you find something set up so badly and you can't get in and fix it. For the most part, if you have a 4G phone you'll get better results using that rather than the chateau's Wifi. Phone reception is good.

If you're thinking of going as an independent traveller, be aware that you'll be sleeping in what is effectively a school dormitory. Set your expectations appropriately though and it's still very nice. For a school trip, it is excellent.

This review is the subjective opinion of a TripAdvisor member and not of TripAdvisor LLC
JM33333
Brighton, United Kingdom
1
Reviewed 13 October 2017
Wonderful

Just stayed at the Chateau du Baffy with 32 9-10 year old children. Hotel rooms were comfortable and the food was delicious. It is situated in a great location - near to many fantastic places to visit. We were looked after really well and nothing was too much trouble for the welcoming and friendly staff. Would love to come back next year.