Good for the price paid - Review of Karon Princess Hotel

Expedia.com
Hotels.com
Travelocity
View all 14 deals
Prices are provided by our partners, and reflect nightly room rates, including all taxes and fees known to our partners. Please see our partners for more details.
Payments made by partners impact the order of prices displayed. Room types may vary.
WorldRoamer59
London, United Kingdom
8466

Good for the price paid

Got the hotel at a very good rate through Sawadee so was not expecting too much, but seeing as only staying for 2 nights not too bothered. Had a good stay at this hotel. Stayed in the 2nd block away from reception (rm 2207) and was very happy with the room. Large, clean with a balcony. Two very comfortable twin beds (as requested), clean sheets. In-room safe and mini fridge which we used to store our own drinks with no problems. Good powerful shower. Lots of eateries very close to the hotel-come out of the hotel and turn left and you will find that the 1st street on the left, which you cannot miss is full of restaurants. We ate at a couple - chose the busiest and had good food. Reception staff always helpful whenever we asked for anything and we arrranged both airport pick-up and drop-off with reception, both trips without any problems. Across the road from the beach, as are all other hotels around here. Would stay again. Stayed for 2 nights, beginning August 2012.More

Show less
See all 321 reviews
Payments made by partners impact the order of prices displayed. Room types may vary.
Nearby Hotels 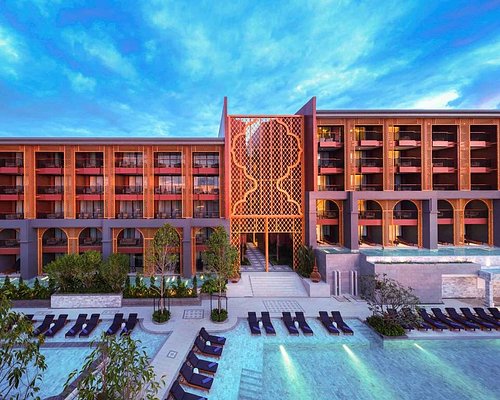 Hotels.com
View deal
eDreams
ZenHotels.com
US$63
Expedia.com
US$66
View all 17 deals from US$63
1,372 reviews
0.8 miles from Karon Princess Hotel Breakfast included
The Shore At Katathani
US$225

I didn't stay in the hotel so can't comment but we ate here and my advice is DO NOT! The service was absolutely shocking - they forgot my order and my husband had already eaten. When I complained it was like water off a ducks back. He also got really bad food poisoning from the so called 'fresh seafood'.

This review is the subjective opinion of a Tripadvisor member and not of TripAdvisor LLC.
Pelorojo13
Dallas, Texas
6696
Reviewed 7 August 2012
Did not pay much, did not expect much

For the price, I expected less but it is budget all of the way. Two single, rock hard beds, glasses that were never changed even when I took them down to reception (we were using them for drinks each night). I ended up washing them in the sink with the soap....

No where can you get ice but make it with the bottles of water left in the room - not very convenient. Just give me an ice machine for heaven's sake. I asked if I could get ice and I was told there was a charge.

The rat at the pool in the evening was interesting. I tried to tell the other people sitting there about the rat but they spoke Russian. We finally told them "Mickey Mouse" and explained in English/Russian they have seen many at the hotel....yikes.

Minus the rat, the pool is nice but not enough sun beds or umbrellas. the huge golf umbrella in the hotel for us non-sun lovers was a nice touch and I thought the breakfast was great. Cereal, fresh fruit, egg station, yogurt and noodles - plenty to fill your face with.

This hotel is ACROSS the road, as are almost all properties in Phuket. You will pay 200 Baht for two sun beds no matter where you go. Wasn't too impressed with Karon Beach but it was monsoon season and the garbage was blowing up on the beach and in the water. What a pity.

The kite flyers at this beach were cool though. This hotel is a good hike to many places but we managed to walk/tuk tuk everywhere and then get away from the madness. If you want budget, this place should do...just bring a cooler to store your ice!!!!

This review is the subjective opinion of a Tripadvisor member and not of TripAdvisor LLC.
andysb11
Stavanger, Norway
5338
Reviewed 2 August 2012
Its average

Its an average hotel in Karon. Right by the beach, and the rooms is really nice. The food in the restaurant isnt anything special, and the staff aint nothing at all.We had stayed for 5 min and the "bag man" asked us to buy something illegal, and that was not a good experience. If you would have a ok+ hotel in Karon, its ok to stay here. 1 min to the beach, and 3 min to city centre. Although id rather stay in Patong.

This review is the subjective opinion of a Tripadvisor member and not of TripAdvisor LLC.
Kailyn S
Toronto, Canada
58
Reviewed 22 July 2012
Horrible Service

Let me start by saying that the location of this hotel is great. It is right on the beach, and just outside the hustle and bustle of famous Patong. The rooms are huge and pretty well kept. However we experienced the worst service...

We had to depart our hotel for the airport very early, at 6 am. The day before we prebooked a taxi with the front desk and told them we would need to check out early. The next morning we got to the desk at about 5:50 am, and no one was at the desk. We had to get the women who were setting up breakfast in the restaurant to wake up the front desk attendant and the bell hop who were sleeping on the lobby couches. We then had to wait for the front desk man to check the mini bar in a room. We waited, and we he returned I was ready to pay but he kept saying he had to check the mini bar again for some reason... This time he sent somebody else (we didnt even touch a thing from the mini bar!) By this time, our taxi is waiting. By the time he allowed us to pay for the room and officially check out it was 6:20. We were very disappointed with the lack of friendliness and service at this hotel.

Don't eat at the restaurant either, as they have live music which is played so loudly you can't even think let alone have a conversation with anybody. The food is quite average.

The beach was also a let down. Although we were there in the low season so the sea was quite rough and we weren't allowed to swim because of rip tides. The beach was covered in garbage, everything from old shoes, shampoo bottles, to paint cans, syringes, and pill bottles. You can actually see the garbage washing up to the beach in the waves.

This review is the subjective opinion of a Tripadvisor member and not of TripAdvisor LLC.
Katja K
Western Finland, Finland
56
Reviewed 17 May 2012
Very nice :)

I travelled with my son to Karon Beach February 2011. Karon Princess Hotel was very nice: room was big and it was cleaned well every day. Cleaner even borught us flowers to room. We got every day fresh drinking water to room as well and filled minibar. Tea, coffee and cocoa was included to price.

Next to road was beach and location was pretty good. Breakfast was wonderful and there was lots of alternatives.

Staff was friendly and we enjoyed a lot staying here. Only one minus thing was that pools were dirty. Kids pool smelled like dog food...I don´t even want to quess what was in the water.

Anyway, I would recommend this hotel to everyone!