Our room was cramped, dingy and very depressing. Plastic cups were available to make tea and coffee but these had been bleached and not rinsed properly and the drinks from them went straight down the sink which promptly blocked up. I had also popped some sweets by my bed and within seconds they were covered in ants.

My husband asked to be moved and they found us another room with the promise that they would sort us out in the morning. There was a festival on and the loud music went on until 1 am and our room literally shook ( although this was not hotel's fault). The bed was hard and we did not sleep.

We had by now decided we needed to move and quick. My husband spoke to the manager and to be fair he did say that if we could wait until 12 noon he would show us a more superior room and would put something on the bed to make it softer. However he did say all rooms were of the same layout. There was no privacy at all and by this time we had sampled their idea of breakfast, which left a lot to be desired. I ended up with a freezing cold egg and bread yuk!

The Manager to be fair did try and accommodate us but by now we just wanted out and very quickly found another hotel more to our suiting.

If you are young and not too fussy then this hotel would be ok for you but if you are middle age and like a few comforts then forget this place. Location just was not worth it.More

Show less
Room tip: Don't think there are any judging by the three rooms we paid for
See all 705 reviews
Payments made by partners impact the order of prices displayed. Room types may vary.
Nearby Hotels 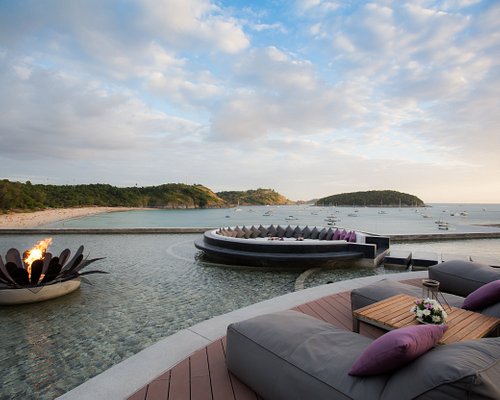 Expedia.com
View deal
Free cancellation
Reserve now, pay at stay
Hotels.com
US$18
Agoda.com
US$14
Priceline
US$16
View all 13 deals from US$14
117 reviews
1.1 miles from All Seasons Naiharn Phuket
We compared the lowest prices from 13 websites
Top Rated
Sponsored
Naiharn Beach Resort
US$32

Travelocity
View deal
Orbitz.com
Trip.com
US$47
Expedia.com
US$50
View all 16 deals from US$47
10 reviews
0.5 miles from All Seasons Naiharn Phuket

Hotels.com
View deal
eDreams
Agoda.com
US$32
Booking.com
US$39
View all 13 deals from US$32
13 reviews
0.1 miles from All Seasons Naiharn Phuket
We compared the lowest prices from 13 websites
Nairock On The Rock Resort
US$17

My husband, daughter, three-year-old grandson and I arrived at this hotel yesterday. We had booked two rooms for four nights and we were looking forward to a relaxing stay. We only managed to stomach three hours before checking out and demanding a refund of 6 nights.

What a dump. After check in we were taken to our rooms down a steep hill into hell. A stench from drains running past the rabbit warren like set up of hotel rooms. Once in our disappointing old and shabby room we tried to remain positive and put on the air conditioner and prepare our little grandson for an afternoon nap after our long drive from Ranong. Both aircons were not working even though the setting was on 15 degrees??? So, management said they would send down the engineers to adjust/fix. Hey, maybe the engineers could have a look at the stinking drainage system while they are at it? It was at about this time I decided to look at the pillows and to remove the pillow cases. Shock, horror: dirty, yellow and stained.

We decided to leave the hotel while they repaired the aircons and go look for other accomodation. We easily found two rooms very clean with working aircon.

We returned to the hotel and asked for a refund of six nights, as we had pre-paid, and we would pay for two nights. We ended up speaking with the hotel manager and he assured me that there was a new budget for pillows and that all pillows were to be replaced in the near future........we gave him our opinion that the hotel was overpriced and run down and a big disappointment. This opinion was, I believe, fair and based on our many years of traveling as a family to Thailand and always having experienced good value.

Our opinion and experience is, of course, subjective but I would advise travelers to bring mosquito repellant because the place was buzzing!

This review is the subjective opinion of a Tripadvisor member and not of TripAdvisor LLC.
Benny J
Tel Aviv
3
Reviewed 23 January 2013
great location, good hotel

Nice staff, very helpful, as is common in this great country. The hotel is a bit formal but that is a matter of taste. We generally tried to pick more down to earth places to stay. But the superior room was very good, the bed comfortable, and the path via gardens was very pleasent. The beach is fantastic, busy but not too much and night swims are very possible in the calm waters. The market is entertaining and has many bargains so with shopping and beach, we can definately recommend

This review is the subjective opinion of a Tripadvisor member and not of TripAdvisor LLC.
VinM_9
Ujjain, India
19057
Reviewed 19 January 2013
A good place to relax

Its a good place just opposit to the Naiharn Beach, a very calm and quite location.. The staff is help ful too. If you want a quite vacation this is the place to be. It is some 45 km from the Airport and at the southern most end of the Phuket Island. The area normally is not calm and quite and not many tourist visits this beach. If you are using public transport than avoid travelling in night as there are very rare chances of getting a transport upto the hotel.

This review is the subjective opinion of a Tripadvisor member and not of TripAdvisor LLC.
Digistephen
Queensland
54
Reviewed 7 January 2013
Cheap resort at a great location

This Resort is located at one of the best beaches on Phuket. However the resort itself is cheap and a little nasty.
Pros: room was clean and bed comfortable and staff friendly and helpful. Issues were dealt with promptly and with minimum of asking. Check in was short and efficient. Markets and beach , resturants are literally 50m from the hotel.
Cons: Constant smell of sewage near our room. Breakfast buffet choices were lacking somewhat, with fruit being not very ripe and limited. If you want bacon you have to ask the chef and he serves you what he thinks you require. Air conditioning in room was noisy and barely able to bring the temp of the room down even after some time. Room was dated in decor and looked as if it was a cheap motel room. Tea\Coffee facilities in room were old and not plentiful. Mnii bar non existent even though it had a menu. No hand towels and only 2 old pillows on the king bed. Television was old and reception poor. Minimal soap and shampoo and conditioner in bathroom. Toilet blocked on us on one occasion. Wi fi was hopeless and not free, had to log in and out each time it was used as you paid by the hour.
Overall impression is the this is a cheap resort that trades on its location but charges prices beyond its value. Will we stay next time? probably not.

Room tip: Make sure you are far from a sewage inspection manhole
Ask Digistephen about All Seasons Naiharn Phuket
4  Thank Digistephen

This review is the subjective opinion of a Tripadvisor member and not of TripAdvisor LLC.
Gar2010
Shenzhen, China
56
Reviewed 4 January 2013
All Seasons Phuket: Mediocre and Expensive

We spent 5 days over the 2012/2013 Christmas period at the All Seasons hotel and whilst I have no particular beef with the staff, who were generally helpful, we felt that the price charged for mediocre accommodation was well out of proportion to the overall standard on offer. The pool remained dirty for most of the period, the food was bland the childrens' playroom unattended and trashed most of the time. The gym is a gym in name only, don't expect anything and you will not be disappointed. Our accommodation was surrounded by smokers' - I think All Seasons could sort out their apartments into non-smoking areas quite easily our room was often tainted with cigarrette smoke which, given we have a child, was not something we enjoyed. Live and let live but at least give us a choice! Beware that you need to leave a deposit when you arrive (presumably because some guests leg it with the towels!) You might wish to bear this in mind as well as it's a generally homogenous package holiday style experience you will have - one you could have in Spain or Greece, anywhere really. There is little evidence of Thai culture left and the 'quiet' beach opposite is normally packed full of tanning tourists until around six in the evening. 'You pays your money and takes your choice' as the saying goes but I would neither return nor recommend this resort and hotel, it's bland, overpriced and focussed on maximising profit at the expense of paying guests experiences'.

Room tip: Stay away from the pool area unless you like techno music played from the morning until seven at night. A superior room can be anywhere and does not mean you will get a 'seaview'.
Ask Gar2010 about All Seasons Naiharn Phuket
Thank Gar2010

This review is the subjective opinion of a Tripadvisor member and not of TripAdvisor LLC.
View more reviews
PreviousNext
1…212223…
<script type='te