US$43
View deal
Free cancellation until 16/12/21
Hotels.comUS$56
PricelineUS$89
eDreamsUS$121
View all 14 deals
Prices are provided by our partners, and reflect nightly room rates, including all taxes and fees known to our partners. Please see our partners for more details.
Payments made by partners impact the order of prices displayed. Room types may vary.
katherinecw
Hong Kong, China
229

Ladies floor highly recommended for female travellers (men strictly not allowed). Floor is quiet and room is spacious (relatively speaking for hotels in Japan), and stocked with amenities such as facial cleanser and masks (DHC brand). There is even a massage machine on the sofa, and a face steamer. Quite impressed!

Superb location with convenient stores and so many restaurants nearby - there's even a Tommy Bahama (bar included!) right on ground level. Ginza station is only a 4 minute walk away.

Travelling from Narita airport (bus stop no. 2 to Ginza) is one hour to the heart of Ginza, then an 8 minute walk to the hotel (costs 1000 yen). Another option is to take the airport shuttle for Courtyard Marriott Ginza which is only one block from Gracery Hotel but will cost more (3100 yen).More

Show less
Trip type: Travelled with friends
See all 600 reviews
Payments made by partners impact the order of prices displayed. Room types may vary.
Nearby Hotels 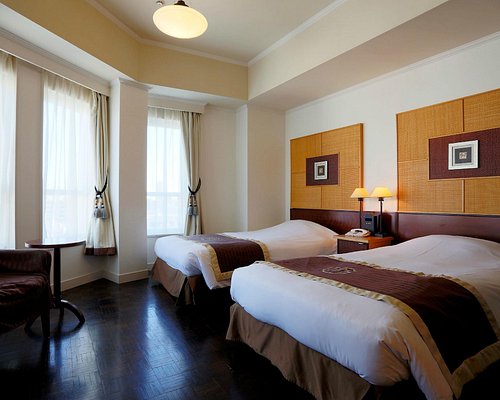 Hotels.com
View deal
eDreams
Booking.com
US$79
Expedia.com
US$80
View all 17 deals from US$79
662 reviews
0.2 miles from Hotel Gracery Ginza

Expedia.com
View deal
Free cancellation
Pay up to 12X
Booking.com
US$68
FindHotel
US$43
Hotels.com
US$55
View all 16 deals from US$43
38 reviews
0.2 miles from Hotel Gracery Ginza

The location of this hotel is spot-on. Whether you look for food or some shopping, all is there.
The rooms are quite tiny though. But the good news is that the room comes fully equipped: modern toilet, bathtub, hairdryer, fridge, and many other small electronics that I can't even say what is their purpose.

I would give a 4/5 for solo travel, but the room was really quite tiny for two.

This review is the subjective opinion of a Tripadvisor member and not of TripAdvisor LLC.
drsheryl
Toronto, Canada
8688
Reviewed 4 August 2016
A solid 3-1/2 stars

Reading the reviews here on tripadvisor, I knew what to expect and most reviews were spot on. The hotel is walkable from the Tokyo Station --which is where the Aeroport Limoussine Bus drops you off and many trains and subways stop here)approximately 1/2hour walk). The hotel is very close to many other subway stops (ie. Ginza, Higashi-Ginza, Shimbashi) but I was afraid of using the subways and wanted something close to the action. The hotel is right off one of the main streets in the Ginza--right around the corner from Zara and next to Tommy Bahamas.I reserved a semi-double room with a semi-double bed on a high floor and renovated. I can't comment on if the furnishings were renovated--they were utilitarian and served my needs, but make no mistake, this is not the Imperial Palace or the Four Seasons--where I would much rather stay!! The room was advertised as 15msqband it was tight but do-able, BUT I am one person!!! This is my first time in Japan and according to others, small rooms are the norm in Japan. But like I alluded to. I didn't want to pay $600-700 per night so you get what you pay for. There was a nice Sony Acquos tv in the room--only CNN in English, but I understand that this is not an English speaking country so I was grateful for something to watch. The room was quiet and the air conditioner was quiet and efficient. I didn't get the breakfast so I can't comment on it. There is all day coffee and ice water available in the lobby and it is great!! Overall, I would stay here again--I suppose it is equivalent to a Holiday Inn un the USA/Canada--not a Westin or Four Seasons or Fairmont. If you need more space, they apparently have 22m rooms but when I looked online, there were none available with a large bed. I don't know if I would pay the extra for the high floor again nor the renovated room upcharge. There was a small window and no view, Bathroom was small but nice--and I love the toilets with the bidet attached. North America could learn thing or two from e Japanese.

This review is the subjective opinion of a Tripadvisor member and not of TripAdvisor LLC.
frankt488
Arlington, Virginia
6133
Reviewed 30 June 2016 via mobile
Great hotel and location.

Three night stay. Superb staff, room and breakfast buffet. Numerous public transportation options. Japan Rail stations, several subway stations/lines and bus stop within easy walking distance. Not flexible on check in or out times. Will store bags if you arrive early. Will charge an hourly rate if you want to check out late.

This review is the subjective opinion of a Tripadvisor member and not of TripAdvisor LLC.
SingaporeBizTravel
Singapore, Singapore
9275
Reviewed 29 May 2016
Small but Perfectly Formed

An excellent location for first-time visitors to Tokyo is the Hotel Gracery Ginza, a short walk from the Nairita bus stop at Ginza Station (take this bus from the airport), the hotel rooms are tiny but very well thought out with everything where it needs to be. My room had a massage cushion, handphone charger by the bed, fridge, trouser press and everything else I could think of. There was a shower over the bath (bath salts included).
Staff are friendly but don't expect fluent English. There is a US$ bill changing machine in reception too, so I recommend taking a few dollar bills with you as Japan tends to be a cash country rather than a credit card one. And because the reception is on the third floor, after checking in you tend to go from the street to your rooms in the lift without passing reception at all, so you miss out on the opportunity to get to know the staff.
Just a small point - the restaurant is open for breakfast only, not dinner. And you don't need to buy breakfast there as you are in the centre of Ginza with lots of options to eat outside.

This review is the subjective opinion of a Tripadvisor member and not of TripAdvisor LLC.
RitzyCupcake
Perth, Australia
7471
Reviewed 22 May 2016
Small but nice

My husband and I stayed there for a few nights. The room was small however this is typical with Japanese hotels. The bathroom was nice and our room was cleaned daily. The magnetic "please make up room" and "do not disturb" signs were a convenient touch. Buffet breakfast was good for around $15 per person.

They held onto our bags after checkout which was lovely and confirmed our airport transfer with us. Although speaking basic Japanese helped us there as English was not understood very well by the staff. Subways within walking distance and Ginza is a great location with lots of flagship stores of your favourite brands.

This review is the subjective opinion of a Tripadvisor member and not of TripAdvisor LLC.
View more reviews
PreviousNext
1…151617…