US$52
View deal
Free cancellation until 24/10/21
Hotels.comUS$66
PricelineUS$61
CheapTicketsUS$66
View all 16 deals
Prices are provided by our partners, and reflect nightly room rates, including all taxes and fees known to our partners. Please see our partners for more details.
Payments made by partners impact the order of prices displayed. Room types may vary.
friendofjojo
Palo Alto, California
16180

Our double room was way too small to comfortably accomodate myself and my 6.5 ft (2 meters) tall friend. There was no space to move and for a four star hotel, I expect to at least be able to walk around in a tight circle in the room but you couldn't even do that.
Service was okay though not overtly friendly as you'd expect in Japan. Room was clean. Wifi was decent. Lots of outlets.
Location is in kind of a not so nice area off of the Red Light area of Shinjuku. Wouldn't recommend to families and not the most interesting area anyways.

See all 2,007 reviews
Payments made by partners impact the order of prices displayed. Room types may vary.
Nearby Hotels 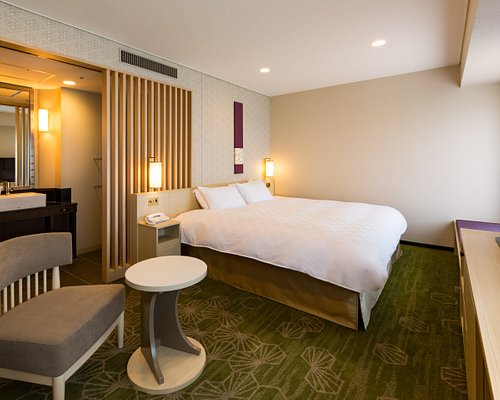 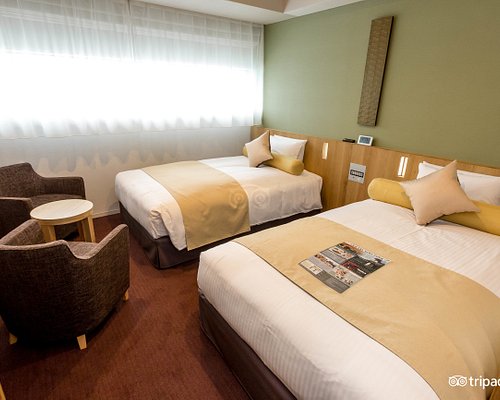 Hotels.com
View deal
Expedia.com
US$94
FindHotel
US$66
Booking.com
US$94
View all 18 deals from US$66
2,298 reviews
0.2 miles from Shinjuku Granbell Hotel
We compared the lowest prices from 18 websites
Shinjuku Kuyakushomae Capsule Hotel

Hotels.com
View deal
Expedia.com
US$43
FindHotel
US$32
Priceline
View all 13 deals from US$32
463 reviews
0.2 miles from Shinjuku Granbell Hotel
We compared the lowest prices from 13 websites
E Hotel Higashi Shinjuku

Hotels.com
View deal
Expedia.com
CheapTickets
US$48
Booking.com
US$57
View all 14 deals from US$48
990 reviews
0.1 miles from Shinjuku Granbell Hotel

Hotels.com
View deal
Expedia.com
US$41
FindHotel
US$38
Booking.com
US$48
View all 12 deals from US$38
52 reviews
0.1 miles from Shinjuku Granbell Hotel
We compared the lowest prices from 12 websites
Premier Hotel -CABIN- Shinjuku

Hotels.com
View deal
Expedia.com
US$45
FindHotel
US$36
Priceline
US$46
View all 14 deals from US$36
200 reviews
0.2 miles from Shinjuku Granbell Hotel

Hotels.com
View deal
Expedia.com
FindHotel
US$51
Booking.com
US$95
View all 15 deals from US$51
17 reviews
0.2 miles from Shinjuku Granbell Hotel
We compared the lowest prices from 15 websites
Hotel Livemax Shinjuku Kabukicho

This hotel is in a great location. It couldn't really have been better value for money on that front. You're right in the thick of it, and only a short walk from the Shinjuku chaos and fun.

Echoing the other reviews here, the rooms are teeny tiny. Good luck opening a large suitcase anywhere other than on the bed. Bed isn't massive either, but sufficient for a couple. All the amenities you'd expect to find; safe, hanging space, fridge, bottled water, etc.

Bathroom was fine, but also small. Amusingly, provided shower gel, shampoo etc had Lorem Ipsum all over the bottle. Would love to know how that happened.

Umbrellas were available to borrow from the lobby, which was handy as we had a spot of rain. Plenty of leaflets and information for tourists.

Breakfast was fine, nothing special but not a rip off either.

Lots of people have mentioned the customer service. It seemed fine to me, but we didn't really need any help. Your mileage may vary. They mentioned construction ongoing until November, but we didn't hear anything.

Overall, a pleasant stay on a great area, and very good price considering where it is.

Trip type: Travelled as a couple
Ask Ben B about Shinjuku Granbell Hotel
Thank Ben B

This review is the subjective opinion of a Tripadvisor member and not of TripAdvisor LLC.
Cameron B
Seattle, Washington
103
Reviewed 1 September 2016
Clean, Modern, Good Location

Clean, modern property in a good location. We paid an affordable price for the Luxury Designer Double / Mature room. It was quite nice. These rooms also came with access to a lounge on the 13th floor. The lounge was small and quaint, but offered free coffee and snacks during the day and free white or red wine during the evenings. It made for a good meeting place for our group. WiFi was complimentary.

Ask Cameron B about Shinjuku Granbell Hotel
3  Thank Cameron B

This review is the subjective opinion of a Tripadvisor member and not of TripAdvisor LLC.
Nadica S
London, United Kingdom
5013
Reviewed 31 August 2016
In the heart of it all

This hotel is right in the heart of Shinjuku, easy to walk about to all the bars and shops and easy to get to the metro. The hotel itself was very nice, modern with decent sized rooms. Not the best service in the world but helpful enough. The roof terrace bar was very nice.

This review is the subjective opinion of a Tripadvisor member and not of TripAdvisor LLC.
arthure18
Pasadena, California
1310
Reviewed 31 August 2016
Convenient and new, but lots of problems and POOR CUSTOMER SERVICE

OK, I want to be REALLY fair here, because I use TripAdvisor all the time and rely on these reviews myself. I'm not just bashing this hotel but want to give it an honest review. Besides, the hotel had cards on the counter asking guests to review the hotel on Tripadvisor.

The hotel is SUPER clean and pretty nice—it’s minimalist modern decor and is really clean.

The breakfast, which was included, is decent. About what you can expect from an included breakfast :) There are some oddities (like eggs with hard yolk and soft whites, and undercooked bacon) but that is to be expected in a foreign country with different culinary tastes. We liked the breakfast.

The location is central to Shinjuku, so if you are looking for over the top craziness, then the location is perfect. It is within walking distance of a metro station and about 8 minutes from the Shinjuku Train Station. One note about the reviews that talk about "love" hotels. Someone else said it and I agree, it's not what you think. This is not a red light district by any means. These are hotels that rent by the hour or night for young Japanese couples, and it’s pretty normal for the area. Not an issue at all—all part of the Shinjuku experience.

Also, the rooftop bar is nice for a late night drinking it’s open very late so it’s a great place to unwind after a long day.

We had booked 2 double rooms for my family of 4 (my kids are 18 and 23). My nephew travelled with us so we knew we had to add a room or upgrade when we got there. The rooms are TINY by even Japanese standards. The double bed is up against a wall so it’s impossible for 2 adults to sleep in it. We ended up getting a double/double for my son and nephew and my daughter stayed in the original double we had booked. Me and my wife had to upgrade to a queen. In all three rooms, the space around the bed is about a foot and a half on the side and foot of the bed (remember the other 2 sides are against a wall). The bathroom is OK, but not great. The room is clean, so that's a plus.

THE SERVICE IS TERRIBLE. The Japanese are generally extremely courteous and helpful. The service at this hotel is bad on WESTERN standards. The desk staff is uninformed and unhelpful. Anything you ask for, the answer is no. They were very unhelpful arranging or recommending transportation from the airport to the hotel (I contacted them by email). They also knew nothing about any site seeing or places of interest, simply referring to the rack of tour brochures when asked anything. They wouldn't even get us taxis on the last day when we were leaving or book the bus from the Tokyo terminal to the airport. The day before we left, we ended up having to walk 8 minutes each way in pouring rain (typhoon) to reserve the bus.

I also observed, while sitting in the lobby at the end of a day, an argument between a guest and the manager. Apparently, the guest was complaining that a woman had used a key to enter this his room (and she was available to confirm it) but the manager was having none of it. The very loud conversation lasted almost 30 minutes. A couple of thoughts: The manager should have taken this man to a private room so this argument would not be on display for all to see. Also, the manager has to think big picture here. let the guy checkout and go to another hotel, like he wanted, and forgo the 2 nights he would have collected vs risking a bad review and annoying at least 15 other guests who are sitting around watching and listening to this. So unprofessional.

One thing that was not that bad, but was still very annoying was the lobby coffee bar hours. They open at 10AM, so if you are gathering in the lobby to go out for the day any time before that (which was every day) you are out of luck. It seems a bar serving cappuccino etc. should be open early in the morning. Like I said, not terrible, but strange.

Overall, not a great experience. I would highly recommend you find another option for a hotel.

Hello, arthure18 .
Thank you very much for taking your time to provide insightful feedback.

I am very sorry to learn that our overall service was far below your expectation. I have shared your opinion with our staff and manager to improve our performance. We are making more effort to comprehend needed information and help guests flexibly have a pleasant stay.

Hope to have another chance to welcome you back sometime.

Report response as inappropriateThank you. We appreciate your input.
This response is the subjective opinion of the management representative and not of TripAdvisor LLC
Stacey G
Brooklyn, New York, United States
1115
Reviewed 27 August 2016 via mobile
Terrible customer service

Before our trip to Japan, all we ever heard was how amazing the people are, how nice. I'm sad to say I cannot say that about the people working at the Shinjuku Granbell Hotel, who have no understanding of hospitality or good customer service. We're in the middle of our three-night stay, and this morning, I stopped at the front desk to see if they could make a dinner reservation for us at a restaurant in Kyoto that only takes bookings by phone. I was told that they couldn't make a reservation for us if it was for a date we'd no longer be staying at the Granbell. Kidding me? She was not. Unapologetic and unkind is how the Shinjuki Granbell staff are. At $300+ a night, I highly recommend you put your money elsewhere, because this hotel is not okay.

We would like to thank you for taking your valuable time in sharing your feedback.

We are truly sorry that you had such a disappointing visit because of the poor customer service you received. This is obviously not the experience we want you to have at our hotel. Your comments are gratefully received and will be shared with our staffs. It means a lot to our hotel when our guests make the effort to share their satisfaction and suggestions. We shall definitely be looking into the suggestions which you have made as we want all out guests to enjoy their stay in the most comfortable manner possible.

Thank you very much giving us the opportunity to fix something that is wrong.

Report response as inappropriateThank you. We appreciate your input.
This response is the subjective opinion of the management representative and not of TripAdvisor LLC
View more reviews
PreviousNext
1…123124125…