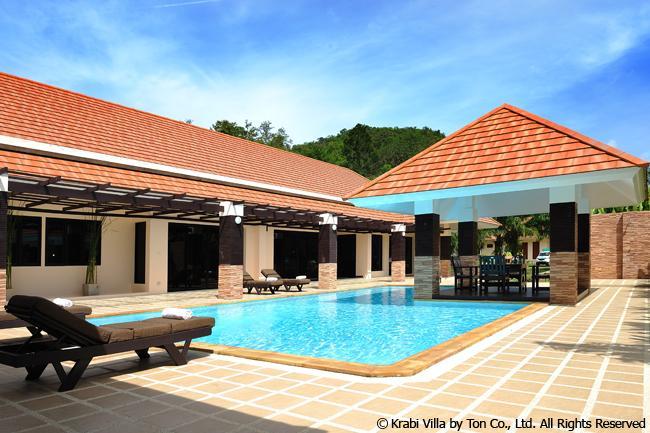 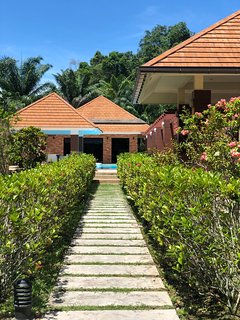 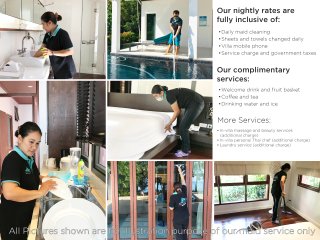 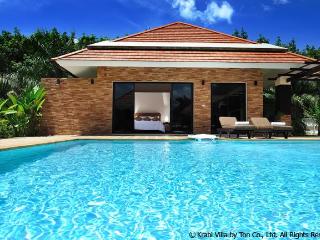 Excellent - based on 11 reviews
Write a Review

Stayed at Baan Santi with my family in november 2011. The villa is located aprox. 7 min from Ao Nang beach. Since you have unlimited tuk tuk transportation service within Ao Nang form 09.00 - 22.00 there is no problem. The reason that we choosed the Baan Santi was becouse of the 3 large bedrooms, which is around 40 sf. each.

We also had catering services with personal Thai chef, or 5-6 Thai chefs. It was amazing. We were 6 ppl. and ordered 9 starters and 7 main course. Payed 350 bath each + the cost of the food which was like nothing. 1300 bath I think

Date of stay: November 2011
Travelling group: Other
Your age range 25-34
Would you recommend this hotel to a friend?   Yes.
Was this review helpful? Yes
This review is the subjective opinion of a Tripadvisor member and not of TripAdvisor LLC.
Problem with this review? Thank you. We appreciate your input.

Beautiful large villa located on the outskirt of Krabi, transport is needed if you wish to visit local attractions. We hired 3 scoooters which were adequate and also had the use of transport as provided by Ton Villas. The swimming pool was a very nice feature of the property. We stayed in the sister villa last year ( Baan Zoe) which had a washing machine, same facility was not available in Saanti which was a shame. The owner's staff live within the Villa complex along with staff from the neighbour villa, the only downside is that you do not get privacy as folks seem to wandering around all day, seperation between the two villas is limited to a hedge. On a return visit would opt for Baan Zoe rather than Baan Saanti if available

Date of stay: July 2011
Liked best: Spacious Accommodation
Liked least: Lack of privacy
Travelling group: Family with Teenagers
Would you recommend this hotel to a friend?   Yes.
Recommended for:
Was this review helpful? Yes
This review is the subjective opinion of a Tripadvisor member and not of TripAdvisor LLC.
Problem with this review? Thank you. We appreciate your input.

I stayed at Baan Santi with my fiance and two other couples from April 11-15. It was the last part of our tour, after seeing Bangkok, Phuket, and Koh Phi Phi. While all these places had their certain highlights, we all agreed that Ao Nang was the best part, and the reason for that was Baan Santi.

It is a bit off the main road and we knew this going in. Since we stayed in hotels and resorts for the rest of the time, we wanted to have our own private luxury place, and Baan Santi delivered.

It's perfect for 3 couples because all three bedrooms were pretty much the exact same, with lots of closet space and en suite bathrooms. The place is HUGE, like 4300 sf., and that doesn't include the grounds, which are just enormous. It's immaculately kept, as housekeeping comes every day to clean, the pool guy cleans the pool every other morning, and I'm not sure when the grounds are done, but it was perfectly maintained.

The cost was less per couple than what we had been spending on hotels per night, and with the rate, we got Ching, the Property Manager, who greeted us with drinks and a tour from the start. She was attentive to our needs and arranged Thai chefs for us to come in one night and make an incredible meal, scooter rentals, as well as massages for me and another girl, right on our shaded deck area. We also got Pong, who would drive us anywhere in Ao Nang from 9-10 PM, and would deliver whatever we needed (food supplies, drinks, ice, etc.). We also got a cell phone which was useful to keep in contact with Pong, and arrange our elephant trekking tour (which was just ok, I don't really recommend that.)

The only reason I took a star off for service was because we were told that Pong would do drives after 10, but for a fee. We tried to use this feature but when we called him at 11 his phone was off. I'm not sure if it was a miscommunication between us and him or the management and him, but we ended up having to get a tuktuk late that night.

Which brings me to why I took a star off for location. Now this is seriously off the beaten path. As in, it's on a dirt road in the middle of nowhere. Ao Nang is super small (literally takes about 5 minutes from the villa to drive into town and we even walked it once.), and it took the tuktuk an hour and half of driving around, calls to Ching in the middle of the night, and bottoming out several times on the dirt road to find the place when we couldn't get a hold of Pong.

That said, it was small potatoes compared to what we gained from that enormous, private, and luxurious villa, and being away from the whole tourist crowd (there are LOTS!) made it totally worth it. We were on holidays and stuff like that isn't worth complaining about. I would stay there again in a heartbeat, and longer than just 4-5 days. As in, I would live there right now if I could!

Date of stay: April 2011
Travelling group: With Friends
Your age range 25-34
Would you recommend this hotel to a friend?   Yes.
Recommended for:
Was this review helpful? Yes
This review is the subjective opinion of a Tripadvisor member and not of TripAdvisor LLC.
Problem with this review? Thank you. We appreciate your input.

Nottinghamshire.
Reviewed 25 May 2010 for a stay in May 2010
Date of stay: May 2010
Liked best: Spaciousness
Liked least: Nothing
Travelling group: Family (extended)
Your age range 55-64
Would I recommend this holiday rental to my best friend?
Recommended for:
Was this review helpful? Yes
This review is the subjective opinion of an individual traveller and not of TripAdvisor LLC nor of its partners.
Problem with this review? Thank you. We appreciate your input.

Date of stay: July 2014
Liked best: servicios, diseño del apartamento, funcionalidad y entorno
Liked least: no destacaria nada incorrecto. es un paraiso
Travelling group: Con mi pareja
Would you recommend this hotel to a friend?   Yes.
Recommended for:
Was this review helpful? Yes
This review is the subjective opinion of a Tripadvisor member and not of TripAdvisor LLC.
Problem with this review? Thank you. We appreciate your input.
Previous Next
1 2
Updating list...
Do you own a holiday rental? List it here.

Looking for a place to stay in Ao Nang?
View all 148 holiday rentals