“Great Villa”
cnY2XzMwX2RaMw==
other travellers have booked this property 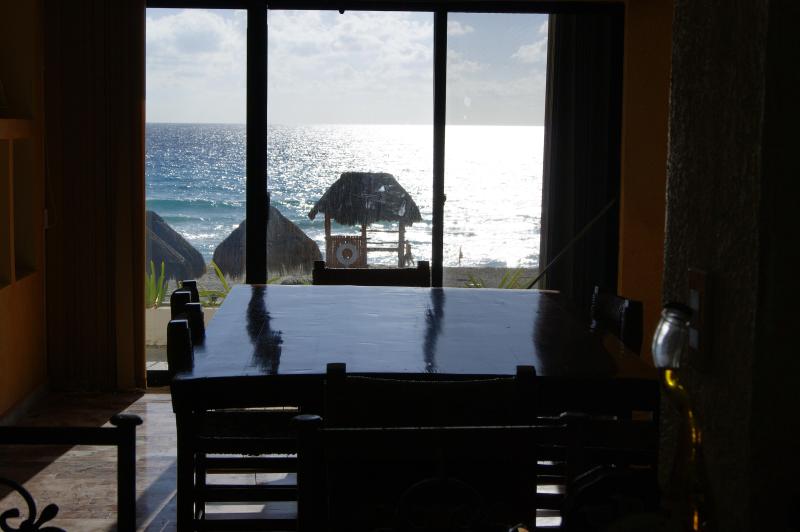 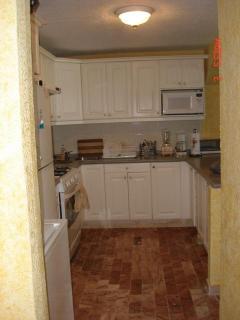 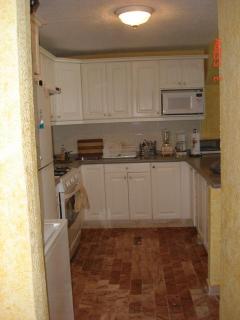 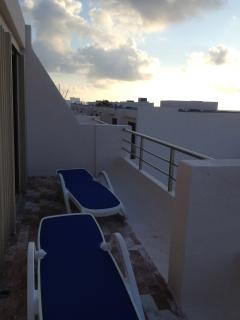 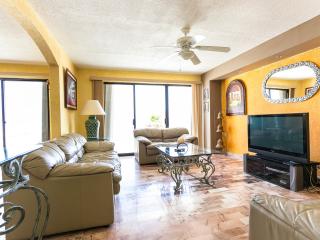 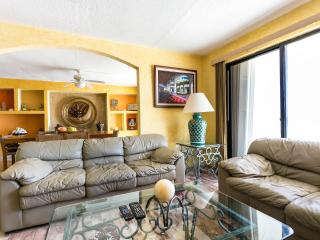 Very good - based on 18 reviews
Write a Review

We had a great time in Cancun, Linda was helpful to us. The man who takes care of the condo was helpful and kind as well, although it was difficult because he did not speak english. I realize that it is Mexico, and I don't expect them to speak my language, but it was hard to communicate issues that we had. The condo was okay, but while we were there, many things went wrong. First, we arrived and wandered down to the pool, only to get yelled at and disrespected by some of the other condo owners who apparently don't appreciate the people who just "visit" while they "have to live there". There were a large number of them that were kind, but a few were very rude and crabby. We found that there was one pool that we were "unwelcome" at. Then, when we arrived, the air conditioning wasn't working. So we slept the first night in miserable sticky heat. They came and spent hours, said they fixed it, but it was not fixed. So again, we slept in sticky heat. We woke up on the third day and headed downstairs, and suddenly I slipped and found myself flat on my back, having smashed my head on the wall and my elbow on the floor, as the ceiling had started leaking during the night and the floor was covered in water. Again, they came and spent hours fixing it, but they didn't have the correct parts (I think.... it's hard because they don't speak English) so it took until that evening to have it working. So, there were people in and out all day, which makes it hard to relax when there are strangers in your condo. Also that morning, after we cleaned up the mess on the floor and I took an Advil for the bump on my head, we made coffee. The coffee pot apparently did not work, because it made a HUGE MESS on the floor and all over the cabinets and countertop. It was spilling water and grounds all over the place and we couldn't get it to stop. We finally just had to sent the whole thing in the sink and wait for it to be done, and clean up that mess. A few other minor inconveniences, but again, it's Mexico. The beach was absolutely beautiful. We could not have asked for a better view. If you are a young family, or an older couple, this place was great, (aside from the problems). But if you are looking to stay up late and listen to music and "party", this is not the place. Most of the people here are retired. You had to be out of the pool by 9. We didn't mind this at all. We loved that the staff was on top of any and all rule breakers, it made for a more relaxing vacation for us, but for some, it might be frustrating. All in all, I would give it a 6/10. Which, for Mexico, isn't a bad number.

Date of stay: February 2017
Was this review helpful? Yes
This review is the subjective opinion of a TripAdvisor member and not of TripAdvisor LLC
I'm very sorry you had a bad experience with some of the owners I must I'm surprise, people there are usually very welcoming to tourist. As far as the A/C I apologize but do to the a proximity to the ocean they take a beating and have to be replaced every so often which was done immediately although it does take time for the tech to purchase a new one and set it up. I must say that each room has an a/c and it was unfortunate that it was the room you were staying at. I understand they did try to fix it meanwhile the new one was purchased and installed. I'm terribly sorry about the leaking due to the a/c and your fall. The coffee pot has been replaced. I have asked the property manager to make sure everything works like it should. Please accept my apologies and if you decide to comeback to Cancun I will make sure you have a great time with zero mishaps.
This response is the subjective opinion of the management representative and not of TripAdvisor LLC
Problem with this review? Thank you. We appreciate your input.

35 helpful votes
“Location, beach, amenities, this place has it all!”
Reviewed 27 December 2016 for a stay in December 2016
4
people found this review helpful

Our family of 5 just came from a 12-day stay at Linda's villa. It is beachfront living at its finest. From our first contact with Linda and throughout our stay, things could not have gone smoother. There is a 24-hr., on-site contact person if you need help with anything. It does help if you know some basic Spanish but not totally necessary. It is in the upscale part of the hotel zone, has a beautiful swimming beach with many lifeguards. Worth noting that the surf was strong at that time of year, but we swam in the ocean every day. For those that don't care for ocean swimming, the complex has 3 pools, rarely crowded. Linda's particular unit is located in a perfect spot; corner with fantastic views and easy access to the main pool, beach, and grand palapa right outside the unit, where my husband would sit each morning and drink his coffee. The entire condominium complex is kept very secure and clean. It was so nice to have the new grocery store in the mall across the street, 3-minute walk to bus stop, taxis outside the complex, police and fire right around the corner, restaurants and shops in either direction. The location of this condo couldn't be better, and contact with Linda was a breeze. We can't wait to return!

Date of stay: December 2016
Would you recommend this hotel to a friend?   Yes.
Was this review helpful? Yes
This review is the subjective opinion of a TripAdvisor member and not of TripAdvisor LLC
Thank you Carrie it was a pleasure having you. Most important I' glad you had a good time and hope you felt at home. Thank you!
This response is the subjective opinion of the management representative and not of TripAdvisor LLC
Problem with this review? Thank you. We appreciate your input.

My husband, 20 month old daughter and both grandmas stayed in Linda's condo Nov 2-8, 2014. She arranged airport transfers for us which were prompt and reasonably priced, also including a carseat for my daughter, free of charge. Overall we were very pleased with the condo - it was great to have the bedrooms on a separate floor from the kitchen & common areas. We could put our little girl to bed and still stay up talking or playing games. The beach is very nice and easy to get to, with a short walk down some stairs and through the pool area. The lifeguards and security staff were all very professional and friendly.

There is a bus stop just a 3 minute walk from condo, so convenient. We bought groceries at the new Super Chedraui market near the convention center, but on our last day, another beautiful supermarket opened in the Kukulkan Mall, right across the street. This a MAJOR bonus for our next visit! There are plenty of restaurants in easy walking distance (considering we had a stroller to contend with, this was very nice). We loved La Habichuela Sunset for a fancy dinner out in a lovely outdoor setting. Santo Mariscos, just next to La Destilleria, had the BEST tacos for a great price.

We would definitely stay in Linda's condo again - we like being more independent, being away from the noisy pool-bar scene at all-inclusive places and not having all the excesses of electricity and wastefulness found in many of the major hotels.

Date of stay: November 2014
Travelling group: Extended Family
Your age range 35-49
Would you recommend this hotel to a friend?   Yes.
Was this review helpful? Yes
This review is the subjective opinion of a TripAdvisor member and not of TripAdvisor LLC
Problem with this review? Thank you. We appreciate your input.

This place is amazing. The views you have from every room are awesome. Every room has a separate air condition that works good.(hard to get that in Mexico) The kitchen is large and has everything you need I really enjoyed cooking breakfast in the morning with the view from the kitchen. The beach is literally 100 yards from the door. I loved the fact that we were able to go back and forth to your room in no time. They have boogie boards and sand buckets for the kids. The beach was amazing and the lifeguard is constantly checking the riptide. I loved this place and can't wait to come back

Date of stay: June 2014
Liked best: Views
Liked least: Store on site was small
Travelling group: Extended Family
Your age range 35-49
Would you recommend this hotel to a friend?   Yes.
Recommended for:
Was this review helpful? Yes
This review is the subjective opinion of a TripAdvisor member and not of TripAdvisor LLC
Problem with this review? Thank you. We appreciate your input.

Maryland
Reviewed 29 April 2014 for a stay in May 2013
2
people found this review helpful
Date of stay: May 2013
Would I recommend this holiday rental to my best friend?
Recommended for:
Was this review helpful? Yes
This review is the subjective opinion of an individual traveller and not of TripAdvisor LLC nor of its partners.
Problem with this review? Thank you. We appreciate your input.

DC
Reviewed 24 April 2014 for a stay in April 2014
1
person found this review helpful
Date of stay: April 2014
Would I recommend this holiday rental to my best friend?
Recommended for:
Was this review helpful? Yes
This review is the subjective opinion of an individual traveller and not of TripAdvisor LLC nor of its partners.
Problem with this review? Thank you. We appreciate your input.
Previous Next
1 2 3
Updating list...
Still can't find what you're looking for?

Looking for a place to stay in Cancun?
View all 822 holiday rentals