US$34
View deal
Agoda.comUS$35
TravelocityUS$38
CheapTicketsUS$38
View all 13 deals
Prices are provided by our partners, and reflect nightly room rates, including all taxes and fees known to our partners. Please see our partners for more details.
Payments made by partners impact the order of prices displayed. Room types may vary.
laurenwilkes20
Totnes, United Kingdom
2312

We booked two nights here through agoda and easily checked in with no problems. After some research we found that this was the best priced place on Railey beach at short notice with room available.
The place is lovely and the rooms were great. We had accidentally booked twin rooms instead of doubles but each room basically had two small double beds!
The restaurant was really nice and affordable and the included breakfast was nice
The pool was lovely and the resort was within walking distance of everything we wanted to see.
Would recommend this place!

See all 522 reviews
Payments made by partners impact the order of prices displayed. Room types may vary.
Nearby Hotels 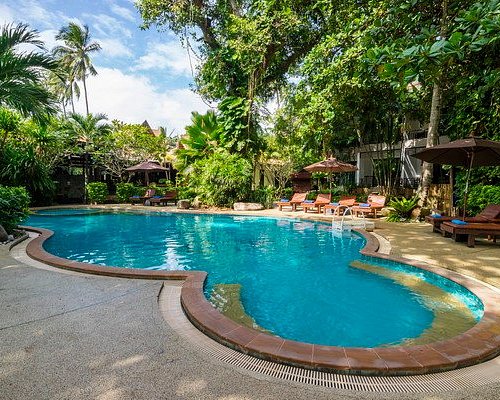 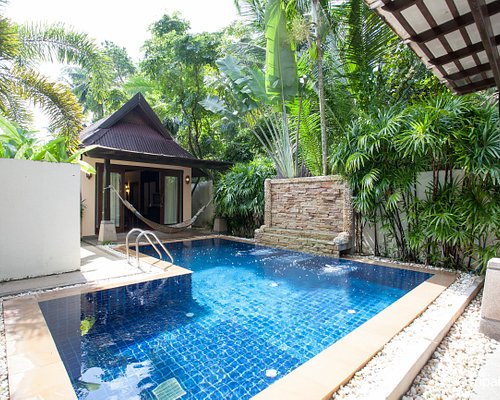 Breakfast included
Railay Bay Resort & Spa
US$69
Booking.com
View deal
Agoda.com
US$50
Trip.com
US$43
FindHotel
US$46
View all 16 deals from US$43
2,724 reviews
0.4 miles from Diamond Cave Resort & Spa
We compared the lowest prices from 16 websites 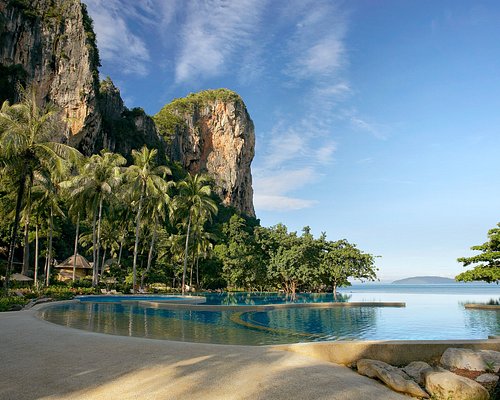 FindHotel
View deal
Agoda.com
US$25
Priceline
US$31
StayForLong
US$36
View all 14 deals from US$23
1,008 reviews
0.3 miles from Diamond Cave Resort & Spa
We compared the lowest prices from 14 websites
Rapala Rock Wood Resort
US$10

FindHotel
View deal
Hotels.com
US$11
Priceline
US$11
Agoda.com
US$16
View all 15 deals from US$10
75 reviews
0.1 miles from Diamond Cave Resort & Spa
We compared the lowest prices from 15 websites
Breakfast included
Railay Village Resort
US$97

We were lied to straight from the start of our stay at this hotel! they lured us in with what they clearly know to be a cheaper price than the hotel next door, yet once we carried all our bags up the hill they told us the real price which was exactly the same as the hotel next door, which I'd already checked out and knew was decent, however I did not realise until after we'd paid that diamond cave resort was apparently the worst hotel on the island and it definitely lived up to its name!! Whilst we were out the staff clearly went into our room searched through all our bags and stole all the money that was left in them, nearly £200 altogether, they then put everything back to how they thought they'd found it and left. They clearly do this to everyone's rooms and you wouldn't even notice unless they actually steal money. When we told the staff and accused them they asked if we saw them and once they knew we couldn't prove it they couldn't care less. So infuriating! AVOID THIS HOTEL AT ALL COSTS, even if you don't have any money stolen you can be sure they have searched through all your stuff, worst hotel I've ever stayed in!!!!!

This review is the subjective opinion of a TripAdvisor member and not of TripAdvisor LLC
LoisKJ
Cardiff, United Kingdom
33
Reviewed 6 March 2014
AVOID, AVOID, AVOID!!!

Please avoid this place when staying in Railay as the staff are out to deceive and rob you however and whenever they can!
This hotel does not even deserve 1 star!!!
We arrived in Railay with no accommodation booked but we we're heading towards Mountain view which we had previously looked at online, on our way there we were stopped by a member of staff from Diamond Cave who showed us a picture and gave us a price for 3 people which was cheaper than the other hotel, we decided to go and have a look at the room but after carrying all of our bags up the steep hill, we we're told that all of the cheaper rooms had gone therefore we had to have the 'better' room' which was 2100 baht a night, we later realised they make up the price as they go and charge what they like which is way over the odds! We we're shown the first room, the tv and light did not work, the second room he showed us did not have a fan and the tv did not work however we decided to take it as we we're all quite fed up by now! We paid for the room then went out, in the mean time we had heard that Diamond cave had a reputation for staff stealing money, when we got back to our room to check, we realised that the staff had been through all of our bags very thoroughly and taken £200 altogether (of different currencies that we had as we are travelling) from 2 bags, it could have only been the staff from the hotel as we had made sure that all of our doors were locked when we left therefore they were the only people with access, when we went to reception they were not surprised or bothered and the woman I was directed to answered her phone to someone whilst I was explaining what had happened then walked away from me! They we're very rude and cocky as they quite clearly knew there was very little we could do! She then accused my sister and friend if stealing my money telling me they had no spare key for our room so couldn't have been them!! The staff at this hotel are clearly all in on the theft as the guy who sits at the bottom of the hill watches everyone leave and enter the resort so they know when you're out, our money was not locked away but was hidden however I believe the staff go through everyone's belongings so even if you lock your belongings away they will still be routing through your things whilst you are out, therefore just avoid and go somewhere where the staff aren't out to rob you!!

This review is the subjective opinion of a TripAdvisor member and not of TripAdvisor LLC
MaddorainSk
96
Reviewed 1 March 2014 via mobile
We loved this place and will return!

Excellent location, great staff, beautiful views an d pools, and fairly good rooms for a decent price (apart from a serious ant problem ...but it is Thailand after all). Close to the amazing caves and not far from the west beach which is on the list of top beaches we have visited. Also, loved the pool and the beautiful gardens around the resort. Definitely recommend!

This review is the subjective opinion of a TripAdvisor member and not of TripAdvisor LLC
Vasily T
Krasnodar, Russia
9275
Reviewed 25 February 2014
Horrors in a fine place

Beautiful territory and it everything.
Rooms demand renovation, are badly cleaned. In number there is no teapot, the hair dryer and the safe. There is an ordinary TV with badly showing channels. Number cleaning only on demand. Attention! The personnel steals things and money from number! Leave everything valuably in safes on a reception or you carry with yourself. Absolutely unfriendly personnel, smile only when you move into as soon as you start something demanding, at once all courtesy vanishes.

This review is the subjective opinion of a TripAdvisor member and not of TripAdvisor LLC
LorraineAG
Warrenton, Virginia
10035
Reviewed 8 February 2014
okay for the price

Our experience was not as horrible as others. I thought for the price, how bad could it be? The hotel like rooms were okay. The floor wasn't clean and the bathroom light didn't work. because of the language barrier we opted not to bother with asking to fix it. It would have been more trouble than it was worth.
The pool was nice but only a few chairs and no afternoon sun. The bar was closed.
We all (family of 5) happen to fall ill the day after our included breakfast buffet. I wouldn't go back, or at all given another chance to go to Railey.

Room tip: We had a nice balcony in the deluxe room in front of the pond which was cleaned daily.
Ask LorraineAG about Diamond Cave Resort & Spa
1  Thank LorraineAG