Great experience - Review of The Laindons

The Laindons
The Laindons
Contact accommodation for availability.
There are similar hotels available.
View all
MidwifeMez
Port Fairy, Australia
11

Review of The Laindons
Reviewed 1 July 2018

Very welcoming hosts, in a gorgeous B&B.
Great location in Hastings which is as charming as our hosts. High quality B&B, rooms elegant, beautifully furnished but comfortable.
Great welcome, took us in late when there was 'no rooms at the Inn" anywhere.
A welcome wine, lots of helpful info, the gorgeous outlook from the sunroom at breakfast while being entertained by Karen and Malcolm made it a great package More

Thank you very much, for a great review hope to see you very soon for another great stay. Regards Malcolm

Report response as inappropriateThank you. We appreciate your input.
This response is the subjective opinion of the management representative and not of TripAdvisor LLC
See all 361 reviews
Payments made by partners impact the order of prices displayed. Room types may vary.
Nearby Hotels 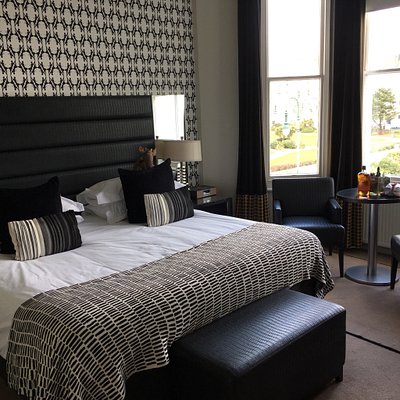 Bannatyne Spa Hotel
US$162
Booking.com
View deal
Free cancellation
Expedia.com
US$171
Trip.com
US$160
Hotels.com
US$171
View all 15 deals from US$160
1,473 reviews
3.3 miles from The Laindons
We compared the lowest prices from 15 websites

Senlac Guest House
US$104
Booking.com
View deal
Free cancellation
Expedia.com
US$97
Hotels.com
US$97
Priceline
US$109
View all 15 deals from US$97
317 reviews
0.7 miles from The Laindons

Expedia.com
View deal
Reserve now, pay at stay
Hotels.com
US$107
CheapTickets
US$107
Travelocity
US$107
View all 6 deals from US$107
64 reviews
0.8 miles from The Laindons
We compared the lowest prices from 6 websites
Grand Hotel
US$123

Room was beautiful, had a lovely big bath for two, very nice lotions and potions, bed very comfortable all high quality. Unfortunately the extractor fan in the toilet did not turn off so I had to put in ear plugs but I still did not sleep very well, it was so noisy. When we mentioned this in the morning, it was covered over as a joke with an apology and explanation that they had a electrician on his way, so they know about the problem but didn't make us aware of it, so my sleepless nite could of been avoided, breakfast was very tasty, except for the hair in my partner's food, just an apology and a light hearted comment of don't review it, but then to add real insult to injury was that 5 minutes after we was supposed to be out of the room we had a bang on the door, give us 5 we said then just as we was about to leave another big bang, then on exiting the building we could hear the lady of the house complaining about us very loud and rude, when she was told we was still there she just said we'll shut the door and carried on complaining, so I said to my partner come on I'm not having this the other owner said what, what the problem, I said her complaining about, us so he just walked away, we was going to go back as every thing was lovely but we are not now, such a shame

Many thanks for your review highlighting some of the high quality features that The Laindons provides for it's guests, this is usually the feedback we receive from our guests. We are therefore very disappointed that you were not fully satisfied with your stay. Please accept our sincere apologies for the elements which you were dissatisfied with.

Firstly, we apologise for not warning you not to use the extractor fan in the toilet. We had booked an electrician who was arriving on the day of your check-out, so it was entirely our fault for not flagging that up to you on arrival. Many apologies for your disturbed night's sleep.

Secondly, huge apologies for the hair in your partner's breakfast. This has never happened before due to our vigilance in the kitchen regarding hygiene and our guest's health & safety. We were as upset by it as much as you were, so please be assured we will do our upmost for it never to happen ever again.

Thirdly, regarding the knock on your door prior to your departure, this was just a member of the housekeeping team requesting to take off the bedding from the bed for an imminent linen collection from our laundry service. There was no intention of hurrying your check-out.

Finally, raised voice you heard from the owners quarters had no relation to you or your partner. Of course you should not have heard this, but it was due to a series of unfortunate incidents which had come to a head. It was totally out of the ordinary, of course it should not have occurred and you should not have been aware of it, and we will ensure that it does not occur again.

Once again please accept our sincere apologies for any stress and inconvenience caused during your stay. The unfortunate things that did occur were exceptional and have never happened before. Please be assured that we take onboard all the issues that you have raised and that we take them very seriously, we will do our utmost for them not to occur ever again. Please we aware that our guests are usually delighted with their accommodation and the service they receive. If ever you come back to Hastings we would be delighted to welcome you back to show you what our guest experience is usually like. If you do take us up on this offer please let us know and we would be happy to offer you a 25 per cent discount from that bill.

Report response as inappropriateThank you. We appreciate your input.
This response is the subjective opinion of the management representative and not of TripAdvisor LLC
Wendy M
London, United Kingdom
1947
Reviewed 8 June 2018
Best stay in Hastings!

This was our second visit to Hastings and our first time staying at The Laindons, we are so glad to have stayed here. I can't imagine a much more perfect boutique B&B/small hotel. The decor is simply perfect, the owners clearly have an eye design -- bright and modern but also comfy! Lovely art in the rooms, and amazing attention to detail -- down to the linens (heavenly) and Seascape toiletries. Lovely touches like the honesty bar and a box with a toothbrush and such if you forgot your essentials. Breakfast was stunning and cook was so attentive and friendly and making sure we got everything we wanted and more. Staff (manager Ian) was very friendly and helpful with local suggestions to visit, and guided us to free parking that's very convenient to the hotel. Great shops nearby, and cool coffee shop just downstairs. Really lovely location in old town Hastings but you can walk to more modern parts of town in 10 mins (and of course the famous seaside). You have to go check out the new pier (about 15 mins away).

Room tip: we stayed in room 2 but all rooms looked lovely
Ask Wendy M about The Laindons
3  Thank Wendy M

Thank you so much for your wonderful review, we really appreciate your lovely comments and hope you will stay with us again in the future.

Many thanks & best wishes
The Laindons Team

Report response as inappropriateThank you. We appreciate your input.
This response is the subjective opinion of the management representative and not of TripAdvisor LLC
nicolavferguson
Bedford, United Kingdom
52
Reviewed 4 June 2018
The best place to stay in Hastings!!!

We stayed here during the May bank holiday having only decided to visit
Hastings the week before. We spoke to Malcolm and Ian and they offered to 'create' us a room for the weekend. This room was beautiful - we are considering asking to stay in the loft room for the pirate weekend! Malcolm and Karen are the most incredible hosts, i met them by accidentally walking into their house whilst rushing to get out - they were so kind and laughed at my disorientation!! Staying at the Laindons is home from home comfort. Both Karen and Malcolm make you feel so welcome - the only piece of advice I'll give you is: don't miss the breakfast - it's absolutely fantastic!!! Thank you both - we can't wait to see you again!! xx

Hi
We loved having you stay ,next time we are going to party with you !!!
Come back soon
XX

Report response as inappropriateThank you. We appreciate your input.
This response is the subjective opinion of the management representative and not of TripAdvisor LLC
jaxx35
Essex
4796
Reviewed 19 May 2018
Boutique accommodation in Hastings

We enjoyed a lovely one night stopover at The Laindons this week. An excellent location for the old town, nice and quiet and a short walk to the sea. Karen and Malcolm (? Apologies as I thought he Introduced himself as Ian!) were fantastic hosts welcoming us warmly. We had the green room - really spacious, light and a super huge comfy bed. The bathroom was a little small but adequate, and all the thoughtful touches made our stay a pleasure. The breakfast was delicious and Karen’s blueberry waffles were fab. We bought a jar of the Seville marmalade back with us it was so scrummy. Would stay here again if ever in Hastings and would thoroughly recommend.

Trip type: Travelled as a couple
Ask jaxx35 about The Laindons
1  Thank jaxx35

Thank you so much for your wonderful review, we all really appreciate it - makes everything so worthwhile, we're delighted. Please spread the word and we look forward to welcoming you again some day soon.

Report response as inappropriateThank you. We appreciate your input.
This response is the subjective opinion of the management representative and not of TripAdvisor LLC
Alexander H
11
Reviewed 16 May 2018
Heavenly Hastings old townhouse grandeur

When I arrived I was welcomed by the hostess with the mostest, Karen, who offered me a glass of wine. Just the welcome you need when you're in need of a bit of R&R! Ran a hot bath in the freestanding tub in the room and then slipped in between the fresh cotton sheets into one of the comfiest beds you could wish for, enjoying the peaceful quiet of the old town. The breakfast next morning was spot on & they make a lean, mean, green machine of a juice to get that vitamin injection. Lovely touches all round from the fish chocky on the pillow to the bath lotions and hooded dressing gowns. I'd highly recommend a stay with Karen & Malcolm if you're in the area. Plus, if you wake up early enough you can enjoy watching to fishing boats going out for their morning catch, due to The Laindons' ideal location to the seafront.

Thank you very much for such a lovely perfect and personal review, it was a pleasure ready it. Please come and stay next year when we at the Laindons would be in our second year and hopefully would be even better at hospitality than this year. Kindest regards Malcolm

Report response as inappropriateThank you. We appreciate your input.
This response is the subjective opinion of the management representative and not of TripAdvisor LLC
View more reviews
PreviousNext
1…161718…