US$145
View deal
Free cancellation until 21/10/21
Trip.comUS$162
Agoda.com
CheapTicketsUS$194
View all 15 deals
Prices are provided by our partners, and reflect nightly room rates, including all taxes and fees known to our partners. Please see our partners for more details.
Payments made by partners impact the order of prices displayed. Room types may vary.
BrewerColin
Lichfield
2111

Cheap London hotel with some problems

It's always good to find a reasonably-priced hotel in central London (I've stayed in the near-by Tavistock hotel on pevious occasions and been more than satisfied. However, I was very disappointed with the 'Royal National', for the following reasons.
1. The accommodation is situated on both sides of a central courtyard, and the room numbering system and internal directions to the various hotel facilities are very confusing.
2. It was impossible to regulate the room temperature, which was overpoweringly hot.
3. Even for the £80 per night price range, the 'extras', limited to tea, coffee sachets, soap bars, were meagre: the towels were only just above 'hand towel' size.
4. What I found very irritating was the attitude of one of the male reception staff: since neither the electric kettle nor the hair dryer were working (probably a comon fuse had blown) , I asked Reception on the way out to an Institute dinner to sort this out whilst i was out, but was very curtly informed that I should go to the appropriate desk situated on a higher floor, as "this is nothing to do with me" (sic)
I hate this ort of attitude, so won't be staying at this hotel again!More

Show less
See all 10,111 reviews
Payments made by partners impact the order of prices displayed. Room types may vary.
Nearby Hotels 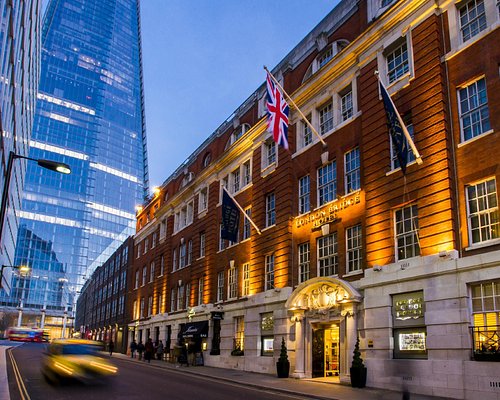 Taking safety measures
We compared the lowest prices from 19 websites
The Tower Hotel
US$129
Booking.com
View deal
Reserve now, pay at stay
Expedia.com
US$128
Destinia.com
US$114
Priceline
US$136
View all 17 deals from US$114
11,060 reviews
2.6 miles from Royal National Hotel

Taking safety measures
We compared the lowest prices from 18 websites
Tower Suites by Blue Orchid
US$246
Booking.com
View deal
Free cancellation
Reserve now, pay at stay
Expedia.com
US$245
Destinia.com
US$185
Hotels.com
US$245
View all 15 deals from US$185
228 reviews
2.4 miles from Royal National Hotel

Taking safety measures
We compared the lowest prices from 15 websites
DoubleTree by Hilton Hotel London -Tower of London
US$150
Booking.com
View deal
Expedia.com
US$150
Hotels.com
US$150
Priceline
US$150
View all 18 deals from US$150
7,392 reviews
2.3 miles from Royal National Hotel

Taking safety measures
We compared the lowest prices from 18 websites
DoubleTree by Hilton Hotel London ExCeL
US$163
Booking.com
View deal
Expedia.com
US$162
Trip.com
US$146
Hotels.com
US$162
View all 17 deals from US$146
1,449 reviews
7.2 miles from Royal National Hotel

We stayed a night in October 2012 and found it to be OK. The room was clean, and the breakfast good. Was a bit noisy in the night, but this is a very busy hotel. It is well placed for London, and has a car park underneath (£18 for 24hrs) Overall would give it 7 out of 10, and would stay again

This review is the subjective opinion of a Tripadvisor member and not of TripAdvisor LLC.
JenHTravels
Greensboro, North Carolina
1713
Reviewed 3 December 2012
Decent

I stayed here for two nights and felt that it was decent for the price. If I were staying somewhere and not doing a tour, I would probably go to a hostel. The rooms were decent but consistently clean. There is no wifi in the rooms though. The people working the front desks were nice and helpful. The lobby is pretty nice. They have plenty of vending machine options (including a Ben and Jerry's vending machine, who knew...) and there are a few restaurants that are actually attached to the hostel itself. The Indian restaurant attached to the hotel was pretty good. There is also a really good Chinese restaurant just next door with great lunch specials.
A nice plus is that a couple of the main city tour bus lines has a stop right outside of the hotel. You can buy tickets there, which is really convenient. And it's nice to be able to stop right at your hotel after a long day of site-seeing.
A complaint that I had was that the hotel was so large and it was like a maze. Trying to find your room was a pain. I got lost so many times. Another is that Contiki (tours for people 18-35) use this for their hotel in London so there are A LOT of loud groups of younger people.
Overall, it wasn't a bad hotel, but it would definitely not be my first choice in London.

This review is the subjective opinion of a Tripadvisor member and not of TripAdvisor LLC.
Ellen F
Pokolbin, Australia
1010
Reviewed 3 December 2012
Keep an open mind

Three of us stayed at the Royal National for a two and a half week period over October.

Yes, there are several large groups around, but don't they deserve to have a nice holiday too? Rather than you sneering at them? Take earplugs if you don't like noise.

Room is cleaned every morning, with fresh towels and tea/coffee. Staff are friendly and helpful.
Room is warm, and comfortable. Please stop being a snob about this hotel, keep an open mind and enjoy your time in London.

This review is the subjective opinion of a Tripadvisor member and not of TripAdvisor LLC.
JacMBrisbane
Queensland, Australia
238168
Reviewed 1 December 2012
Decent

This review is the subjective opinion of a Tripadvisor member and not of TripAdvisor LLC.
ChristineL1084
Toronto, Ontario
2540
Reviewed 1 December 2012
Great location, budget friendly!

I stayed for 2 nights at the Royal National before heading off on a Contiki tour, considering that the Contiki HQ "basement" is located in the hotel, be warned that yes there are large groups of younger travelers in and out of the hotel all the time. With the tours leaving as early as 6am, some noise is bound to happen with all the excitement. Now, having said that, I was on the "older" end of the Contiki group (being 28 and not 18) and being a travel agent, look at all the details of a hotel before reviewing it. So hopefully my review is helpful for a range of people looking at this hotel.

First off, this hotel is basic, no "bells and whistles" as they say. The lobby was big and fairly bright with internet stations, and vending machines as well as a big courtyard where the taxi's/busses drop off. Everything was well lit, and maintained as far as a lobby goes.

My check-in was done through Contiki in the "basement" so I'm not sure how they handle that process. I first got to the hotel I couldn't check in yet, so they held my suitcase for me, no problems there at all.

When I finally checked in and got to the room, it was easy to find, yes the hallways are long, and if you've gotten a room at the end, it can be a bit of a walk. It's a huge hotel, so this can be expected with any big hotel. Yes the carpeting looks old, and the walls could use a face lift, but it was still clean nonetheless. For the size of the hotel the elevators were quick and I never had to wait more than a few seconds for one to come. A definite plus.

I had to change rooms because of the way I booked it, but there was no drama there either. The first room was a triple occupancy room with 3 single beds, not much room for anything else, but who needs a lot space when you're seeing a city like London in 48 hours?! The bathroom was small but sufficient. Towels were old and a little rough, but again, this isn't a 5* luxury hotel, so even having towels was a bonus. My room was overlooking the street and I did find it noisy because the one window wouldn't close all the way, but being a smart traveler, I had ear plugs, and that solved the problem. The second night I had a double room, it had 2 single beds this time, so it had a little more space in the room than the previous night, and the bathroom was the same size. The shower had tons of hot water and lots of pressure so no complaints there.

The location is great, just a short bus ride to Trafalgar Square and a pick up point for a few different Hop On/Off City bus tours, making it easy to get around the city. It's also close to the Russell Square tube station, so it's easy to find your way around.

All in all, if you're looking for something in a central location, decently priced, and a place to lay your head a night The Royal National is a great option. However if you're looking for 5*, prime luxury accommodation, then keep looking, this hotel is not for you. I would have no problem staying here again, knowing how little time I actually spent in the room, why pay for unused space?

This review is the subjective opinion of a Tripadvisor member and not of TripAdvisor LLC.
View more reviews
PreviousNext
1…439440441…