As an American visiting London, I fell in love with Room 2! It was convenient, clean, comfortable, and fun. The area offers an authentic British vibe where you can enjoy a cup of tea, a lovely bite to eat, a proper pint of beer, and some shopping. Would definitely come back and stay again!More

Thank you for taking the time to leave us a review. I'm glad you had a blast whilst staying with us and enjoyed the Room 2 experience. It's our latest development we wanted to offer our patrons something different and something that had its own character, i'm glad this left you with a positive feeling. The surrounding area is great as you mentioned with plenty of little bars and restaurants.
Once again i thank you for getting back to us and wish you well.

Report response as inappropriateThank you. We appreciate your input.
This response is the subjective opinion of the management representative and not of TripAdvisor LLC
See all 455 reviews
Payments made by partners impact the order of prices displayed. Room types may vary.
Nearby Hotels 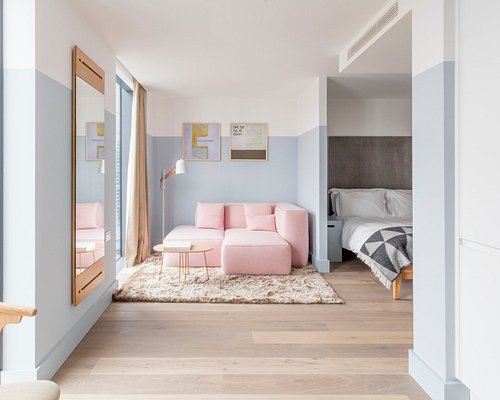 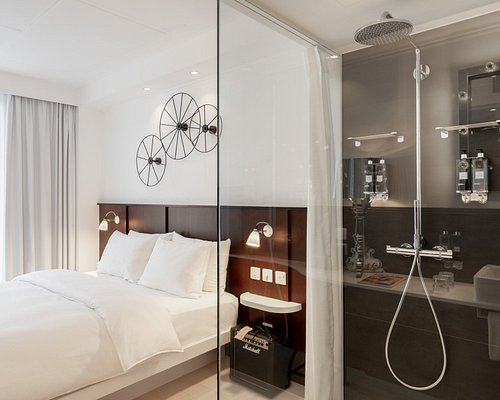 Expedia.com
View deal
Free cancellation
Pay up to 12X
Booking.com
US$254
Priceline
US$254
Hotels.com
US$253
View all 15 deals from US$253
75 reviews
5.0 miles from Lamington Apartments - Hammersmith
We compared the lowest prices from 15 websites 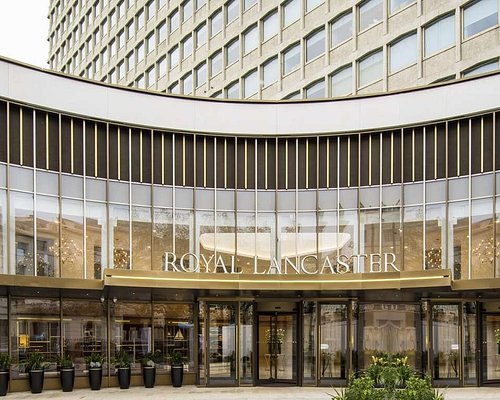 Priceline
View deal
Free cancellation
Expedia.com
US$422
Hurb
US$102
Hotels.com
US$422
View all 21 deals from US$102
1,102 reviews
2.5 miles from Lamington Apartments - Hammersmith

Travelocity
View deal
Priceline
US$238
Destinia.com
US$219
Booking.com
US$238
View all 16 deals from US$219
844 reviews
4.6 miles from Lamington Apartments - Hammersmith

Taking safety measures
We compared the lowest prices from 16 websites
Great value today
The Resident Victoria
US$161
Booking.com
View deal
Reserve now, pay at stay
Expedia.com
US$160
Trip.com
US$150
Priceline
US$161
View all 14 deals from US$150
2,188 reviews
3.7 miles from Lamington Apartments - Hammersmith

Priceline
View deal
Expedia.com
US$483
Prestigia.com
US$435
Booking.com
US$486
View all 14 deals from US$435
283 reviews
5.3 miles from Lamington Apartments - Hammersmith

Priceline
View deal
Free cancellation
Hotels.com
US$84
Trip.com
US$71
Expedia.com
US$93
View all 15 deals from US$71
372 reviews

The staff were friendly and helpful, the apartments were clean and fully equipped plus you get a start up kit such as cereals, milk, snacks, tea and coffee. Location was excellent, restaurants and a convinent store is next door, Hammersmith tube station, shopping area and other restaurants are within a walking distance.

Room tip: They have two types of apartments, traditional and modern the choice is yours both are clean, I would recommend the ones with a balcony
Ask maamiry about Lamington Apartments - Hammersmith
1  Thank maamiry

Many thanks for your feedback!

I am so pleased that you had a good stay at Lamington Serviced Apartments!

I am pleased to hear that you liked the staff, the cleanliness and comfortability of our apartments and the location in regards to the close proximity to the stations and restaurants!

Thank you again for taking the time to write a review, it helps us improve our services for future stays!

We would love to welcome you back in our apartments, for business or leisure!

Report response as inappropriateThank you. We appreciate your input.
This response is the subjective opinion of the management representative and not of TripAdvisor LLC
Mariecharles32
London, United Kingdom
133
Reviewed 17 August 2016
Excellent Stay

Everything was clean and shiny. the studio was furnished really nicely.The area was really easy to get around., lots of public transportation options.Was a perfect weekend in London. Would definitely stay again and of course recommend to friends and family.

Thank you very much for your feedback!

We are very pleased to read that you had an excellent stay in one of our apartments!

Thank you again for recommending us! Do not hesitate contacting our reservations department if you need assistance with a new booking.

We would love to welcoming you back in Lamington in your next trip to London.

Report response as inappropriateThank you. We appreciate your input.
This response is the subjective opinion of the management representative and not of TripAdvisor LLC
Allie060
Hong Kong, China
1318
Reviewed 4 August 2016
Great value for money with easy access to Central London

I've stayed in Lamington's apartments several times over the last 10 years and the apartments are always great. This time I rented a 2 bedroom apartment which seemed almost brand new. The flat was immaculately clean with new appliances & bedding. Location is excellent - about 15 minutes walk to either Shepherds Bush tube and the Westfield shopping centre or Hammersmith tube. Plenty of restaurants and gastro pubs within easy reach. The area is safe making this an ideal base from which to explore London,

Thank you for your review.
Firstly I'd like to thank you for continuing to be such a loyal guest to us. I'm glad you are still enjoying your stays with us as well. We strive to make sure all of our apartments are kept to a very high standard and provide our guests with a service which is second to none. Your review as well as many others help us to continue to improve our services.
Thanks again.

Report response as inappropriateThank you. We appreciate your input.
This response is the subjective opinion of the management representative and not of TripAdvisor LLC
Tiemileal
Sao Paulo, SP
5659
Reviewed 3 August 2016
Convenient and modern!

My family and I (in total, a party of 4 people), stayed at one of the apartments provided by Lamington for 5 days.

They provided us with one of their most recent apartments which featured two doublerooms, one bathroom (with a bathtub), a kitchen area (with a lot of space) and a living room. For our satisfaction the apartment was very clean and very well arranged. The kitchen area was a highlight for me as it had a dishwasher, a washing machine, a kettle, a microwave, a fridge and a stove (pretty much everything).

Breakfast was not provided as this is not a hotel, however they did give us in the first day cereal, milk, coffee and tea sachets, plus a couple of other snacks.

Our apartment was located right across from the agency, at Hammington Grove, which is 7 minutes walking from the Hammersmith station and from the Goldhawk Road station. Across from our apartment there were several off-license stores and a few restaurants (which are quite convenient in case you are too tired or too lazy), and near the Hammersmith station there are several restaurants and shops. In addition, from Hammersmith Grove it takes approximately 15 minutes by foot to reach the Westfield shopping mall (which in my opinion is worth the visit).

We were not in touch with the staff very often, as we barely faced difficulties with the apartment. The only element that lacked was a bit more of information regarding the induction to the apartment, we had to figure out how to manage a few of things of the apartment, such as controlling the heating to using the washing/drying machine by ourselves. But from checking in to checking out they were in general very helpful and kind!

The only issue we faced with the apartment was the wi-fi. The wi-fi barely worked during our stay, which troubled us quite a bit as we needed wi-fi to sort out personal issues related to work and study (not only as an entertainment).

The price charged made sense in contrast to what was being provided, so we can't really complain about it. We are a family of 4 that has visited London a few times in the past, in all these times we chose to stay at three star hotels, which are supposed to be convenient and affordable, but in reality these ended up costing us more and offering less.

Overall, we are very satisfied with Lamington, the apartment offered us more than what we were expecting, the space was incredible for London standards, the service was decent and the location was probably the highlight of our stay. When coming back to London with my family, I would definitely choose Lamington again!

Thank you so much for taking the time to write us this review. It helps us to continue to improve.
I'm glad you were happy overall with your stay and enjoyed the helpful attitude of the staff, the location of our apartments, the space available in the apartments as well as the amenities and complimentary snacks we provide.
I am however dissapointed you didn't have the best wi-fi connection. This is something we are working on improving so i apologise for this. Another point you mentioned was the issue with the lack of information in the induction folder. We are sorry you feel this way and we appreciate your comments. We haven't heard this from many guests but we are glad you brought it to our attention as we will look into this and see how we can perhaps improve it. i also apologise that you weren't clearly shown how to use all the appliances etc I assure you this will not happen again. Once again thank you for your review and we hope you come and stay with us again soon.

Report response as inappropriateThank you. We appreciate your input.
This response is the subjective opinion of the management representative and not of TripAdvisor LLC
Roslyn V
Brussels, Belgium
249
Reviewed 2 August 2016
convenient and excellent stay for family

We had an excellent stay at Hammersmith apartments. I liked this apartment for several reasons. 1. Access to the Tube on both the District, Circle and Piccadilly lines. Easy access to everything. 2. Quiet neighborhood and easy access to great restaurants, a french crepery, coffee places, Pharmacy and grocery store in the tube station. Perfect when traveling with kids. 3. Hammersmith Apartments had great towels and toilets to get us started on our trip. I especially liked the personal touch of milk and cereal for the morning. Very thoughtful. 4. Wifi was great and fast. 5. Friendly staff and the apartment was exactly like it advertised... I highly recommend it.

Thank you for leaving us a review.

Wow, its fantastic to hear that you were thrilled with many aspects of your stay, from the location, to the complimentary snacks, the wi-fi, friendly staff, local shops and amenities. Its great you enjoyed it overall.
We do hope you come back again soon.
We look forward to your return.

Report response as inappropriateThank you. We appreciate your input.
This response is the subjective opinion of the management representative and not of TripAdvisor LLC
View more reviews
PreviousNext
1…272829…