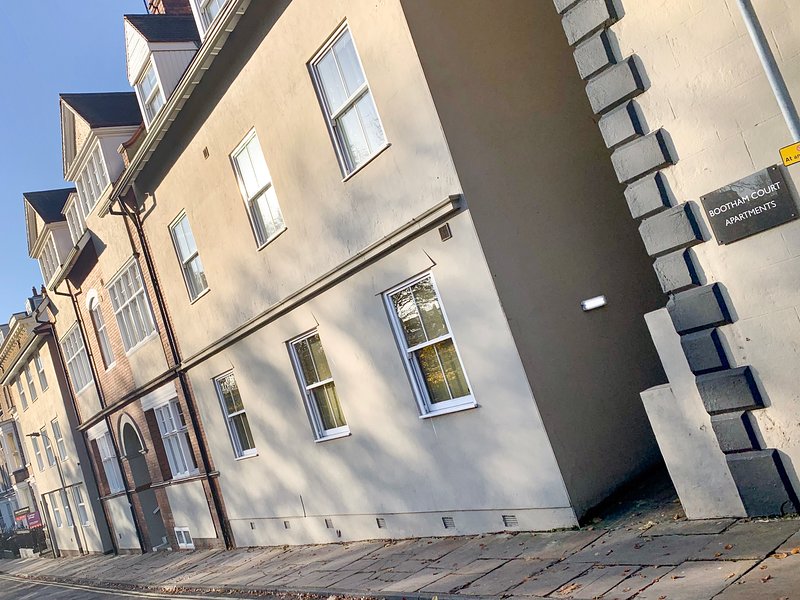 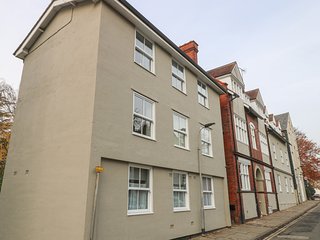 Very good - based on 7 reviews
Write a Review

HIGHLY RECOMMENDED. Our family are repeat visitors to Bootham bolt hole, enough said! Well ok, the reviews have to be a minimum 100 characters. Lol. Love the location. Short walk to the Minster/river and the sights of York. lovely apartment that our family of 4 always enjoy, the main bed is top quality and even the sofa bed is surprisingly good.

This has the usual holiday rental key safe, handy so not stuck to ridged check in/out times.

This property is as it says in the description, nestled in a quiet backwater, has a free off street reserved parking bay. We have stayed in other flats in York but we have found them noisy if right in the centre and parking was up to £12 per 24hrs so adds up over the week also you have to drive round looking for a space. Not a worry with the bolt hole.

I know this is the owners actual holiday home, we find that reassuring as they would want everything to be just right for when they stay. A genuine home from home. The fixtures are all good quality and are clearly expensive, (I love the wardrobe), the TV is a large curved screen Samsung smart internet type. Good for Netflix. The dinning set is the trendy industrial style.

The bathroom is gorgeous and the shower is amazing.

The owners have always been very approachable, friendly & happy to give recommendations etc. Their advice to visit Helmsley, Sutton bank, Goathland and Whitby was spot on.

We definitely highly recommend & do so to our Friends & family. We are already booked again for our next trip. Now that’s enough said!

Date of stay: December 2017
Was this review helpful? Yes
This review is the subjective opinion of a TripAdvisor member and not of TripAdvisor LLC
Problem with this review? Thank you. We appreciate your input.

The Bolt Hole is 10 min walk from the City Walls so there is no need for your car once you have parked up in the reserved space in the car park behind the building. From the moment we were greeted by the owners to leaving we could not fault the place. Janine and Chris explained everything to us and were a phone call away if needed. We didnt need them as it was perfect. The rooms are immaculate with everything we needed. Beds were comfortable. We used the day bed and pull out bed too which were more than adequate for us all and had excellent nights sleep. The shower was amazing. There was enough hot water for the four of us. We stayed for a week as we got married in the beautuful City and Janine and Chris made our stay extra special. This accommodation is so much nicer than a lot of Hotels and Bed & Breakfasts we have stayed in over the years in York and we have stayed in a lot. We hIghly recommend staying here. It is quiet, has everything you need and the perfect place to either just relax or take a walk into the City to sightsee. Thank you for having us. We will definately be booking another stay with you in 2018 ... hopefully our first Wedding Anniversary

Date of stay: August 2017
Would you recommend this hotel to a friend?   Yes.
Was this review helpful? Yes
This review is the subjective opinion of a TripAdvisor member and not of TripAdvisor LLC
Problem with this review? Thank you. We appreciate your input.

Central location with a 5 minute stroll through the museum gardens, river bank or Bootham to the centre of York. Easy check in/out with a key safe, awesome waterfall shower (i could stay in it all day), free allocated parking saves a fortune in York, very comfortable, classy, light and airy. Close enough to the attractions yet just tucked away in a peaceful leafy lane. No lift but only two flights of stairs so no problem for us. every thing you need, free tea & coffee, 40" smart TV, free wifi, comfortable beds. Highly recommended. One of the best self catering accommodation properties we've stayed in.

Date of stay: October 2017
Your age range 35-49
Would you recommend this hotel to a friend?   Yes.
Was this review helpful? Yes
This review is the subjective opinion of a TripAdvisor member and not of TripAdvisor LLC
Problem with this review? Thank you. We appreciate your input.

Bootham bolt hole is situated in a great location. It is decorated nicely, has a lovely view of the Minster, great shower and bright due to the large windows. I came to the bootham bolt hole to relax with my mother and daughter on holiday and to re charge from a stressful job. We accepted that it was a set up in the living room second bed, however, after one night on the camp bed my lower back ached. We realised that the bed was an occasional day bed and not geared up for a weeks sleep for an adult. (Perhaps for children). After two nights broken sleep, I felt very disappointed that my holiday would not provide what I would expect as a fundamental. Further to this, we were lucky to get two hot showers, leaving the third person to endure a cold shower in the morning. I am a keen runner and had planned to go running in the evening, followed by a shower but we soon realised that the hot water was not available the guest book said if it ran out "not to worry there will be plenty more in the morning!". (The apartment said it sleeps four but one of us endured a cold shower every day) this was on top of broken sleep from a below average bed. When I asked the owner to consider my views, he was defensive and suggested I should try a five star hotel! I think a good night sleep and a hot shower is a basic requirement even in basic hotels/apartments! I suggested that he changes his advertisement to a two bed apartment, which would be perfect for guests. As it stands it is all about making money and not about a guests comfortable holiday. Time that is precious and you can't get back. I didn't want any compensation (we were offered £50 off if we returned) but I wanted him to change his advert to two beds to save other guests from the same experience. I note nothing has changed. You will see from the pictures that we had nowhere to put our stuff, the type of bed I endured for a week, the guest book note about showers. The key safe is a nail breaker, the owner knows this, he said his wife breaks nails but yet he still thinks it's okay to offer that to guests. I think you get my point. Shame as it would otherwise be a great apartment.

Date of stay: April 2017
Was this review helpful? Yes
This review is the subjective opinion of a TripAdvisor member and not of TripAdvisor LLC
Problem with this review? Thank you. We appreciate your input.

We were met on arrival by the owner and his wife who showed us all around the apartment, they were very helpful and attentive, we only had to text or phone them and they would come if something was wrong. The apartment was ideally situated for visiting York - a 10 minute stroll to the walls one way and 10 minutes walk to the Railway Museum the other. No need to use the car at all.
The kitchen, lounge area was very light and bright - you could see the Minster from the front window. It was well fitted out with everything needed and had wifi. The bedroom had a very comfortable bed and the bathroom was superb. The only downside, if you are somewhat disable, is the two flights of stairs but we are two oaps and we managed fine.
Yes, we will definitely return.

Date of stay: February 2016
Liked best: The situation of the apartment
Liked least: The stairs
Travelling group: Spouse/Partner
Would you recommend this hotel to a friend?   Yes.
Recommended for:
Was this review helpful? Yes
This review is the subjective opinion of a TripAdvisor member and not of TripAdvisor LLC
Thank you ever so much for sharing your holiday experience with us all, we are so pleased that you had a lovely break! It is wonderful to hear that you had all that you needed at the property and enjoyed the look of the place, it sounds like it was a great base to explore all of York right on the doorstep - excellent! We certainly hope you return for another visit very soon!
This response is the subjective opinion of the management representative and not of TripAdvisor LLC
Problem with this review? Thank you. We appreciate your input.

Just spent a week at the Bootham Bolt Hole and loved it. Beautiful apartment just a short stroll from York Minster. The apartment has everything (and more) that you could want. Beautifully decorated and furnished with a fabulolus shower room.
The owners kept in touch via text and were very obliging and helpful, Lovely touch having christmas trimmings and a nice bottle of bubbly waiting for us on our arrival.

York is a superb city with so much to see, do, eat and drink. We cannot recommend this place highly enough

Date of stay: January 2016
Travelling group: Spouse/Partner
Would you recommend this hotel to a friend?   Yes.
Was this review helpful? Yes
This review is the subjective opinion of a TripAdvisor member and not of TripAdvisor LLC
It is so wonderful to hear that you had a great stay at Bootham Bolt Hole, and thank you ever so much for sharing your holiday experience with us. It sounds like the apartment suited you down to the ground - a comfortable place to stay (with some welcome goodies on top!) as well as a central location for taking in all that York has to offer - excellent! We certainly hope that you return again very soon.
This response is the subjective opinion of the management representative and not of TripAdvisor LLC
Problem with this review? Thank you. We appreciate your input.
Previous Next
1 2
Updating list...
Do you own a holiday rental? List it here.

Looking for a place to stay in York?
View all 398 holiday rentals