“Delightful stay two weeks before Christmas!”
eWhaXzE0Ml9ycjM=
other travellers have booked this property 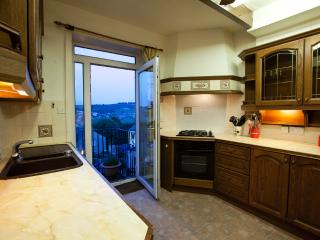 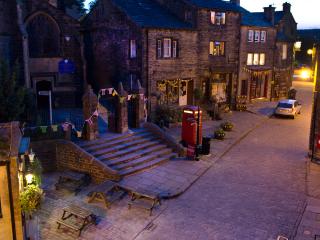 Very good - based on 53 reviews
Write a Review

You must stay in Haworth at Christmas time. We arrive at Keighley station a Santa train day. We got to interact with some children who were eagerly awaiting the Santa train while waiting for out quiet diesel to arrive. We arrived in Haworth to a procession of costumed me wearing bells. Then there were carolers at the steps of the church. When we left the pub where we had grabbed a quick meal, we heard organ music coming from the church.

This rental is ideally located for seeing Haworth, the Bronte museum, and the moors. The rental has a second bedroom for children. It was quite comfortable with full kitchen and living room downstairs and bedrooms above.

The view across the valley is lovely on a clear night.

Have already recommended it to a friend.

Date of stay: December 2015
Liked best: location
Liked least: This is not for people who can't climb challenging stairs.
Travelling group: Spouse/Partner
Your age range 50-64
Would you recommend this hotel to a friend?   Yes.
Recommended for:
Was this review helpful? Yes
This review is the subjective opinion of a TripAdvisor member and not of TripAdvisor LLC
Problem with this review? Thank you. We appreciate your input.

90 helpful votes
“Great location in centre of Haworth, well-equipped if a little dated”
Reviewed 11 December 2015 for a stay in November 2015
1
person found this review helpful

Stayed here for three nights in early November. Easy to find with parking in the Black Bull car park opposite. A great location for exploring the village and its attractions. The flat itself was clean and tidy, with a well-equipped kitchen. On the other hand, it is a little dated with old furnishings and carpets. The stairs inside are vertiginous and one of us slipped and came a cropper one morning. Best to go down them backwards! The apartment is pet-friendly and the owner, Jason, extremely helpful. In all, a nice stay despite the bruising from the fall.

Date of stay: November 2015
Liked best: Location at top of the Haworth main street
Liked least: Dated decor, dangerous stairs
Travelling group: Spouse/Partner
Would you recommend this hotel to a friend?   Yes.
Recommended for:
Was this review helpful? Yes
This review is the subjective opinion of a TripAdvisor member and not of TripAdvisor LLC
Problem with this review? Thank you. We appreciate your input.

Haworth is a beautiful historic village it's like stepping back in time with its vintage shops, old pubs and cobbled streets. We stayed here for two nights with our two young children. The cottage is ideally located on the main street above emma cafe. You get to the cottage via some steps at the back. There are two large bedrooms upstairs and a large bathroom, a well stocked kitchen downstairs a toilet study and living room. Only criticism we'd say is blinds or linings on curtains in the front bedroom as the light outside makes the room quite bright

Date of stay: October 2015
Was this review helpful? Yes
This review is the subjective opinion of a TripAdvisor member and not of TripAdvisor LLC
Problem with this review? Thank you. We appreciate your input.

This apartment is in an excellent location. Extremely good value for money. Front bedroom quite light due to pub directly opposite so if u prefer dark room sleep in the back bedroom. Haworth lovely place to visit. Owner very friendly , thank you Jason. Would definately return.

Date of stay: October 2015
Travelling group: Spouse/Partner
Would you recommend this hotel to a friend?   Yes.
Was this review helpful? Yes
This review is the subjective opinion of a TripAdvisor member and not of TripAdvisor LLC
Problem with this review? Thank you. We appreciate your input.

Great location, everything you could wish for in the apartment. thanks to the staff at Emma,s café for the keys and advice.We will be coming back again Great apartment Jason Thanks Martin

Date of stay: September 2015
Travelling group: Friends
Your age range 50-64
Would you recommend this hotel to a friend?   Yes.
Was this review helpful? Yes
This review is the subjective opinion of a TripAdvisor member and not of TripAdvisor LLC
Problem with this review? Thank you. We appreciate your input.

We arrived 5 hours later than expected, but Jason organised someone to handover the keys, agree with the Landlord of the Black Bull that we could park in their car park as we couldn't fit through the gateway to the allocated parking and helped us unload the car.
The apartment itself was neat and clean, the rooms were just as nice as the photos, the views from the back (over the valley and hills the other side) and the front - The Black Bull and the church were both lovely.
The week we stayed was warm so we had the windows open, which was a small issue on the Friday night as there was a band at the pub, but once the band finished at around 23:00, the 'patrons' left quite quickly and quietly.
We would definitely stay there again.
As previously stated in other reviews, this apartment would not be suitable for people with limited mobility as the access is up a fire exit, external metal stairs, but anyone who is capable of stairs, there wouldn't be an issue.

Date of stay: August 2015
Travelling group: Extended Family
Would you recommend this hotel to a friend?   Yes.
Recommended for:
Was this review helpful? Yes
This review is the subjective opinion of a TripAdvisor member and not of TripAdvisor LLC
Problem with this review? Thank you. We appreciate your input.

11 helpful votes
“May be "Prime location" but in no way prime rental!”
Reviewed 1 September 2015 for a stay in August 2015
3
people found this review helpful

Let me start by saying this apartment is definitely in a great location however this is where it starts to go down hill. You have to enter the property from the back by a flimsy metal fire escape, when entering the property you are hit with a damp fusty smell. The apartment is dark and in no way welcoming, the carpet in the bedrooms is dirty and wrinkled, everything is shabby, heating doesn't work, Internet access is non existent and to be honest I didn't even stay they night never mind the two nights that I'd booked. I booked a hotel elsewhere. We were horrified, the photos on trip advisor are definitely rose tinted. The owner/ agent was contacted to let him know this apartment didn't suit our needs and his reply was , he was sorry to hear that, no offer of part refund at the least. I am so shocked this place is even on trip advisor my advise is go elsewhere if your in anyway fussy about a comfortable environment. I know Haworth is known for being a Victorian village but this apartment needs brought into the 21st century fast!!! A Very disappointed trip advisor customer!!!

Date of stay: August 2015
Liked best: Closing the door on the way out
Liked least: The shabby decor and death trap access to the apartment
Travelling group: Extended Family
Would you recommend this hotel to a friend?   No.
Was this review helpful? Yes
This review is the subjective opinion of a TripAdvisor member and not of TripAdvisor LLC
In response to your ridiculous review firstly the fire escape is a very solid structure installed by professionals. The internet connection works perfectly and nobody else has ever complained about it apart from you. There was a small problem with the central heating boiler which has now been repaired. If you had called me I would have had the boiler sorted out immediately. Nobody else has complained about a damp smell either. I urge anybody wishing to stay at this apartment to ignore this slanderous review which I believe was written by competitors. Please read all the other reviews which offer a correct perspective.
This response is the subjective opinion of the management representative and not of TripAdvisor LLC
Problem with this review? Thank you. We appreciate your input.
Previous Next
1 2 3 4 5 6 … 9
Updating list...
Do you own a holiday rental? List it here.

Looking for a place to stay in Haworth?
View all 67 holiday rentals