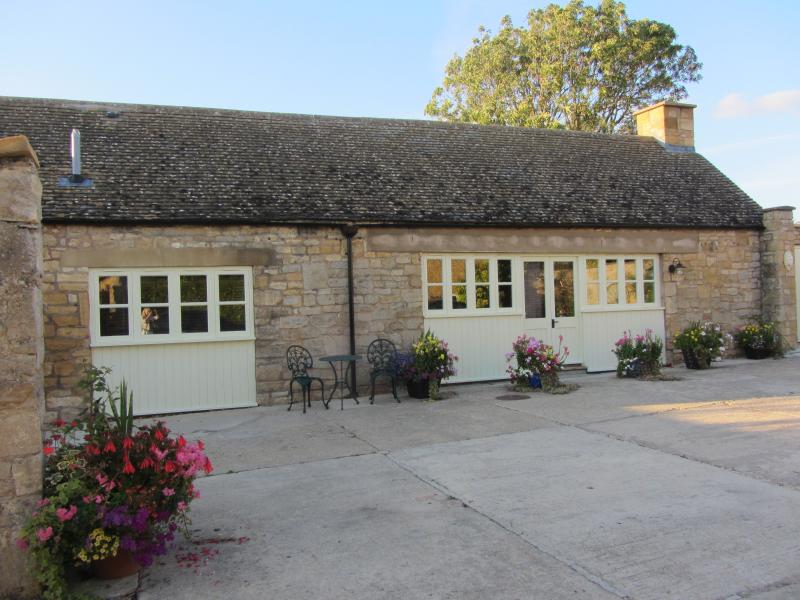 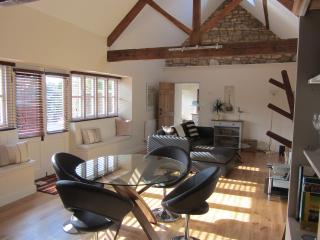 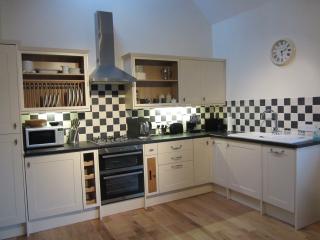 Excellent - based on 14 reviews
Write a Review

Starting with the downside: there's a lot of traffic noise just over the garden wall on the A44, and though it lessens overnight, it doesn't seem to stop. It's not excessive, I'd rate it at 3/10.
On the plus side, it is warm and comfortable, and supplied with a comprehensive 'entertainment' zone: Sky+ HD, DAB radio and a better-than-average CD player, which between them also allow you to play your iPod or music stored on a USB memory stick. There's also a DVD player, which, with the Sky box, is connected to a Sony Bravia TV.
Apart from the gas-fired central heating, there is a 'fire feature' which appears to be burning logs, but is an illusion, warmth being provided by a fan heater built into it. There is a second, powerful, fan heater (again built-in) at the kitchen end of the large living room.
The kitchen itself contains a fridge (no ice-making compartment), a gas hob and electric double oven, and a one and a half sink unit fed by a mixer tap. The tap has been plumbed in the unconventional way of hot on the right, cold on the left, but as long as you remember which is which... There is a small microwave cooker, but no microwave cookware.
Waste bins are provided for landfill and 'food waste' (in a container labelled 'compost'), but while there was guidance in where to dump landfill and bottles, there was none relating to food waste or paper and card. Perhaps this will be remedied in time.
The bedroom was pleasantly spacious, with a double bed, supplied with a firm mattress and a couple of pillows each. The Duvet was probably 13.5 tog, but could have been more - we're used to ours at home which is 4.5 tog. We never felt cold, but in the middle of the night could wake up very warm!
The shower-room and toilet was fine. The loo had a tendency to overfill and spend a few minutes dumping excess water down the drain, but otherwise, the room worked well. The shower was easy to control.
We would have liked a change of towels to be available, including towels for use in the kitchen. We had to use a bathroom hand-towel in the kitchen, and after a week, it could have done with being changed!
Apart from a chance meeting with Mike, Sonia's husband, we didn't actually meet our land-lady at all. The keys were handed over by means of a key safe, whose code is notified to hirers in advance, along with clear instructions, and returned the same way.
The site is well-maintained, and the location is convenient for Broadway and Evesham (where there is a Tesco, with fuel station, and Aldi) and there are many excellent gastro-pubs within a short distance, serving up excellent lunches and dinners. There are several tourist attractions within easy travelling distance - e.g. Broadway Tower, the Gloucestershire Warwickshire Railway (I always thought 'GWR' stood for a different organisation), and Stratford-upon-Avon, to name but three.

Date of stay: August 2014
Travelling group: Spouse/Partner
Your age range 65+
Would you recommend this hotel to a friend?   Yes.
Recommended for:
Was this review helpful? Yes
This review is the subjective opinion of a TripAdvisor member and not of TripAdvisor LLC
Problem with this review? Thank you. We appreciate your input.

A wonderful property in a lovely location. Beautifully decorated, furnished and so cosy. We had such a wonderful stay and we didn't want to leave. We will definitely be returning in the near future.

Date of stay: May 2014
Travelling group: Spouse/Partner
Would you recommend this hotel to a friend?   Yes.
Was this review helpful? Yes
This review is the subjective opinion of a TripAdvisor member and not of TripAdvisor LLC
Problem with this review? Thank you. We appreciate your input.

We spent Valentine's weekend in White Chapel Farm Barn. The barn is spacious warm and cosy with all mod con's. The little extra's like a bottle of wine in the fridge, tea and sugar in the cupboard, a rug on the sofa all make this barn extra special. Thank you Sonia and Mike for a lovely weekend despite the horrendous wind and rain!

Date of stay: February 2014
Travelling group: Spouse/Partner
Would you recommend this hotel to a friend?   Yes.
Was this review helpful? Yes
This review is the subjective opinion of a TripAdvisor member and not of TripAdvisor LLC
Problem with this review? Thank you. We appreciate your input.

Stayed here for only 2 nights but wished we had stayed longer to enjoy the barn to its fullest.
The owners have thought of everything including BBQ and private garden area for occupiers sole use. Sadly we didnt get to sample these.
The Barn is pristine, furnished to a high standard in a very modern and pleasing manner.
It is central for Getting to wherever you want to head to and very private and secure.
The owners have thought of everything and the Barn is fully fitted with Sky, a docking station, full kitchen. All beautifully done and colour coded.
Our only gripe would be there was no freezer box and the barn was a little warm on an evening but open windows did the trick, however, this was down to the glorious weather.

We made a decision when we return to the area we will most definitely stay at White Chapel again, just longer next time.

Thanks to Sonia & Mike also for the lovely cold bottle in the fridge on arrival which was a nice surprise and a lovely treat.

Date of stay: July 2013
Liked best: Quality and Cleanliness of the accomodation
Liked least: No freezerbox
Travelling group: Spouse/Partner
Would you recommend this hotel to a friend?   Yes.
Was this review helpful? Yes
This review is the subjective opinion of a TripAdvisor member and not of TripAdvisor LLC
Problem with this review? Thank you. We appreciate your input.
Previous Next
1 2 3
Updating list...
Do you own a holiday rental? List it here.

Looking for a place to stay in Broadway?
View all 61 holiday rentals