Review of Designer modern apartment with a view ! 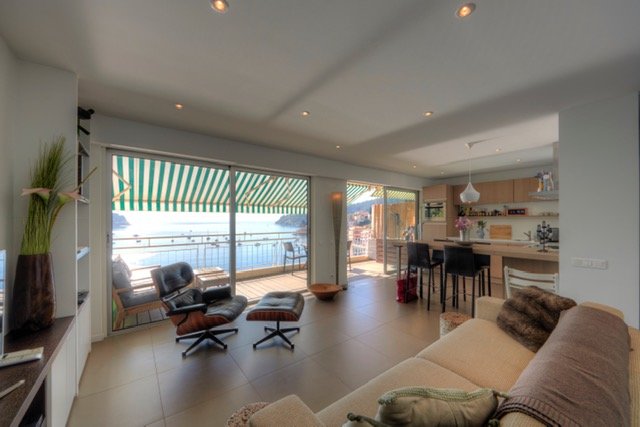 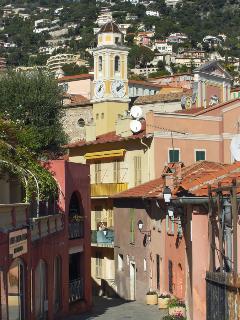 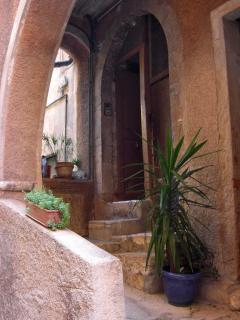 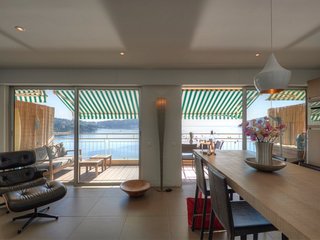 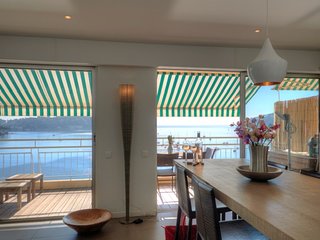 Excellent - based on 23 reviews
Write a Review

2 helpful votes
“Excellent location, beautiful apartment, fantastic hosts!”
Reviewed 31 May 2013 for a stay in May 2013
2
people found this review helpful

One of several apartments in Le Neptune building, ours had recently been refurbished to a very high standard with all mod-cons and everything you need for a comfortable and relaxing holiday. The apartment managers, George and Pat, could not have been more helpful - George even went to Nice Airport to collect my husband's lost luggage two days after we arrived (which had been on its own holiday to Naples courtesy of British Airways!). The fridge had also been stocked with many essentials; the sparkling rosé wine was a welcome necessity after the lost luggage débacle!

The view from the balcony over Villefranche bay is stunning, as is Villefranche-Sur-Mer itself - a beautiful medieval village with many narrow back streets to explore. Had we not been in Villefranche for a particular reason, I would have been perfectly content to spend the day on the balcony's sun loungers reading a book. The apartment block itself is located right next to the train station, which, for us, was a bonus as we were travelling into Monaco most days for the Grand Prix (15 minutes on the train), and is also on a direct line for Nice (7 minutes), Antibes and Cannes. Although the trains run very regularly, and despite its proximity, we were not bothered by any noise from the station.

There are a couple of small beaches directly in front of the apartment block (go under the station subway and turn left down the steps), which also have a couple of snack bars - we had breakfast and lunch at the first one you come to, and it was very good. They cooked us omelettes for our breakfast even though they are not on the menu!

We enjoy playing tennis and managed to find municipal clay courts further along from the beach and up the hill. The cost was 30 euros for an hour, which included equipment hire (including tennis shoes - ordinary trainers are not allowed), but you have to buy a tin of balls for 8 euros if you don't take your own.

If you are holidaying in this area, a visit to Monaco is a must (even if you aren't an F1 fan). Go to Casino Square (the buildings are beautiful) and sit in Café de Paris and watch the world go by (take plenty of money with you though; a pint of lager is 15 euros, although a glass of wine is a very reasonable 6 euros 50 in comparison!). The Palace is also worth a visit.

We had a couple of very enjoyable meals in Le Serre in Villefranche. It is quite difficult to find as it is in the medieval back streets, but it worth finding. The restaurant has a traditional feel and a varied menu with the biggest selection of pizzas we have ever seen. It is also very good value for money (one of our meals for four with desserts, coffee and wine cost the same as a round of drinks and two sandwiches at Café de Paris!). Both nights we were there it was quite busy, so I would recommend booking.

All in all, a very enjoyable holiday (despite the lost luggage) and I can't wait to go back.

Date of stay: May 2013
Liked best: Everything!
Liked least: The fact we were only there for one week!
Travelling group: Other
Your age range 35-49
Would you recommend this hotel to a friend?   Yes.
Recommended for:
Was this review helpful? Yes
This review is the subjective opinion of a TripAdvisor member and not of TripAdvisor LLC
Problem with this review? Thank you. We appreciate your input.

2 helpful votes
“Perfect welcome, great apartment just a stones through from restaurants and transport.”
Reviewed 30 March 2013 for a stay in March 2013
2
people found this review helpful

Wonderful welcome to the perfect home from home. All mod cons, quiet and with a perfect view of the bay at Villefranche. Conveniently located for local transport along the coast and 5mins from a variety of great local restaurants in the town. Don't hesitate!

Date of stay: March 2013
Liked best: Warm welcome from Pat with generous food parcel to get us going
Liked least: no complaints
Travelling group: Extended Family
Would you recommend this hotel to a friend?   Yes.
Recommended for:
Was this review helpful? Yes
This review is the subjective opinion of a TripAdvisor member and not of TripAdvisor LLC
Problem with this review? Thank you. We appreciate your input.

Date of stay: November 2017
Was this review helpful? Yes
This review is the subjective opinion of a TripAdvisor member and not of TripAdvisor LLC
Problem with this review? Thank you. We appreciate your input.

Date of stay: March 2017
Was this review helpful? Yes
This review is the subjective opinion of a TripAdvisor member and not of TripAdvisor LLC
Problem with this review? Thank you. We appreciate your input.

Date of stay: April 2017
Your age range 35-49
Would you recommend this hotel to a friend?   Yes.
Was this review helpful? Yes
This review is the subjective opinion of a TripAdvisor member and not of TripAdvisor LLC
Problem with this review? Thank you. We appreciate your input.

Date of stay: February 2015
Travelling group: En famille avec adolescent(s)
Would you recommend this hotel to a friend?   Yes.
Was this review helpful? Yes
This review is the subjective opinion of a TripAdvisor member and not of TripAdvisor LLC
Problem with this review? Thank you. We appreciate your input.
Previous Next
1 2 3 4
Updating list...
Still can't find what you're looking for?

Looking for a place to stay in Villefranche-sur-Mer?
View all 165 holiday rentals