US$128
View deal
Free cancellation until 04/11/21
Eurostars Hotels
Orbitz.com
Hotels.comUS$137
View all 18 deals
Prices are provided by our partners, and reflect nightly room rates, including all taxes and fees known to our partners. Please see our partners for more details.
Payments made by partners impact the order of prices displayed. Room types may vary.
Sigríður S
Reykjavik, Iceland
11646

Stayed for 1 night after returning from a bicycle trip and since we arrived with a train late in the evening we needed a hotel that is close to the train station in Regensburg. The reason we we chose this hotel is its location and also because how quickly they responded to my emails when I was contacting them regarding a safe place to store bicycles. Check in was quick and everything ready. Room rather big but because of the central location of the hotel there was a bit of noise from outside. And there is no aircondition in the room but only a big fan close to the bed. Breakfast was excellent. More

Show less
Trip type: Travelled as a couple
See all 430 reviews
Payments made by partners impact the order of prices displayed. Room types may vary.
Nearby Hotels 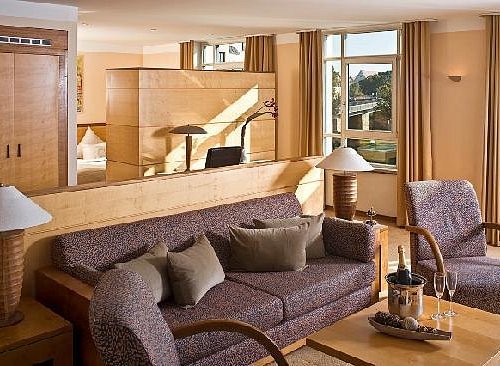 Expedia.com
View deal
Travelocity
eDreams
US$114
Hotels.com
View all 15 deals from US$114
151 reviews
1.0 miles from Eurostars Park Hotel Maximilian
We compared the lowest prices from 15 websites
Sponsored
Apollo Hotel
US$107

The Eurostars Park Hotel Maximilian in Regensburg was ideal for us, not only was it short walk to the old town but it also had an underground car park, which was suitable for the larger car. I believed the parking was chargeable but on checking out we were informed that we didn't have to pay, which was very kind of them.

The staff at check in were friendly. The bedroom was clean and comfortable and certainly on the large size. Thankfully we had a fan as it was hot in mid-June and there wasn't any air conditioning.

The WIFI was pretty good.

A buffet breakfast was included in our booking rate and had a reasonable selection of food.

Although we ate out locally each evening I was surprised that a hotel of this size, didn't have an onsite restaurant or bar

This review is the subjective opinion of a Tripadvisor member and not of TripAdvisor LLC.
KiwiRoadrunner
Auckland Central, New Zealand
187132
Reviewed 16 June 2019
Lovely character hotel in good location

Beautiful, large rooms filled with character and modern bathrooms. Very friendly service and nice breakfast included. Be aware that rooms do not have A/C but they provide fans. Due to the location, it can be noisy at night if you leave the windows open. They do have a car park below the hotel but it’s a tight squeeze so many people often park over the lines, resulting in a lack of availability. Overall though, it’s a good choice in Regensburg.

This review is the subjective opinion of a Tripadvisor member and not of TripAdvisor LLC.
norskies
Charlottesville, Virginia
1104439
Reviewed 6 June 2019
Nice location

This hotel has a central location at the end of a pedestrian street so it is possible to walk to shops, bars and restaurants. That is a good thing, because although they have parking below the hotel, I wouldn't want to be taking the car in and out. They reccomend that you take your baggage out on ground level, because you then have to drive your car down a winding, one way, passage down to the very limited underground parking area. They have a traffic light set up that is supposed to stop two cars from entering at the same time, but still it was a bit worrying. The check in was quick and pleasant. Our room was large, rather old fashioned, but nice enough. The bathroom was divided between 2 rooms, one with the sink, bidet and shower, and a second small room with the toilet and a tiny sink. The toilet room smelled of urine. Breakfast was included and was served in one of the fanciest breakfast rooms I have ever seen. The food was varied and good. All in all a good choice.

This review is the subjective opinion of a Tripadvisor member and not of TripAdvisor LLC.
walasan
Zurich, Switzerland
79
Reviewed 8 April 2019
It's ok.

We expected much more judging by the pictures.

The hotel has a very good service team and big rooms as well. But the hotel is now as it stayed behind like 30 years ago. We tried to use the "business center , and the computer was not even able to run a very up to date site. It was still running a prehistoric version of internet explorer... it was like the computer was last updated in 98' or 02'. It was kinda funny, but still very frustating. There are very nice people in the hotel giving their best and trying to make it work, we really liked them, but the place is just sad.

If you are a the old school type, go here, you will love it. But if you want a bit more modern touch (e.g. know how to use an Iphone) go somewhere else.

This review is the subjective opinion of a Tripadvisor member and not of TripAdvisor LLC.
ariel_998476
Las Pinas, Philippines
30489
Reviewed 29 March 2019 via mobile
Good business hotel in city center

Stayed for 2 weeks. Great location, walking distance to restaurants outside. Comfortable bed, clean room. Easy to transact front desk. Accesible to bus and train. There is taxi outside waiting close to the hotel.