US$127
View deal
Free cancellation until 03/11/21
Reserve now, pay at stay
Expedia.comUS$132
Agoda.com
Booking.com
View all 16 deals
Prices are provided by our partners, and reflect nightly room rates, including all taxes and fees known to our partners. Please see our partners for more details.
Payments made by partners impact the order of prices displayed. Room types may vary.
ASDLondon
Wanstead, United Kingdom
7996

This is a lovely hotel with an unusual artistic design. It looks small from the outside but the rooms are very spacious. The staff are friendly and very helpful. There is no htoel car park but if you park in the local car park then they will give you a token for €10 for your entire stay so that cost is pretty minimal. Most tourists that come here want to visit Neuschwanstein Castle, so the hotel will give you Fussen pass that will get you free bus ride to Hohenschwangau. When we were checking out, they let us leave our luggage in a secure locker until the afternoon when we returned. The breakfast (which was included in our hotel booking) was really nice. If you didn't have breakfast included then there is a large supermarket which is 5 minute walk away. Would definitely recommend.More

Show less
See all 1,927 reviews
Payments made by partners impact the order of prices displayed. Room types may vary.
Nearby Hotels 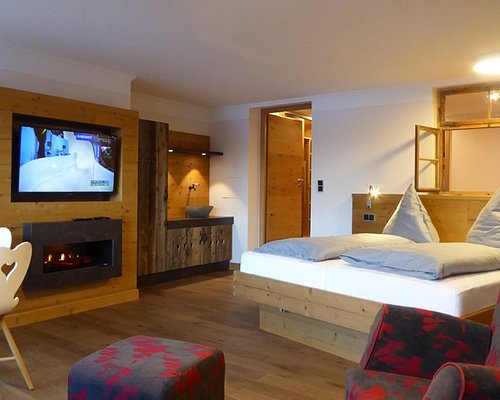 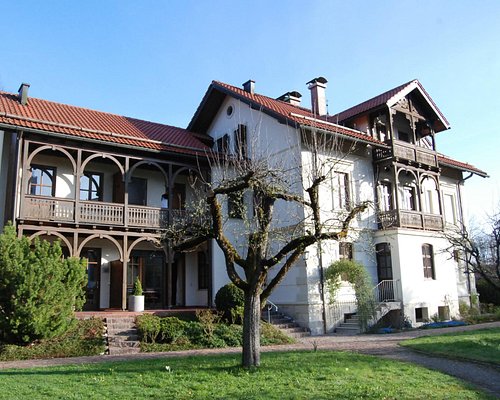 Expedia.com
View deal
Free cancellation
Reserve now, pay at stay
Agoda.com
US$92
Booking.com
US$92
Hotels.com
US$109
View all 15 deals from US$92
725 reviews
0.2 miles from Hotel Sonne
We compared the lowest prices from 15 websites 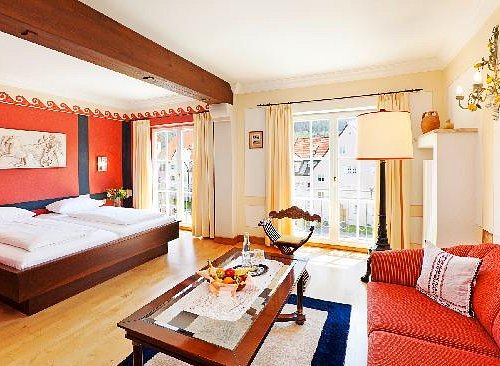 Located near the center of town, and thus offering convenient access to nearby shopping, Hotel Sonne offers comfortable accommodations plus a 24/7 gym at a fair price. Not luxurious, and lacking for parking due to construction during our visit, those not in need of a gym can certainly find better deals throughout town, though Sonne's offering of rooms large enough for four adults is noteworthy.

This review is the subjective opinion of a Tripadvisor member and not of TripAdvisor LLC.
123kaf
Philadelphia, PA USA
1522
Reviewed 1 June 2019
If you want a nice view beware of construction

Before arrival, the hotel did respond to my emails quickly. Staff were friendly, and rooms were very clean. The website does say they are renovating to improve their parking and restaurants so neither would be available. However, they never said anything about rooms having obstructed views/views of construction equipment, so I'd recommend asking about the exact room they are giving you before you book. When I'd emailed the hotel, I told them we were celebrating my parents' 50th wedding anniversary. I purposely booked them the Hohes Schloss room for its balcony and mountain and castle views. My Prinzregent Motto room was to have city views. The rooms were supposed to be approximately the same size. My room was huge, but my parents' room was much smaller. Their view was of construction equipment and scaffolding that was up against part of their balcony. My view was of other rooms, construction equipment and a wire fence with plastic plants hanging from it. I told the person at the front desk how disappointed I was - especially with my parents' room. They said they'd see what they could do. They never said another word to me. Instead, their solution was to put a $10 bottle of prosecco and some fruit in my parents' room, and they never checked back with us. While I appreciate the gesture, it was a poor way to handle the matter. I only got an apology and "we would've moved them if we could have" after I had to take the additional step of emailing the manager when I returned home. Only then did he offer a free night for our next stay. I explained it was a once-in-a-lifetime trip and we unfortunately could not use it. He would not even provide a discount for 1 of the rooms. In my opinion, it was handled very poorly.

Room tip: Ask where your room will be located in relation to the construction or you might be looking at a fence and construction equipment.
Ask 123kaf about Hotel Sonne
1  Thank 123kaf

This review is the subjective opinion of a Tripadvisor member and not of TripAdvisor LLC.
TravelLovers2
United States
416230
Reviewed 30 May 2019
Excellent in every way

Very friendly staff. They even recognized my husband's birthday when we checked out with a small gift. Very nice. The breakfast was wonderful.

Our room was very comfortable and we had a view to the pedestrian street. Great location and an easy walk to the train station.

This review is the subjective opinion of a Tripadvisor member and not of TripAdvisor LLC.
AJB722
Dayton, Ohio
4537
Reviewed 29 May 2019 via mobile
No pretensions

We visited this homey hotel in our travel through the Romantic Route in Bavaria. The hotel is run by his owner. A very friendly person. The rooms are ok, but nothing great. The Wife was not perfect in the rooms. The TV did work very well. The shower should be fantastic, but neither my wife or myself had the time to learn how to use it. I think you need a PhD in showers. The breakfast was ok, but was not as good as other we had in five hotels other hotels we stayed in our trip. Having said that the lady attending the breakfast area was very friendly and helpful. The location of the hotel is perfect. In summary we got what we expected.

This review is the subjective opinion of a Tripadvisor member and not of TripAdvisor LLC.
Anban P
Centurion, South Africa
5730
Reviewed 6 May 2019 via mobile
Great central stay

This hotel has great staff who are bilingual and willing to help. The staff made check in easy and provided a takeaway breakfast on the morning of a rather early check out. The hotel is very neat and central. It will be even better when the current renovations are completed