“Fantastic”
cWdMXzkwX0FxcA==
other travellers have booked this property 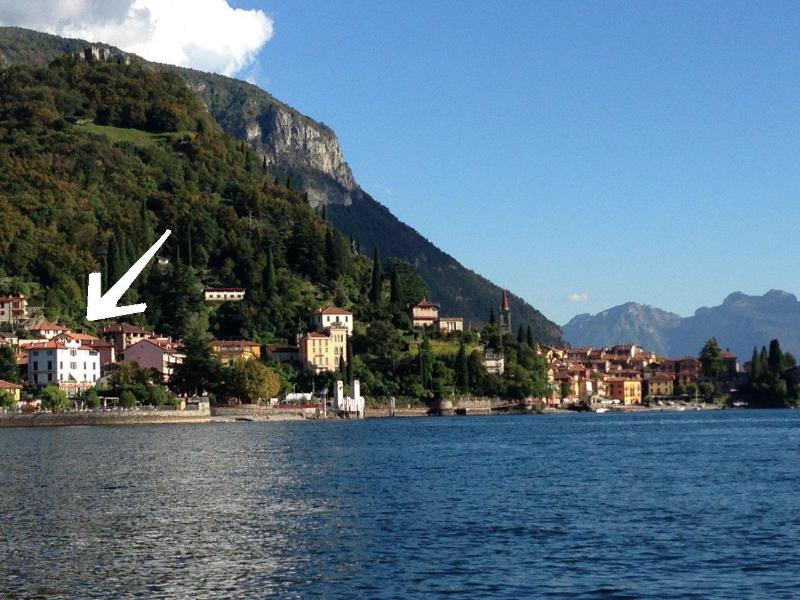 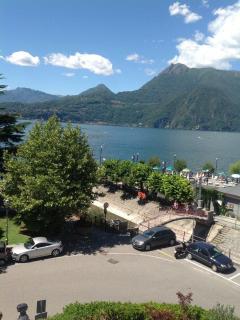 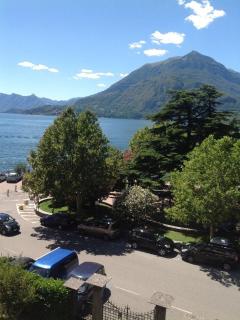 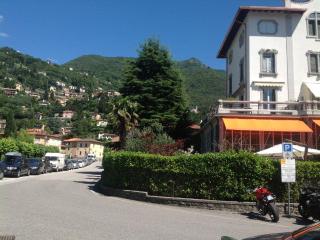 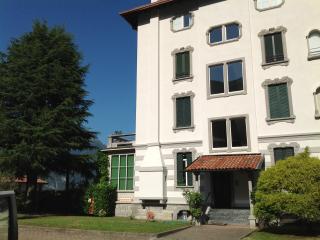 Very good - based on 58 reviews
Write a Review

Our stay at Varenna was just perfect from the moment we arrive at the train station and Andrea's mom was there to greet us, she was charming speaks very little English but enough to get by she offered us to drive us to the apartment which was 3 min away by car, came up with us, ( there is no elevator and is in the third floor , but who doesn't walk when in Italy ? .. So it was ok with us ... We arrive at the apartment and she had a welcome gift for us , a precious towel that said welcome to lake commo , great touch .. Show us around and the apartment was great just like you see in the picture it was late at night, so we couldn't see the view, until the next morning and it is just stunning , from every window in the apartment you can see the lake and the mountains is just beautiful. The kitchen is well equipped and
The room big enough, the shower a little on the small side but the bathroom was big , the only negative is that there is no wifi, spoke to the owner and he said he is in the process of getting it. The location is wonderful too just walk downstairs and at 2 min is the ferry station that takes you to the other towns around the lake, we got a ticket for a day is better that way and went to Menaggio and Bellagio this last one you can't miss it , is just beautiful we had lunch there and did a little shopping , we also went to Cadenabia and Lecco. Apart from that when you get back to Varenna, is just a 5 minute walk to restaurants by the lake and a 3 min walk to go to the town of Varenna and the piazza, the church and some hotels, is really beautiful , the food very good , and don't forget to go in the afternoon for an appetitive and sit on the terrace of the Hotel Du Lac the view is incredible and the service too, the server is a British woman very lovely and just don't forget to try the Aperol Spritz, with the little sandwiches that they serve is delicious . Overall it was a great experience. At the end Andrea's mom came to take us to the train station.... Love the woman so beautiful and elegant . Would definitely go again.

Date of stay: April 2014
Liked best: The views, and the location
Liked least: No wifi :(
Travelling group: Teenagers
Your age range 50-64
Would you recommend this hotel to a friend?   Yes.
Recommended for:
Was this review helpful? Yes
This review is the subjective opinion of a TripAdvisor member and not of TripAdvisor LLC
Problem with this review? Thank you. We appreciate your input.

Singapore, Singapore
Reviewed 30 April 2014 for a stay in April 2014
1
person found this review helpful
Date of stay: April 2014
Liked best: Location and car parking
Liked least: Shower was really small and no wifi
Travelling group: Spouse/Partner
Your age range 35-49
Would you recommend this hotel to a friend?   Yes.
Recommended for:
Was this review helpful? Yes
This review is the subjective opinion of an individual traveller and not of TripAdvisor LLC nor of its partners.
Problem with this review? Thank you. We appreciate your input.

Thank you Andrea for letting us stay in your lovely apartment. We were met at the train station by a lovely lady, Christina, who took drove us to the apartment, ( although we walked back to the station on our departure, only took 6 or 7 mins) Great apartment in Varrena on the edge of the lake. Good size bathroom with shower, and very comfy double bed room. We were four adults staying for just 2 nights, therefore the sofa beds were fine, but wouldn't want to sleep on them for a week, they would be fine for kids. No lift in the building, but the two flights of stairs weren't a problem for us. The views were fantastic with two windows opening on to the view of the lake. Excellent value for money, would definitely stay here again. We loved lake Como

Date of stay: April 2014
Liked best: The lake side views
Liked least: Not ideal for elderly or people with disabilites as no lift, other than that great litttle apartment
Travelling group: Friends
Your age range 50-64
Would you recommend this hotel to a friend?   Yes.
Was this review helpful? Yes
This review is the subjective opinion of a TripAdvisor member and not of TripAdvisor LLC
Problem with this review? Thank you. We appreciate your input.

We just completed a three-night stay at Appa Varenna with our two elementary-aged children. We couldn't have been happier! The location of the apartment is perfect -- right in front of the lido (public beach), very close to the beginning of the passarella. In 5 minutes, you are in the heart of Varenna, either on the lake or up in the piazza. It's close enough that going back and forth several times a day is very convenient, but you feel a little removed when you want some peace and quiet.

As for the apartment itself, it was actually much nicer than we expected. Everything seemed to be new and was done the way you would do it for yourself, not just for a rental. The separate bedroom with a queen-sized bed was very comfortable and had plenty of room in the closets for us to unpack. The bed seemed new and was not lumpy at all, though it did have that furrow in the middle where the two sides of the mattress come together, as most queen/king beds in Europe seem to. The kids slept on fold-out couch/chairs, which they reported to be quite comfortable as well. The bathroom was large with a great shower with plentiful hot water and great water pressure. A generous quantity of thick white towels, plus orange towels (presumably for the lake) were provided.

The view, which was the reason we chose this apartment, was just like in the pictures, except it looks better in real life. The apartment building is on the lakefront, though it's set back a tiny bit from the road. All three windows (two on different walls in the living/dining/kitchen and one in the bedroom) have amazing, beautiful lake views. The bathroom window has a gorgeous view up the hillside.

Andrea and his mom, Mary, were wonderful to deal with. There was a train strike the night we arrived, so we ended up taking a taxi and not arriving until 11:30 pm, but Mary cheerfully met us at the apartment anyway. Andrea and Mary were also very helpful in navigating other little issues that came up, such as figuring out how to work the hot water heater (tip: make sure the lever under the window in the dining area is inline with the pipe, then turn the water heater off & on).

We loved Varenna and did not want to leave "our" little apartment, even more so when we arrived in the Cinque Terre and saw our next room, which is a) smaller, b) not an apartment, c) nowhere near as nice, d) on a busy square, and e) costs more. Appa Varenna was a bargain, and we can't wait to return! Highly recommended for a couple, a family with two children, or four adults who don't mind being cozy.

Date of stay: April 2014
Liked best: Location, view, lovely apartment, owners
Liked least: No wi-fi
Travelling group: Young Children
Would you recommend this hotel to a friend?   Yes.
Recommended for:
Was this review helpful? Yes
This review is the subjective opinion of a TripAdvisor member and not of TripAdvisor LLC
Problem with this review? Thank you. We appreciate your input.

We spent 3 nights in this apartment. Aside for the fact that the mattresses were lumpy, everything about this apartment was great. We were 3 people and the apartment was quite roomy. It had all the facilities we needed. The view in every direction was amazing. The location was perfect - very close to both the ferry and the train station and a pleasant walk to the town center. it's a great place both for a quiet get-away and also hiking in the surrounding mountains (which we did). We found lots on information brochures in the apartment including maps which helped us plan our hikes. We arrived by ferry from Como and went back to Milan by train - all very convenient.
We can't wait to go back and spend more time in Varenna.

Date of stay: October 2013
Liked best: the location and the view
Liked least: the beds
Travelling group: Extended Family
Would you recommend this hotel to a friend?   Yes.
Recommended for:
Was this review helpful? Yes
This review is the subjective opinion of a TripAdvisor member and not of TripAdvisor LLC
Problem with this review? Thank you. We appreciate your input.

We arrived in Varenna by train after taking the Berina Express across the alps. We didn't want to take the boat across to the other towns on Lake Como after traveling all day, but most of Varenna was booked. We tried this apartment in Varenna and were so impressed! It was an easy 400 meter walk down hill from the train station with our luggage. The apartment is just like it was shown in the pictures. You open the windows and there were the views of Lake Como! Excellent. There is also gated parking should you drive to Varenna and need to park a car. The owner did everything to make our stay comfortable. We would stay here again. The only concerns is the apartment is on the 3rd floor and there is not a lift and the shower was small. But the views were large, and we came to Lake Como for the views. They were great, just like this place!

Date of stay: September 2013
Liked best: The location and the views
Liked least: Size of shower and no lift to third floor
Travelling group: Spouse/Partner
Would you recommend this hotel to a friend?   Yes.
Recommended for:
Was this review helpful? Yes
This review is the subjective opinion of a TripAdvisor member and not of TripAdvisor LLC
Problem with this review? Thank you. We appreciate your input.

Glasgow, United Kingdom
Reviewed 17 September 2013 for a stay in August 2013
2
people found this review helpful
Date of stay: August 2013
Liked best: The apartment itself was ideal for a couple and really clean.
Liked least: No corkscrew! :)
Travelling group: Spouse/Partner
Would you recommend this hotel to a friend?   Yes.
Was this review helpful? Yes
This review is the subjective opinion of an individual traveller and not of TripAdvisor LLC nor of its partners.
Problem with this review? Thank you. We appreciate your input.
Previous Next
1 … 6 7 8 9
Updating list...
Still can't find what you're looking for?

Looking for a place to stay in Varenna?
View all 115 holiday rentals