“Sardinia with Chelu Camper”
NmlXXzFfeXEz
other traveller has booked this property 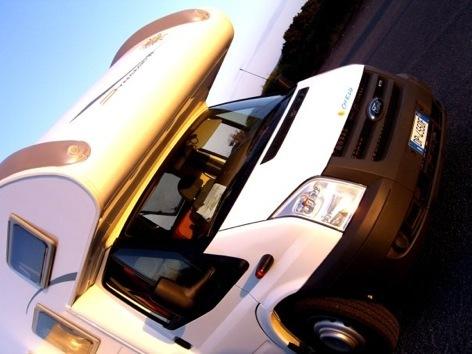 We rent a Chelu camper for three weeks in August with our two children. Barbara was very kind when she meet us at the airport and gave us all the instructions about the camper. The Camper was perfect with two double bed (one French bed), Bathroom, kitchen and tv.
We loved Sardinia and Chelu Camper!

Chelu told us the people that had rented the camper before would have broken the lock of the door and that Chelu had ordered a new lock which would though take 2 weeks to arrive.
Instead of repairing the lock correctly or waiting for the correct lock to arrive, Chelu installed a provisional lock.
As a result we continuously ran into difficulties trying to lock the door.
We had to slam the door with force until after 3 days it could not be locked at all anymore.

Not being able to lock the main door reliably was a major security issue.

We called Chelu and they sent Sandro from Chelu to our camp side. After he tried to manipulate the provisionally installed lock he left us with a screwdrive, with which we were supposed to manipulate the screws in order to make the door lock somehow.
Given these issues Sandro himself acknowledged that we should receive a discount and that he would bring this up with Barbara, the manager of the company.

Our mistake was to put up with the situation, instead of returning the camper immediately and charging the cost for a replacement or a hotel to Chelu.
For the entire 10 days of the rental we struggled with the door lock. If we could finally lock it we avoided using it, getting in and out using the front doors only.

When we returned the camper and asked for a discount, Chelu simply refused arguing that a discount would be impossible out of “administrative reasons”. On top of that Chelu was not even willing to take responsibility for the issue but argued that it was not their fault but the fault of the people that rented the camper before.

Furthermore we kept running in other issues: the radio stopped working after the first day and the kitchen drawers could not be locked correctly bumping out while driving. The whole interior of the camper made the impression of being cheap of lowest quality – especially given that the van apparently was very new.

This all left us with the impression that this company focusses on making money as fast as possible while not really caring about customer service and eventually being irresponsible renting out a camper without a proper door lock.
If the door cannot be locked they should have not rented the camper out in the first place and charge the cost to the people that broke the door.

All we were offered was a voucher of 100 EUR which we were supposed to use once we would rent again a camper Chelu.
We refused this offer because that very business conduct of Chelu is the very reason why we would never rent a camper again with them.

Chelu left very disappointed customers … This was the last time we rented with Chelu and we cannot recommend this company.

Date of stay: July 2017
Would you recommend this hotel to a friend?   No.
Was this review helpful? Yes
This review is the subjective opinion of a TripAdvisor member and not of TripAdvisor LLC
Problem with this review? Thank you. We appreciate your input.

Date of stay: August 2020
Was this review helpful? Yes
This review is the subjective opinion of a TripAdvisor member and not of TripAdvisor LLC
Problem with this review? Thank you. We appreciate your input.

Date of stay: August 2017
Would you recommend this hotel to a friend?   Yes.
Was this review helpful? Yes
This review is the subjective opinion of a TripAdvisor member and not of TripAdvisor LLC
Grazie per la tua recensione. Ti aspettiamo presto per un'altra avventura con i nostri camper
This response is the subjective opinion of the management representative and not of TripAdvisor LLC
Problem with this review? Thank you. We appreciate your input.
Previous Next
1 2
Updating list...
Still can't find what you're looking for?

Looking for a place to stay in Cagliari?
View all 265 holiday rentals