US$140
Free cancellation until 27/10/21
Reserve now, pay at stay
View deal
Booking.com
Priceline
Prices are provided by our partners, and reflect nightly room rates, including all taxes and fees known to our partners. Please see our partners for more details.
Payments made by partners impact the order of prices displayed. Room types may vary.
Swissair91
West London
3418

After a gap of many years we were able to spend a holiday at the Alpina and were delighted to see that the next generation are carrying on the tradition of excellent service with helpful, multi-lingual staff members. The hotel has basic but very clean and comfortable facilities, no frills, and most definitely the best location in Mürren with magnificent views down to the Lauterbrunnen Valley and across to the Eiger and Jungfrau. The dining room makes the most of the view and eating the great breakfasts here is a real treat. The lack of light pollution in Mürren makes star gazing on clear nights a magical experience. We cannot recommend this hotel highly enough.More

Show less
Room tip: Best views on valley side.
See all 438 reviews
Payments made by partners impact the order of prices displayed. Room types may vary.
Nearby Hotels 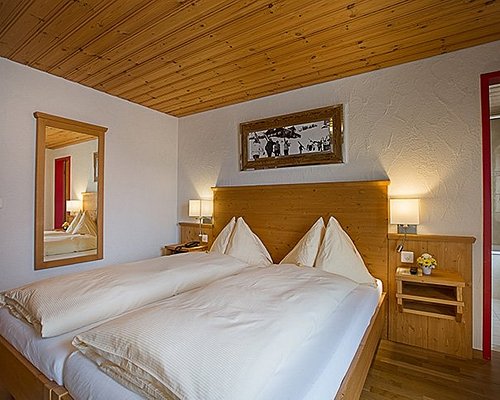 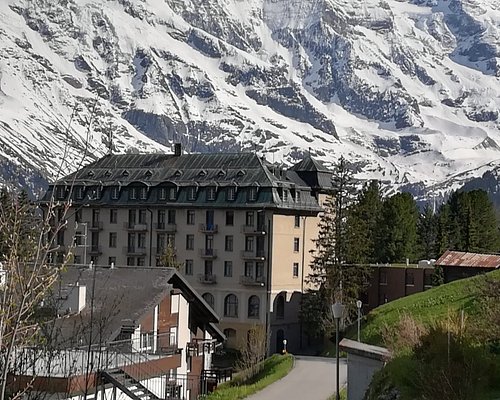 Alpina Hotel is a quite old hotel - a little worn out - but very clean and the view from the rooms is spectacular! The location is good - Murren is not a big village - and the hotel is located on the "village main-road".

This review is the subjective opinion of a Tripadvisor member and not of TripAdvisor LLC.
Deramus1
Virginia
4024
Reviewed 24 July 2017
Great Location and Great Views

This is a wonderful little hotel with nice rooms that overlook the valley and mountains beyond. The staff was very helpful, the breakfasts were typical European, and the little outside restaurant to the side of the hotel was fantastic.

This review is the subjective opinion of a Tripadvisor member and not of TripAdvisor LLC.
aspen5
Seattle, WA
229141
Reviewed 13 July 2017
Incredible location at a reasonable price

Small family-owned property looking over the Eiger, Monch and Jungfrau mountains. Incredible views from the balcony rooms, which are very reasonably priced. We had lunch and dinner most often at the hotel, which were excellent - rosti and fondue were the favorites. The local beer, Rugenbrau, is prominently featured. Breakfast was included with the room rate and was also very good - a wide selection of breads, yogurts and spreads were available and you can hard-boil or poach your own eggs. We never left hungry. The staff was very friendly and attentive. Our stay was most enjoyable.

This review is the subjective opinion of a Tripadvisor member and not of TripAdvisor LLC.
RileyB196
Winnetka, Illinois
3834
Reviewed 12 July 2017
The staff here are the best!!

Hotel Alpina is not a luxury hotel and the rooms are simple but the staff is what makes this place so special! They really go out of their way to make sure everything is okay for your stay. Our family of three stayed three nights here and we had booked a quad room, but were given two connecting rooms instead on the lower level, which we were honestly not crazy about as it was near the kitchen so it was hot and stuffy. It had a nice balcony with a table and chairs but overall it didn't feel like what we were expecting. In the morning, Agrapina asked me if our room was okay, and not wanting to be a complainer, I said it was fine, thanks. My husband though went later and had a gentle conversation with Roger, who immediately was concerned and was able to make a change for us. We were switched to another two-room suite on the fourth floor, and they even moved all our luggage for us (there is no lift here, so when we lugged our stuff back down the four flights, we really appreciated this gesture). The upstairs suite was perfect for us and had a big balcony with the most spectacular view. The whole place has a spectacular view, but this suite was really wonderful. Later, both Agrapina and Roger asked us if the new rooms were okay and said they were very thankful that my husband said something so that they could try to make it better for us and have happy guests rather than our not saying anything and being unsatisfied. We also ate in their restaurant multiple times for lunch and dinner and the staff there were fabulous as well. One gal and I had fun practicing language with each other - she in English with me and I in German with her (we ended up laughing a lot). The food was very good every time. They have a good selection on the menu too, with a nice mix of traditional Swiss and local items as as well as other non-Swiss items like spaghetti with veal meatballs (which my son ordered one night), and we saw several families with little kids there, so it's clear they welcome everyone. As another reviewer said, there is no pretentiousness here! Breakfast is included in the rate, and was a good selection of fresh pastries, breads, yogurts, cold meats and cheeses, etc. They had an egg boiler if you wanted to boil your own. Coffee and tea were also provided. I should also add that the entire place was spotlessly clean top to bottom all the time, no matter how busy it was. It's clear that the staff here really care about their guests and there is no question that we'd stay here again when we hopefully return someday. Thank you Agrapina and Roger!

This review is the subjective opinion of a Tripadvisor member and not of TripAdvisor LLC.
Donald M
nj
1418
Reviewed 11 July 2017
yes the hotel and views were great, but it's the friendly and helpful staff that really made the difference

Lets start with Roger - he was the key to my entire vacation, as he tirelessly answered questions not only about his hotel and Murren, but also surrounding hikes, hut to hut hikes, and more. in fact, we stayed for three nights, then left our luggage for 2 nights while we hiked to two mountain huts, then returned for one night (where he thankfully put us on a low floor, as my feet were shot). The breakfasts were outstanding, and we did the halfboard for two nights, and they even accommodated gluten-free. Agrapina was a constant delight, making sure the little things were handled, like tea in our room.

This review is the subjective opinion of a Tripadvisor member and not of TripAdvisor LLC.
View more reviews
PreviousNext
1…131415…
<script type='text/javascript' crossorigin='anonymous' async onerror='__scriptLoadError(this,true);' src='https://static.tacdn.