“Excellent, sad to leave”
a0N4XzM2X3Z0eA==
other travellers have booked this property 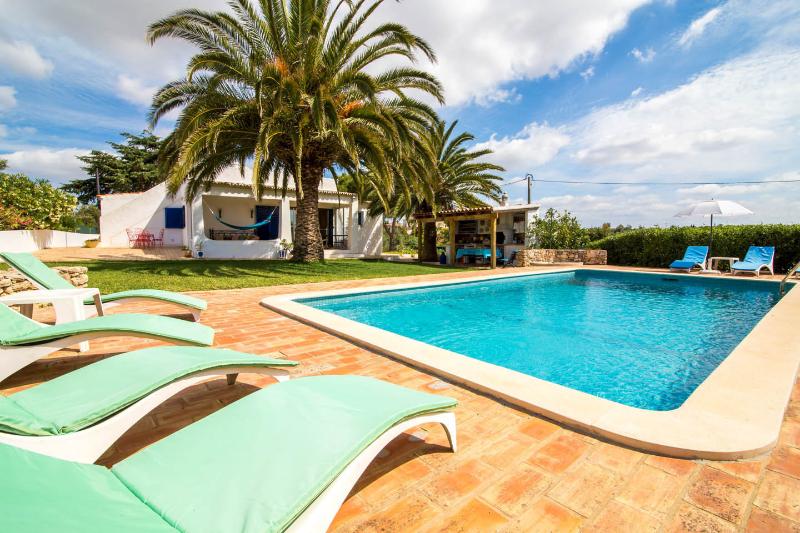 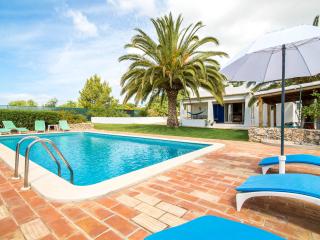 Very good - based on 20 reviews
Write a Review

Great villa, lots of space inside and out. Pool a good size and used all day every day we were at the villa. Amenities included a flat screen TV (with satellite but we couldn't find any English channels), DVD player, dishwasher, washing machine, books, magazines, movable wifi dongle (could access the Internet anywhere in the property including by the pool), outside kitchen and BBQ, pool inflatables, games, everything you need! We are a family of four including 13 and 9 year old daughters who both wanted to do different things, and this villa enabled them to do so. My husband could access the Internet for work and he also walked most of the coastal paths, my teenager slept and watched films, my youngest swam and played games, I read 5 books whilst drinking tea by the pool! It is situated down a couple of short single way tracks and the owner Fatima met us at the local Rocha Brava resort when we arrived at 11pm and we followed her to the villa in our hire car. We would not have found the villa by ourselves. Fatima is a great owner who was always on the end of the phone if we needed anything, and she came to clean at the end of the first week. The villa has great security with a small safe and a sold metal sliding gate at the end of the drive that can only be opened from the inside or with a key. The windows have lockable shutters and fly screens to allow air flow. We felt very safe. In fact we were very sad to leave and hope to go back. I would give 6 stars if I could.

Date of stay: August 2015
Liked best: Everything
Liked least: Old style can opener!
Travelling group: Other
Would you recommend this hotel to a friend?   Yes.
Recommended for:
Was this review helpful? Yes
This review is the subjective opinion of a Tripadvisor member and not of TripAdvisor LLC.
Problem with this review? Thank you. We appreciate your input.

3 helpful votes
“Lovelly Villa,Nice Pool,Private and Secluded but Hard to find”
Reviewed 12 July 2015 for a stay in July 2015

A lovelly Villa in a private and secluded spot.The pool is roughly 6 metres by 12 metres and has a deep end and a shallow end, the deep end is around 2 metres deep.
The villa contains everything you need and is roomy and clean.We stayed with our daughter who is 16 years old and she also liked the holiday.
Would we go back again,yes we would.We also had around 3 or 4 BBQ's and this area is great and well laid out.

If im going to be highly critical and I am because we would and probably will go back.We had temps of over 40 degrees and the villa would really benefit from the use of air conditioning.Their is also no fire exstinguisher on site which was a worry.And the villa is very hard to find,we didn't have a car and relied on taxis and most of the drivers did not know where the villa was.This is not so bad when you have your bearings but on first arrival the owner in my opinion could improve service by giving customers an actual map of where it is so customers can show their taxi drivers.
You don't have to have a car to enjoy a holiday here but it would be hugely beneficial.
A lovely Beach is about 30 mins walking distance.

Carvoeiro is not 30 mins away like in a previous review its is most definitely around a good 40 to 50 mins walk.A taxi to here is roughly 7 euros,dont walk it.

A good tip to get taxis is go to the reception near the local small supermarket which is about a 10 min walk.The reception for the rocha brava holiday resort is just round the corner from the supermarket and you can book and wait for taxis here in a nice cool reception.The local supermarket is quite pricey and has very little in the meat line but everything else.Instead go to the local intermarche which again is a 7 euro taxi ride away near lagoa.

Don't pack any bats and balls and airbeds as the villa has them.It also has wifi but it is very very slow and only good enough for browsing and reading nothing more.

The sprinklers do come on at ten pm but they keep to the lawned area and their no problem.There are a few mozzies but not to many but bring repellent.The dogs at the other villas you walk past down the dirt road to get to the villa are quite intimidating but at no point do you feel unsafe,they just make you jump a little at night lol.

All in all a lovely holiday and a nice villa,we have not returned to any holiday complex we have previously stayed at not because we are over fussy we just like to try somewhere different as you only live once !.But we may well come back here,esp if the owner pops in air conditioning.

Thx Fatima it was great and so were you,you kept in touch and answered everything.

P.s plz watch taxi drivers NOT the airport drop off ones the local ones there proper rip off merchants you have been warned.

Date of stay: July 2015
Liked best: The Pool
Liked least: trying to find the villa and the local taxi drivers ( airport taxi pick up was great )
Travelling group: Spouse/Partner
Your age range 35-49
Would you recommend this hotel to a friend?   Yes.
Recommended for:
Was this review helpful? Yes
This review is the subjective opinion of a Tripadvisor member and not of TripAdvisor LLC.
Problem with this review? Thank you. We appreciate your input.

We arrived late on a Sunday Maria met us which was a good idea full run down on the villa given and she kept in touch through out our stay.
Spacious and clean great pool , nice garden though got a shock at 10 as the sprinklers start and we forgot first ,soaking lol.the barbcue area is brilliant we had 4 whilst we stayed and intermarche is only 2 miles away with great selection and tons cheaper the England especially the butchers counter.
Bedrooms are okay but do bring mossie spray as Portugal not just this Villa gets a fair few .
This is a great place to relax nearest bar is a short walk and some of the adjoining villas have dogs which although when you walk past can be quite intimidating they are secure.
This is a great base with everything you need but Carvoeiro (beautiful) is 30 mins walk of 7 Euros cab away so a car is a must.Maria will assist in this as she will also help with cabs from the airport.
Overall verdict
Yes there are bigger more expensive villas but this one is great for a base would I go back yes I intend to as it had everything I needed.

Date of stay: June 2015
Travelling group: Friends
Would you recommend this hotel to a friend?   Yes.
Recommended for:
Was this review helpful? Yes
This review is the subjective opinion of a Tripadvisor member and not of TripAdvisor LLC.
Problem with this review? Thank you. We appreciate your input.

Beautiful villa near Carvoiero! It's really well equipped, with great pool, feels like home, great BBQ area. Really well equipped inside and has all you need!
Not far from great beaches, loved the bed and hammock on the patio.
Stayed with 2 young kids (3 and 9)

Date of stay: October 2014
Liked best: BBQ area, pool, cosy interior.
Travelling group: Young Children
Would you recommend this hotel to a friend?   Yes.
Recommended for:
Was this review helpful? Yes
This review is the subjective opinion of a Tripadvisor member and not of TripAdvisor LLC.
Problem with this review? Thank you. We appreciate your input.

Had a wonderful stay with four children aged 9 - 15. The house, pool and garden were clean in a semi rural setting, close to a fantastic beach (Carvalho) where we spent most of our time. The images reflect reality well.

We were looked after well, with a thorough clean half way through our holiday. It is clear that the owner takes care of this home.

One point to note - while there are fans in the house there is no air conditioning. This was not too much of an issue, however.

Date of stay: July 2014
Travelling group: Teenagers
Would you recommend this hotel to a friend?   Yes.
Was this review helpful? Yes
This review is the subjective opinion of a Tripadvisor member and not of TripAdvisor LLC.
Problem with this review? Thank you. We appreciate your input.

Date of stay: August 2019
Was this review helpful? Yes
This review is the subjective opinion of a Tripadvisor member and not of TripAdvisor LLC.
Problem with this review? Thank you. We appreciate your input.

Date of stay: August 2019
Was this review helpful? Yes
This review is the subjective opinion of a Tripadvisor member and not of TripAdvisor LLC.
Problem with this review? Thank you. We appreciate your input.
Previous Next
1 2 3 4
Updating list...
Still can't find what you're looking for?

Looking for a place to stay in Carvoeiro?
View all 406 holiday rentals