“We couldn't have asked for a better place to stay...”
M3VPXzRfbDEw
other travellers have booked this property 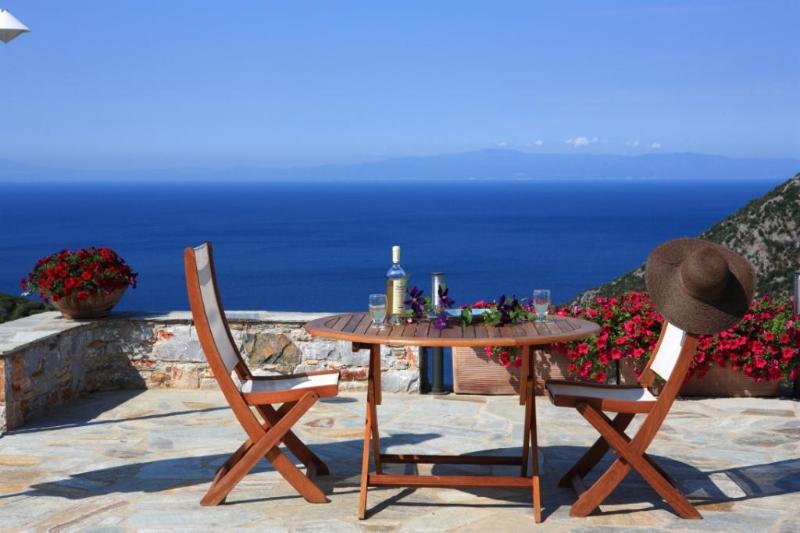 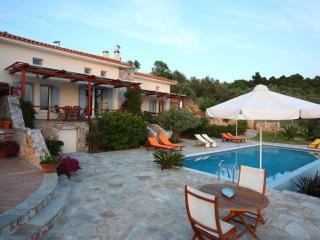 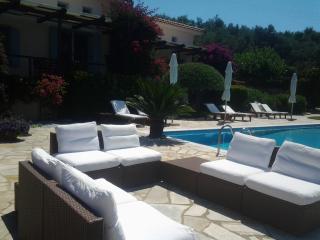 Excellent - based on 12 reviews
Write a Review

We were travelling as 2 families with teenagers and rented both Elies 1 and Elies 2 for a week. We could not have asked for a better place to stay. This is a rental where all the "Excellent" reviews are justified.

Elies is out of town (about a 10min drive) and hence tranquil and peaceful. It is situated just off the main road from Skopelos to Glossa, high up against the mountainside. It looks down onto Limnonari beach - one of the nicest beaches in Skopelos (if not THE nicest) and probably the best sandy (rather than peble) beach in Skopelos. The view from Elies is to die for and invites one to just stay at home and spend time on the patio and around the pool. Although the beach is near, it is not easily walkable and transport is recommended. The stip of coastline near Elies hosts some of the best beaches Skopelos has to offer and there is a boat rental not far away, to explore those beaches from the water (many, but not al, can be reched by car as well).

The propertie(s) is exceptionally well maintained and very clean. There was a daily cleaning service. The houses were both well equiped with all amenities we ever needed, except for a microwave oven. The beds & matresses seemed quite new and were of good quality and we slept very well. All windows were fitted with insect nets and insects were never any problem. The houses had both fans (ceiling and loose) as well as airconditioning.

The pool area was always spotless and had ample sun loungers and umbrellas. The garden was in immaculate condition and the overall picture it created as one looked out from your villa was really WOW - just as shown in the picures on the website.

Foula and Giorgos are wonderful hosts. They are VERY approachable, friendly and helpful (Giorgos speaks German, Foula English). We twice had transport problems and both times Foula and Giorgos were quick to (kindly) help us out. They live on the premises and are always available for questions or advice, but otherwise they keep their distance and you almost don't realise they are there.

Given a choice, I would choose Elies1 over Elies 2, simply because its patio walks directly onto the pool area, but this is a very marginal preference (Elies 2 has a bit of lawn next to it, with a larger barbeque area, to make up for the small inconvenience of a few extra steps to the pool).

If we ever get a chance to go back to Skopelos, I won't hesitate for a moment to book at Elies again.

Date of stay: July 2014
Liked best: The view, the peacefulness
Liked least: Leaving Elies
Travelling group: Teenagers
Would you recommend this hotel to a friend?   Yes.
Recommended for:
Was this review helpful? Yes
This review is the subjective opinion of a Tripadvisor member and not of TripAdvisor LLC.
Problem with this review? Thank you. We appreciate your input.

The photos, beautiful though they are, do not do justice to this place! Every detail of the amenities and decoration of the villa is carefully thought-out and every need supplied. Foula and George are perfect hosts, out of sight but there when needed. The temptation, with the beautiful pool and immaculate garden, is to stay on the property but some of the best beaches on the island are within 10 minutes drive...as are some great tavernas, cafes, beach bars...and Skopelos Town also only 10 minutes away. We stayed 4 days.....and wished it had been 4 weeks!

Date of stay: September 2013
Liked best: Opening the shutters in the morning......!
Liked least: Absolutely nothing.
Travelling group: Spouse/Partner
Would you recommend this hotel to a friend?   Yes.
Recommended for:
Was this review helpful? Yes
This review is the subjective opinion of a Tripadvisor member and not of TripAdvisor LLC.
Problem with this review? Thank you. We appreciate your input.

Staying at Elies house was an extraordinary an unforgettable experience. Everythin was perfect. Location was excelent, close to the beautiful beaches and shores of the southern part of the island, close to Skopelos town as well. The owners, Foula and George, made us feel like at home. Nice and hospitable all the time, they brought a delicious olive oil, olives and vegetables from their own harvest. They also provided with all kinds of information we needed. Before the trip (ferry connections, how to drive to the house and during our stay too. The house is perfect, confortable and clean with all you may need with really nice desing style. The pool and garden are just a dream and the views are breathtaking. We would repeat at once.

Date of stay: June 2013
Travelling group: Friends
Your age range 50-64
Would you recommend this hotel to a friend?   Yes.
Recommended for:
Was this review helpful? Yes
This review is the subjective opinion of a Tripadvisor member and not of TripAdvisor LLC.
Problem with this review? Thank you. We appreciate your input.

5 helpful votes
“EPITOMY OF HOSPITALITY, QUALITY AND PROFESSIONALISM”
Reviewed 26 August 2013 for a stay in August 2013
1
person found this review helpful

The place was perfect both as regards location and as regards facilities. The environment was extremely relaxing and the house nicely built and furbished will all necssary facilities to make our stay feel like home. The owners really indulge their tenants with their hospitality, great taste in everything they have chosen for the house and efforts to provide everything a guest would dream.
Excellent!! The place and the owners made us proud being residents of this beautiful country, greece. We strongly recommend it !!

Date of stay: August 2013
Liked best: the location and the flair of quality all over the place
Liked least: the proximity of the two adjoining villas
Travelling group: Young Children
Would you recommend this hotel to a friend?   Yes.
Recommended for:
Was this review helpful? Yes
This review is the subjective opinion of a Tripadvisor member and not of TripAdvisor LLC.
Problem with this review? Thank you. We appreciate your input.

Speechless. I came to this paradise's corner with my boyfriend and a couple of friends: I found the location great for a vacation and the owner totally delicious. The perfectest place to spend the best holiday (at the right price!!). Thank You!!

Date of stay: August 2013
Liked best: Everything
Liked least: Nothing
Travelling group: Spouse/Partner
Would you recommend this hotel to a friend?   Yes.
Recommended for:
Was this review helpful? Yes
This review is the subjective opinion of a Tripadvisor member and not of TripAdvisor LLC.
Problem with this review? Thank you. We appreciate your input.

Just returned from a great holliday. We have stayed there for almost two weeks and we have enjoined our stay every single minute. The villas are very well build, decorated with taste and equipped with everything you need. The pool is very clean and the water fantastic. It is very good if you could stay with friends in the next villa, so you can feel like you own the place.

Date of stay: July 2013
Would you recommend this hotel to a friend?   Yes.
Was this review helpful? Yes
This review is the subjective opinion of a Tripadvisor member and not of TripAdvisor LLC.
Problem with this review? Thank you. We appreciate your input.

Peregian Beach, Australia
Reviewed 22 July 2013 for a stay in July 2013
Date of stay: July 2013
Liked best: Villa and Location
Liked least: Nothing
Travelling group: Teenagers
Would you recommend this hotel to a friend?   Yes.
Recommended for:
Was this review helpful? Yes
This review is the subjective opinion of an individual traveller and not of TripAdvisor LLC nor of its partners.
Problem with this review? Thank you. We appreciate your input.
Previous Next
1 2 3
Updating list...
Do you own a holiday rental? List it here.

Looking for a place to stay in Skopelos?
View all 205 holiday rentals