Great family holiday for so many reasons - Review of Azure 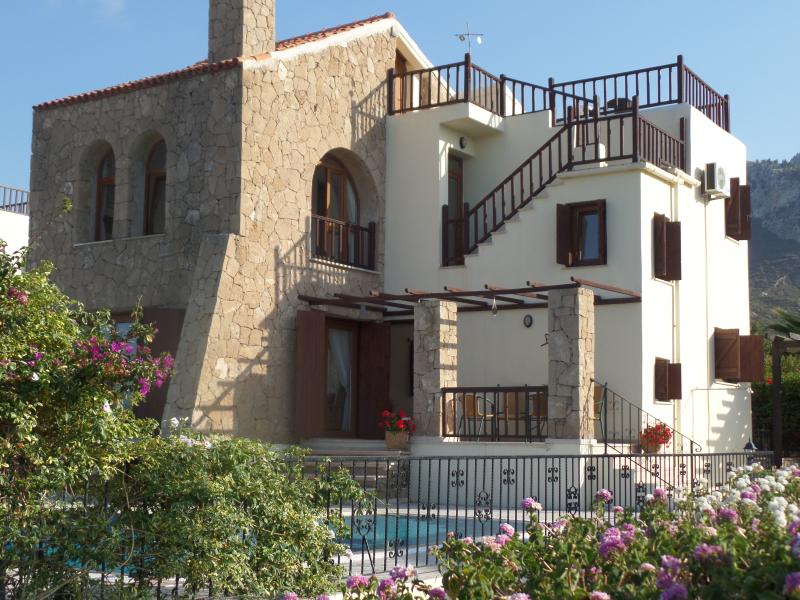 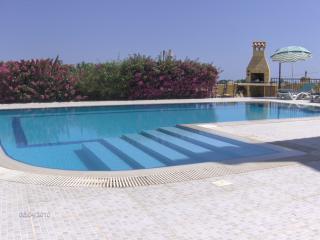 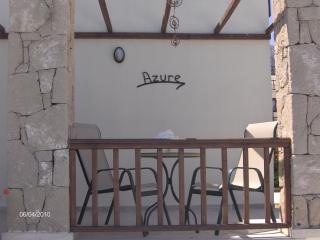 Excellent - based on 35 reviews
Write a Review

We had a fantastic time at Villa Azure. Our first holiday with the two children so initially a bit nervous, but the property is very secure. Our youngest would have been unable to 'escape' even if she wanted too once the drive-way gates were closed. The villa has a sensible open plan layout meaning only a couple of patio doors needed opening to ensure a refreshing movement of air. For our own peace of mind it was nice that all the bedrooms were upstairs and the door leading to the sun terrace on the roof was lockable.
The kitchen was incredibly well appointed, I even found a series of funnels to facilitate transfer of water from the large, more economic bottles, to the 1.5L bottles more suited to the fridge. I was astonished to find there were even clips to seal things like bags of flour and herbs. The fridge itself was capacious with a brilliant section for getting cans really cold. Nothing quite like an ice cold can of apricot juice in the midday heat!
There was a cupboard in the hall area that was a veritable treasure trove for the children, toys, buoyancy aids, snorkel, masks and more. The same area contained a very useful guide to the villa and a basket absolutely stuffed with information/maps/menus from facilities in the region.
The living room had a TV with built in DVD player which the kids used a couple of times during the very hottest of days. There is also a CD player and much to our delight an iPod dock. There was also a nice little selection of DVDs/CDs for when you needed a break from the sun or just a change from sipping a drink or two watching the sun seemingly slide down the mountain slopes to the sea.
Refuse was collected twice weekly!!! Sheets and towels were changed weekly along with a villa sweep/clean. The pool was cleaned twice a week and a tanker came twice to top up the water level.
Whilst the driveway could get really hot underfoot the yellow flagstones forming a walkway round the whole villa remained cool enough to walk bare-footed.
The villa is managed TRNC side by Sally Isak who also arranged our hire car and taxi transfers to and from Larnaca. Both airport journeys were very comfortable nothing like the 'bag and people squash' we have experienced elsewhere. All through the lead up to the holiday we were uncertain of final party size, but Sally was incredibly helpful in sourcing us the right sized vehicle despite us changing the 'right size' several times.
The villa location is in the foothills of the Kyrenia range of mountains (also called Pentadactylos / Besparmak, I think) so views in front, to the sides and behind the villa are spectacular. Supermarkets and eating establishments are a short drive away, but a car is essential anyway if you are to get the most out of the regions' eateries, views and landmarks.
In all respects it was an outstanding holiday and we were all genuinely sad to leave.

p.s. My wife asked me to mention there were excellent clothes washing facilities and apparently cleaned and ironed clothes filled the suitcases on the way home. The importance of this escapes me :)

Date of stay: August 2012
Liked best: Swimming pool
Liked least: Coming home
Travelling group: Young Children
Your age range 35-49
Would you recommend this hotel to a friend?   Yes.
Recommended for:
Was this review helpful? Yes
This review is the subjective opinion of a TripAdvisor member and not of TripAdvisor LLC
Problem with this review? Thank you. We appreciate your input.

Reviewed 27 August 2012 for a stay in June 2012
2
people found this review helpful
Date of stay: June 2012
Liked best: The swimming pool
Liked least: Nothing - it was all good
Travelling group: Spouse/Partner
Would you recommend this hotel to a friend?   Yes.
Recommended for:
Was this review helpful? Yes
This review is the subjective opinion of an individual traveller and not of TripAdvisor LLC nor of its partners.
Problem with this review? Thank you. We appreciate your input.

Villa Azure is a fantastic villa in a rural location but also very accessible to local supermarkets, restaurants and nearby villages. The villa is excellently equipped with plenty of crockery, cutlery and drinking glasses (often not found in rentals), there is an excellent BBQ/outside dining area and plenty of sun loungers around the pool side. Each of the rooms are light, tidy and with plenty of hanging space and hangers (also not often found in rentals) and the villa is generally of a high standard.
This is our 3rd visit and we will return.

Date of stay: July 2012
Liked best: We like the location
Liked least: There is nothing we don't like
Travelling group: Extended Family
Would you recommend this hotel to a friend?   Yes.
Recommended for:
Was this review helpful? Yes
This review is the subjective opinion of a TripAdvisor member and not of TripAdvisor LLC
Problem with this review? Thank you. We appreciate your input.

We stayed at this villa for two weeks at the beginning of September and were delighted to find that it was every bit as good as the information on the website led us to believe. Super villa, excellent location - out of the main town of Kyrenia but near enough to get there easily by car when required. Fabulous views and sunsets and plenty of excellent places to eat without having to go too far. Both the owners and manager were extremely helpful and we would certainly go back again. Thoroughly recommend it!

Date of stay: September 2011
Liked best: The whole place was excellent - lovely pool & good b-b-q
Liked least: Having to go home!
Travelling group: With Spouse/Partner
Would you recommend this hotel to a friend?   Yes.
Recommended for:
Was this review helpful? Yes
This review is the subjective opinion of a TripAdvisor member and not of TripAdvisor LLC
Problem with this review? Thank you. We appreciate your input.

Durham, United Kingdom
Reviewed 6 September 2011 for a stay in August 2011
Date of stay: August 2011
Liked best: watching the sunset ( it is beautiful to watch)
Liked least: having to return home
Travelling group: Family with Young Children
Would you recommend this hotel to a friend?   Yes.
Recommended for:
Was this review helpful? Yes
This review is the subjective opinion of an individual traveller and not of TripAdvisor LLC nor of its partners.
Problem with this review? Thank you. We appreciate your input.

Thatcham, United Kingdom
Reviewed 18 August 2011 for a stay in August 2011
Date of stay: August 2011
Liked best: Location
Liked least: Nothing
Travelling group: Family with Teenagers
Your age range 35-49
Would you recommend this hotel to a friend?   Yes.
Recommended for:
Was this review helpful? Yes
This review is the subjective opinion of an individual traveller and not of TripAdvisor LLC nor of its partners.
Problem with this review? Thank you. We appreciate your input.

This villa is perfectly situated ,with stunning views on all sides, for those who want a quiet location to relax in yet have plenty of places to visit around about. There is so much to see in this area but you definitely need a car to get around. If you like good food there are many cafes and restaurants avaiable and the prices range from cheap[Has, Rafters,Canli Balik]] to reasonable by Uk standards [ The House , No14 in Kyrenia].There are some quiet,clean beaches nearby with excellent swimming.My favourite is Alagadi. Try the Valley View restaurant for lunch [on the main road]. If you have time a trip to the Kar Paz National Park is wonderful and even better if you can stay over in the village at Dip Kar Paz [Arch Cottages]. The Manolyam Restaurant is an experience not to be missed.Finally visit Bellapais Abbey at night .This is the perfect backdrop for a romantic dinner .Both the Kybele and the Bellapais Gardens are highly recommended.Don't miss out of the castle at Kyrenia .It is very interesting and you get the best views of the harbour from here.

Date of stay: June 2011
Travelling group: With Spouse/Partner
Your age range 50-64
Would you recommend this hotel to a friend?   Yes.
Recommended for:
Was this review helpful? Yes
This review is the subjective opinion of a TripAdvisor member and not of TripAdvisor LLC
Problem with this review? Thank you. We appreciate your input.
Previous Next
1 2 3 4 5
Updating list...
Still can't find what you're looking for?

Looking for a place to stay in Catalkoy?
View all 43 holiday rentals