StayForLong
Expedia.com
Orbitz.com
View all 9 deals
Prices are provided by our partners, and reflect nightly room rates, including all taxes and fees known to our partners. Please see our partners for more details.
Payments made by partners impact the order of prices displayed. Room types may vary.
G4419QMdavew
21

Having spent 2 weeks at this wonderful resort where nothing was to much trouble,the staff were amazing we have holidayed at various places and can honestly say the staff here are brilliant,also proprietors Jane and Phil go out of there way to make sure your stay is one to remember,if your looking to recharge your batteries look no further,the venue is so beautiful,the food is first class freshly cooked Nothing left to chance would highly recommend this resort thanks to all for a really great holiday

See all 804 reviews
Payments made by partners impact the order of prices displayed. Room types may vary.
Nearby Hotels

Hotels.com
View deal
eDreams
ZenHotels.com
US$139
Expedia.com
US$193
View all 16 deals from US$139
568 reviews
1.1 miles from Shiva Samui
We compared the lowest prices from 16 websites 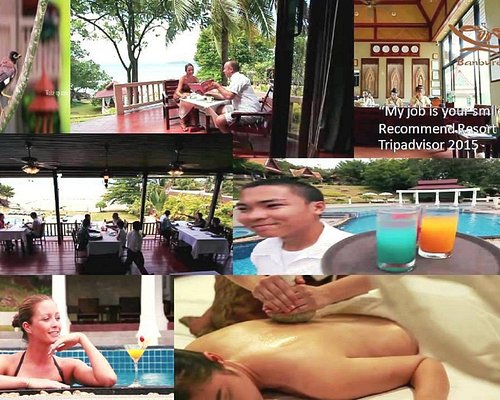 Decided to bring my family here on my day off Sunday and it was a very good idea! This place is just amazing. The whole pool area with plenty of sun beds, bar, pool table, ping-pong table is just great. They got all kinds of spots where you could chill out...if the sun beds is not your thing a cozy group of outdoor furniture with comfortable pillows might be a better option. The whole place has great music on an acceptable level that gives an relaxing feel. The staff is amazing...really great! They have a guy running around taking care of the guests and I hope they pay him good, because he sure make an amazing job! Hats off to our waitress as well, she really was super friendly and came over and had a chat with us. Now to the lunch and I am sorry, but there is by my opinion work to be done in this department! I had the Village Burger and it was a big disappointed...the bun ok and salad fresh, but the beef patty was overworked and lacked flavour. I also had several chunks of cartilage. The thai food we had tasted much better, it was flavour full. Since Shiva is a beach club we got to mention that the beach here is amazing as well. Calm water and beautiful white sand beach. Overall this place is just amazing and it is highly recommended!

This review is the subjective opinion of a Tripadvisor member and not of TripAdvisor LLC.
DozzaUK
London, United Kingdom
5518
Reviewed 2 March 2019
Lovely setting, shame about the dining experience

I came here with friends with the view to chill at the beach club for the day as we were told it was a great place. We arrived shortly before lunch and found an area to settle ourselves. We tried to get the waitress's attention for a menu so that we could order drinks. They were clearly short staffed and eventually we gave up and walked up to get menus ourselves. Having chosen our drinks, we decided we would order food too as we weren't sure when the waitress would come back to our table. I was about to go up and order everything when the waitress appeared. We ordered our drinks and food (3 mains and a salad to share) and asked for the food to be served in the restaurant.

We continued to chill on the sofas and the waitress called us when the food was ready. When we got to the table, there were only 2 main dishes and the salad. Fine, we thought, the last dish must be on its way. Unfortunately we did have to send our food back on several occasion as they were wrong and the last meal did eventually turn up. The waiting staff were very apologetic and very sweet and said they were 2 staff down in the kitchen which is probably why they got the food orders wrong. As a peace offering, they offered us a round of drinks on the house which we accepted.

This is a great place to come and relax because you can use the pool and they given yu towels without any charge. On this occasion, it was a shame about the mix up with the food which was delicious.

This review is the subjective opinion of a Tripadvisor member and not of TripAdvisor LLC.
sch0lin
31
Reviewed 20 February 2019
Time for wedding

My sister got married on Shiva. First of, the wedding-planner was fantastic! For all of you thinking of getting married here, this is the place. They set up a fantastic ceremoni on the beach and a nice dinner by the villa. For the resort, great staff and facilities. The kids loved the staff! They have nice BBQ on Saturdays.
Sitting by our private beachvilla pool, watching the sun go up in the morning is something for everyone to experience.
I really recommend Shiva!!

This review is the subjective opinion of a Tripadvisor member and not of TripAdvisor LLC.
murphyshols
London
2222
Reviewed 27 January 2019
Wonderful villa resort with great service: perfect for multi generational family holiday

We stayed at Shiva Samui from 7-14 July last year, 2018 and this is a very belated review (because we have young children and never get around to doing these things but this place really deserves our positive comments!)

We stayed in Banburee villa which was fantastic. It is stunning, built in a traditional style with high ceilings and spacious rooms, some with terraces and a gorgeous pool and spacious sitting room. We (family of four with 2 children aged 2 and 6) were there with my Dad (69) - flying from two different parts of England, my sister and her husband and my other sister and her husband and son (age 2) - flying from Australia. We chose the resort because we were looking for somewhere we could meet half way, where we could all relax (i.e. no shopping/cooking), have space to stay together but also enough space to spend time apart (!) and be able to all eat together then put the children to bed and stay up later (pretty much impossible in hotels). Shiva Samui ticked all these boxes plus many more.

A big draw of the resort is that it provides an ill-inclusive option. Given there were four different parts to our group (1 single adult, 1 couple, 1 couple with 1 child and 1 couple with 2 children) this was hugely attractive because we knew there wouldn't be any complicated sums in working out who owed what and, unlike in hotels, we would be able to eat and drink freely without worrying about the children not liking the food we'd paid a fortune for/dropping their ice creams after one lick) or the adults feeling limited because of the cost of cocktails and other drinks.

We all enjoyed the food. The menu has a good variety of options (we ate at the restaurant for every meal so 3x per day for 7 days). As we focussed on the Thai ones we did eat some duplicate meals out of choice they were so good. The children had more traditional European food like spaghetti bolognaise which went down very well. Generally the children's food came out very quickly and there is a little play area at the end of the restaurant next to the beach where they could burn off some energy between courses.

The staff at Shiva Samui were wonderful. A special call out for the restaurant staff who were so patient and understanding of our big group (they are quite used to groups but still, they were impressive). Also for always checking what the children were and were not allowed to order and for making a joke of the fact one 2 year old kept asking for apple juice (which she was not allowed and was never given!) The house keeping staff who came to our villa each day were lovely: so smiley and friendly and as with everyone in Thailand they clearly love children.

We didn't use the kids club other than the two 2 year olds playing with some of the toys a couple of times - the lady came over to our table and offered to take them and was very welcoming but we were quite happy to spend time together as an extended family (a rare opportunity).

My sisters and I went to the spa and had massages/facials/pedicures. The treatments were lovely. The spa is a bit tired but we had our eyes closed so it didn't really matter! We also had Personal Trainer session on the beach which was amazing (so hard and great!) which was arranged for us and included and also a Thai Boxing session with my brother in law - also included in the price. One of my sisters and I swam laps in the larger pool which is on the edge of the resort (this is the original pool which is next to the spa and is generally empty - the newer pool was built to respond to guests' requests to have a pool nearer to the beach and is shown in the pictures).

We aren't really into "theme nights" but we watched the fire show which was incredible - well worth it if you've never seen one - and the children enjoyed the face painting and disco.

All in all the villa, food, drink, staff were exactly what we hoped for and we felt we got excellent value. In response to the people who have commented that this is not a 5* resort, I think it's helpful to remember this is a collection of beautiful, traditional villas that have access to a shared pool, restaurant, spa, gym etc. It is not a 5* hotel which is absolutely immaculate everywhere but that is part of the charm of it (and it is also why it is priced as it is).

We all had an absolutely fantastic holiday and wouldn't hesitate in recommending Shiva Samui. We could also imagine returning at some point.

We can only apologise that it has taken so long to provide a review.

This review is the subjective opinion of a Tripadvisor member and not of TripAdvisor LLC.
Suzanne W
21
Reviewed 26 January 2019 via mobile
Secret paradise!!!

Everything here is just magic! Wonderful staff and facilities, just a lovely vibe. The place welcomes outsiders to enjoy their pool (as long as you buy some food and drinks) The music here is always on in the background making it such a nice place to relax and sip on pina coladas! The beach (Laem Set) and swimming pool is one of the nicest on Samui. This place is hard to beat. I highly recommend the beach BBQ on a Saturday 1-4pm.♥️♥️♥️Thanks to Jane the owner and the owner Dj for the lovely music. Spot on.Thank you for everything.

This review is the subjective opinion of a Tripadvisor member and not of TripAdvisor LLC.
View more reviews
PreviousNext
1…91011…
<script type='text/javascript' crossorigin='anonymous' async onerror=