Would stay there again, Eroy very helpful, did his best to make our stay enjoyable. - Review of Belle Kaye Apartments & Villa

“Would stay there again, Eroy very helpful, did...”
TWxuXzFfcml3
other traveller has booked this property 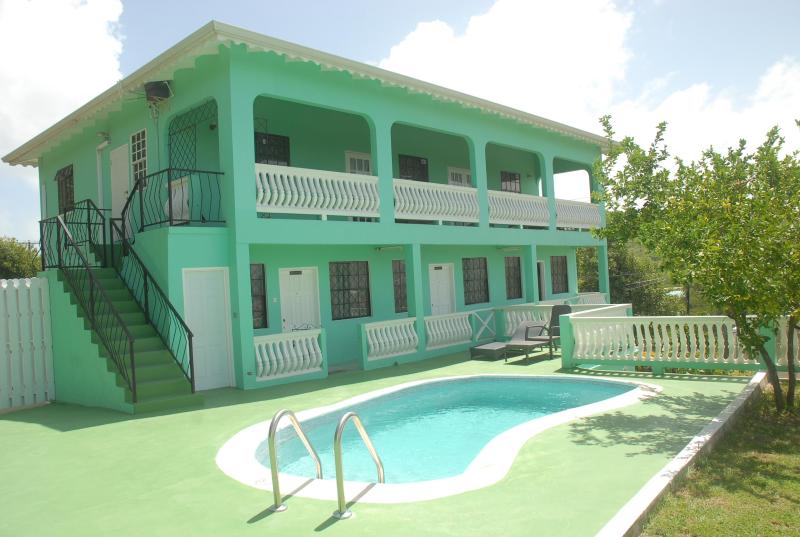 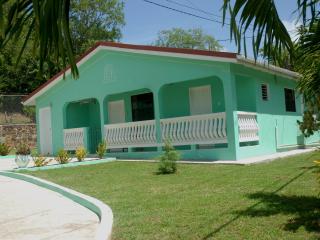 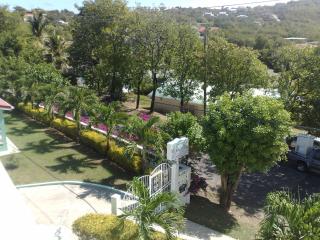 Very good - based on 73 reviews
Write a Review

1 helpful vote
“Would stay there again, Eroy very helpful, did his best to make our stay enjoyable.”
Reviewed 4 February 2011 for a stay in January 2011
1
person found this review helpful

We found the apartment very spacious and well furnished. Eroy was waiting for us, even though we didnt get there til after 7 at night, and was very helpful and informative about the Island. He organised a bbq one day for all of the guests, and took some of them down to the beach in his own car. He allowed us to use his own internet, free of charge, as we did not have a lap top with us. He left a bottle of Champagne for my wife, as it was her 60th birthday. There is a briliant view from the balcony, and it is close enough to Gros Islet, but you would need to get a bus or taxi to Rodney Bay.

Date of stay: January 2011
Travelling group: Spouse/Partner
Your age range 50-64
Would you recommend this hotel to a friend?   Yes.
Recommended for:
Was this review helpful? Yes
This review is the subjective opinion of a Tripadvisor member and not of TripAdvisor LLC.
Problem with this review? Thank you. We appreciate your input.

We stayed there 3 weeks in January 2011 with another couple: first night in 2 of the 1 bedroom suites, then moved to the 2 bedroom villa. We were misled as to the location and amenities of the villa in a number of areas:

- We were told that Belle Kaye was on a bus route. This isn’t quite the case. The nearest bus stop is a mile away near Gros Islet, so unless a bus has made a side trip up to Cap Estate you end up walking alongside a busy road to get anywhere. Return trips the bus drivers will usually go out of their way to drop you off at Belle Kaye, but only for an additional (and sometimes exorbitant) charge.
- We were told the Villa was ‘further back on the estate’ and wouldn’t be bothered by road traffic noise. Further back on the ‘estate’ meant we were actually closer to the road than the main building, and with the road being a busy one we ended up having to keep our windows closed at night with the a/c on to help drown out the noise.
- Nearest beach – we were told was a 10 minute walk. More like 15 going there, and 20 minutes back because it was mostly uphill. This beach was a lovely beach, but no washrooms or other facilities whatsoever, and much to our annoyance we ended up with sand fly bites that took a long time to heal. Pigeon Island Beach was a bit longer of a walk, but at least had some amenities.
- Were told that Rodney Bay/Reduit Beach was a walkable mile away: more like 2.5 miles so we ended up taking the bus when available, or a taxi otherwise. If staying at Belle Kaye you really need a vehicle (that is if you are comfortable on driving on the left hand side of the narrow roads, hills and roundabouts).
- The website led us to believe we were getting a ‘luxury’ villa. Note that most the pics shown are of the 3 bedroom upper suite or the one bedroom suites (the only interior pics of the villa showed the kitchen/dining area and the large bedroom) This was far from luxurious as the living & dining area had uncomfortable furniture crammed into too small of an area; the one bedroom was ridiculously oversized with the 2nd bedroom uncomfortably small and awkward.
- First 3 days we were in the Villa, the fridge wasn’t working properly. By that time some of our food was spoiling and the only way to get a cold beer was to put it in the freezer for a while. The owner, Eroy, had a repairperson come take a look at it, but didn’t fix it. It wasn’t until we discovered that the interior light was staying on all the time & heating up the interior that the problem was ‘fixed’ (we removed the bulb for the duration of our stay).

Be aware that:
* a gas barbecue is only available when Eroy borrows one from a friend (even then we didn’t get any bbq utensils until we’d had the bbq for a week);
* not all windows are screened and we found mosquitoes were a problem
* maid service is non-existent. We were led to believe we’d have twice weekly cleaning and change of linens & towels. This was actually just a supply of clean linens/towels. After many requests we finally got our floors cleaned after 2 weeks. We were only supplied with a 3’ broom that was falling apart which, once we complained, was replaced with a dust pan & hand brush set. On a further complaint we finally got a full size broom. Other basic cleaning items are not supplied.
* you are not allowed to hang out any wet bathing suits, towels, etc. on the balcony railings as Belle Kaye is part of the Cap Estate development and their rules prohibit this. You are expected to hang anything on the single retractable line in the shower to dry or use the clothes dryer. As we were diving while on St Lucia, it was impossible for us to hang our towels, wetsuits, and diving equipment on this small line. So we used the patio furniture to drape things on, and for a short time period would hang some things to drip dry on the chain link fence at the back.
* the stereo didn’t work (although Eroy assured us it did, but that it was finicky to use)
* if you wish to read in the evening, there is not enough light in the Villa to do so, as the wall lights are very low wattage and the bedside table lamps are small.
* parking is limited – we used our parking spot as a patio as the veranda on the Villa is too narrow to sit around a table
* telephone – will accept incoming calls, but for outgoing you’ll need to purchase credits
* the view from the Villa is mostly the parking garage under the main building, although from the 3 bedroom condo is very panoramic
* the ‘fully equipped’ kitchen was lacking in a few areas – no ice cube trays (if there are any there, is because we purchased them for our use), only 1 serving bowl, and the coffee maker was actually a European style coffee press (which is fine if that is what you expect)
* small insects (ants?) were in the cupboards so we kept all our dry goods (cereal, crackers etc) in the fridge. Eroy supposedly sprayed the cupboards, but it did little good
* outdoor furniture was very flimsy white PVC. We were told the set at the Villa was relatively new, but after using it for a week the chairs were already starting to split. Peter, the caretaker, eventually brought his own chairs from home for our use.

Things to commend:
• nicely kept grounds
• reasonably comfortable beds (although they are only double size), with good quality sheets and nice coverlets
• nice pool, although it could use more loungers (only 2), and additional patio tables & chairs (only 1 table w/4 chairs for everyone’s use)
• wireless internet was reliable
• Eroy (owner) and Peter (caretaker) were hospitable - took us to the Gros Islet Friday night Jump-Up (fish fry), held a beachside bbq for all the tenants one afternoon, and were generally helpful in giving us information about the area.

On retrospect, we should have stayed in the main building in the 1 bedroom suites where we would have had more living space, a better outdoor space by the pool, been quieter and better to catch any evening breezes, rather than in the 2 bedroom Villa (price would have been the same also). But even then, it wouldn’t have made up for the many shortfalls.

USA
Reviewed 18 September 2010 for a stay in February 2010
1
person found this review helpful
Date of stay: February 2010
Travelling group: Spouse / significant other
Your age range 45-54
Would I recommend this holiday rental to my best friend?
Was this review helpful? Yes
This review is the subjective opinion of an individual traveller and not of TripAdvisor LLC nor of its partners.
Problem with this review? Thank you. We appreciate your input.

Luton
Reviewed 17 September 2010 for a stay in June 2008
1
person found this review helpful
Date of stay: June 2008
Travelling group: Solo traveler
Your age range 45-54
Would I recommend this holiday rental to my best friend?
Was this review helpful? Yes
This review is the subjective opinion of an individual traveller and not of TripAdvisor LLC nor of its partners.
Problem with this review? Thank you. We appreciate your input.

London
Reviewed 17 September 2010 for a stay in April 2010
1
person found this review helpful
Date of stay: April 2010
Travelling group: Spouse / significant other
Your age range 35-44
Would I recommend this holiday rental to my best friend?
Was this review helpful? Yes
This review is the subjective opinion of an individual traveller and not of TripAdvisor LLC nor of its partners.
Problem with this review? Thank you. We appreciate your input.

New York USA
Reviewed 16 September 2010 for a stay in May 2010
1
person found this review helpful
Date of stay: May 2010
Liked best: Cleanliness, peace and quiet and family friendly and safe
Liked least: No automatic gate
Travelling group: Solo traveler
Your age range 55-64
Would I recommend this holiday rental to my best friend?
Recommended for:
Was this review helpful? Yes
This review is the subjective opinion of an individual traveller and not of TripAdvisor LLC nor of its partners.
Problem with this review? Thank you. We appreciate your input.

calgary alberta
Reviewed 16 September 2010 for a stay in March 2010
1
person found this review helpful
Date of stay: March 2010
Travelling group: Spouse / significant other
Your age range 55-64
Would I recommend this holiday rental to my best friend?
Was this review helpful? Yes
This review is the subjective opinion of an individual traveller and not of TripAdvisor LLC nor of its partners.
Problem with this review? Thank you. We appreciate your input.
Previous Next
1 … 6 7 8 9 10 …
Updating list...
Still can't find what you're looking for?

Looking for a place to stay in Cap Estate?
View all 60 holiday rentals