US$111
View deal
Free cancellation until 21/10/21
eDreamsUS$136
PricelineUS$122
TravelocityUS$136
View all 14 deals
Prices are provided by our partners, and reflect nightly room rates, including all taxes and fees known to our partners. Please see our partners for more details.
Payments made by partners impact the order of prices displayed. Room types may vary.
853matg
Birmingham, United Kingdom
134

I have given some thought about this review, and if I could have given 3.5 stars I would have. The room itself was fine, though dated. It's fine for a night or two but not really somewhere you would want to spend lots of time in. Even though it was dated, it is clean. It's location is good for Chester zoo if you have a car, and you can get a 10% off voucher for a local outlet village which was quite handy. On the whole it was "ok". Not the best I have stayed in by a long shot, but it was functional, clean and decent I suppose.More

Dear mat g
Thank you for reviewing your recent stay with us at The Brook Mollington Banastre Hotel and Spa and I am pleased that you found the Hotel to be both comfortable and conveniently located for Chester and Cheshire Oaks. We are currently engaged in a programme of redecoration and refurbishment at the Molly B and I do hope that once this is completed we can look forward to welcoming you back to the Hotel once more.
Kind regards
Denise Ummat

Report response as inappropriateThank you. We appreciate your input.
This response is the subjective opinion of the management representative and not of TripAdvisor LLC
See all 2,393 reviews
Payments made by partners impact the order of prices displayed. Room types may vary.
Nearby Hotels 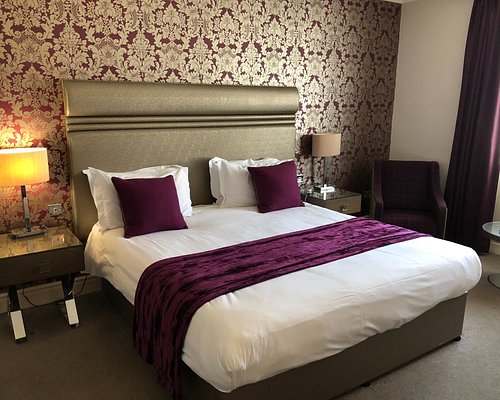 Dear Jean
Thank you for taking a moment to review your stay with us last weekend. I am delighted to read that once again Mr Gavin and his team looked after you so well and that the Finetunes event was enjoyed by all and was such a resounding success.
It will be our pleasure to welcome you back again next year and of course if there is anything more we can do to help your stay be more comfortable please feel free to contact Mr Gavin directly.
Kind regards
Denise Ummat

Report response as inappropriateThank you. We appreciate your input.
This response is the subjective opinion of the management representative and not of TripAdvisor LLC
NickMartin1964
Leicester, United Kingdom
1
Reviewed 13 April 2016
Enjoyable Event

We have just come back from The Brook Mollington having organised a Friday to Monday break for around 100 people. Despite a slight hiccup over breakfast on the Saturday morning, we have nothing but praise for the staff and manager. They were polite, attentive and made sure that we had everything we needed, going that extra mile. the food was excellent and plentiful. Our only criticism is that the hotel is starting to look 'tired' in places and could do with having a refurb. Some of our guests experienced the odd leak, but those were sorted out very swiftly, although judging but some of the damp patches these weren't new but reoccurring leaks. That said, the hotel is in a lovely part of the world, it was quiet and the staff did all they could to make our stay enjoyable and run smoothly.

Room tip: Ground floor rooms are great for people with limited mobility or wheelchairs as there are no lifts to the 1st or 2nd floor.
Ask NickMartin1964 about Brook Mollington Banastre Hotel & Spa
Thank NickMartin1964

Dear Mr Martin
It was wonderful to welcome you back to the Hotel again this year and I am delighted to read that you all had such an enjoyable weekend. Please accept my personal apologies for the slight hiccup at breakfast on Saturday as along with Mr Gavin I appreciate your kind understanding. I am delighted to read that the weekend was such a success and enjoyed enormously by all those who attended.
I believe Mr Gavin had the opportunity to talk to you regarding the refurbishment programme Brook Hotels have planned for the Molly B . This will see additional public areas updated and more of the bedrooms redecorated over the forthcoming months. And naturally we look forward to welcoming your Finetunes event back once more to enjoy the changes we have made.

Report response as inappropriateThank you. We appreciate your input.
This response is the subjective opinion of the management representative and not of TripAdvisor LLC
dylansykes
Halifax, United Kingdom
1
Reviewed 12 April 2016
The best hotel ever !

the ater noon tea was delicous with great tasty treats like merounges,lemon-drizzle cake,hot cross buns,and scones but the sandwiches i dont were to start they were salmon,egg,tuna with cucomber and so much more definetly get it again! Our hotel was amazing especialy our bedroom it had easy to work showers and extra large baths it had very very nice smelling hand wash and it had extra big space in the drawers and wardrobe for clothes and my faveroute cosmeticts theres even a pool and hot tub plus a steam room and a sauna

Thank you for making your review of the Hotel and Afternoon Tea your very first TripAdvisor review. I am delighted to read that you found your room comfortable and that you found Afternoon Tea to be so delicious. I will of course pass your kind words on to Chef . Meanwhile , I do hope that we can welcome you and your family back to the Hotel again very soon.
Kind regards
Denise Ummat

Report response as inappropriateThank you. We appreciate your input.
This response is the subjective opinion of the management representative and not of TripAdvisor LLC
Liz H
Preston, United Kingdom
33
Reviewed 10 April 2016 via mobile
Fine Tune Event Keyboard Weekend

An absolutely superb hotel with a very professional and helpful manager. The rooms clean and comfy, food excellent and all the staff very helpful and friendly. I would be happy to recommend the hotel to anyone. I especially like the light restaurant overlooking the garden. The bar area with comfy seating and the large function room also lovely. I will be back next year.

Thank you for your delightful review as it was a pleasure for The Brook Mollington Banastre Hotel to host the “Fine Tune “ keyboard event again last weekend and even more rewarding to read that our hospitality has stood out for the right reasons. It will be my pleasure to pass your kind and generous comments on to Mr Gavin to share with all his team and of course we look forward to seeing you back again next year .
Kind regards
Denise Ummat

Report response as inappropriateThank you. We appreciate your input.
This response is the subjective opinion of the management representative and not of TripAdvisor LLC
cardgirl
Anglesey
5124
Reviewed 9 April 2016 via mobile
Not how it used to be

Having been a favourite of ours near Chester, we thought we'd visit after not visiting for a while.

The special offer looked very appealing however this turned out to be ambiguous and misleading - even the restaurant manager said so.

On arriving in the car park it was clear to see that the hotel was in need of sprucing up, distressed paint work, shabby borders and hedging (and the hotel boasts of the owners family link to Diarmud Gavin the gardener!) broken untidy vertical blinds - disappointing. Check in was not professional with the gentleman very flustered and then wandering off. Leaving the what I assume was the deputy manager to try and check us in.
We were given rooms facing out towards the garden as requested. Very disappointing again, it is very clear that no money is being spent on upkeep. Upholstery was dirty, window in entrance hall of room broken and window fan broken. Furniture very worn. Bathroom furniture was clean but floor had hairs on it. Where pipes had been removed the holes were just left and not filled.

The major attraction used to be the spa / health club - oh dear. One member of staff who was overseeing pool area after having done an 8 hour shift in beauty salon was expected to work until 10pm. Health and safety? She was very lovely but obviously tired. Entering the ladies changing room I was welcomed by a full used laundry trolley taller than me (I'm 5'4") the pool which was supposed to be empty of children by 6pm still had them in at 7.30. This was followed by a man walking his dog down to the gym alongside the pool, then walking the dog back to reception where it was left and continued to bark at it's owner who was now in the hottub. No the dog was not a guide dog or anything special - it just didn't like being in the car! He enlightened me, obviuosly a very caring establishment as he always does this. Sauna had chunks out of the wood benches which snag swimwear, steamroom has had seats replaced and the walls not repaired from removing old ones.
Then to the 'Fawlty Towers' dining experience. We booked our table for four adults on arrival. As we walked to table we passed large bowls of breakfast cereal very partially covered with cling film, needless to say they were still there at breakfast. Back to dinner, ordered drinks, after 20 mins no sign so I asked the young man waiting on, running round and generally trying to tell the very uninterested inexperienced older chap what to do. He came back with order 10 mins later followed by the deputy manager with same round straight after. Starters came out for 3 of us and mine 5 mins later grubby mussels not debeared with loads of closed ones. The older chap then cleared the plates of the men and left the ladies. Mains came out and got taken back so the remaining starters plates could be removed before being brought again cold. Desserts ordered very poor, two chocolate puds that should have been the same looked and tasted totally different.
Breakfast probably the poorest we've ever experienced dried up beans, undercooked bacon, overcooked scrambled eggs no pastries, one flavour of yoghurt one type of juice and the soggy uncovered cereals - £12.50 per person.
Check out farcical. Back to misleading ambiguous offer, room including 3 course dinner - nope room with dinner off a certain menu that was never offered even though when we arrived at restaurant I was asked if I was on the special tariff. £162 extra!!!!!
Needless to say the promised phone call from the other Mr Gavin never materialised.

I am so sorry to read that you left the Hotel in January disheartened with your stay especially as you have visited before and had such a wonderful time. If you would like to contact me personally on info@brook-hotels.co.uk, I will be able to look into this matter further on your behalf.
Kind regards
Denise Ummat

Report response as inappropriateThank you. We appreciate your input.
This response is the subjective opinion of the management representative and not of TripAdvisor LLC
View more reviews
PreviousNext
1…191192193…