A great stay in Hungary - Review of Prestige Haz

US$69
View deal
Free cancellation until 04/10/21
Orbitz.com
PricelineUS$73
eDreamsUS$69
View all 11 deals
Prices are provided by our partners, and reflect nightly room rates, including all taxes and fees known to our partners. Please see our partners for more details.
Payments made by partners impact the order of prices displayed. Room types may vary.
Frostipops
Lowestoft, United Kingdom
7023

A great stay in Hungary

I stayed here during my first visit to Hungary and was very impressed by the cleanliness and facilities offered in this hotel. My friend and I required a single room each but as they couldn't accommodate this, we were offered a 2-bedroom apartment within the hotel. It was so spacious we couldn't believe our luck. Even the kitchen had a full size dining table with 6 chairs! The sitting room was huge and had an enormous TV. And the bedrooms were a double and twin, both with their own balconies.

Room tip: We stayed in the 2 bedroom apartment with lounge, kitchen, bathroom and loo, which was superb. Both bedrooms had balconies.
See all 41 reviews
Payments made by partners impact the order of prices displayed. Room types may vary.
Nearby Hotels 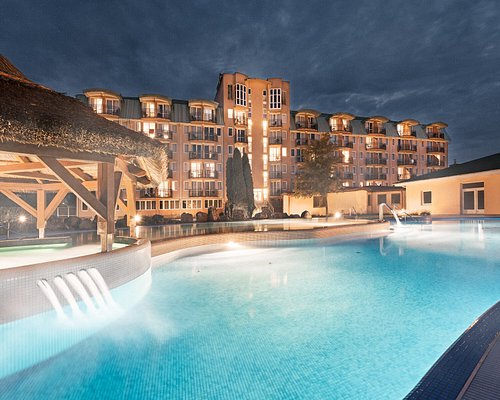 My girlfriend and I were looking for quite place to have romantic relaxing weekend after a long working week.
We found this place on the internet, and we couldn't e-book the room. we called them, and they arranged for everything.
The room are very clean and there is allot of space.
the breakfast was good.

Overall we enjoyed our stay.

This review is the subjective opinion of a Tripadvisor member and not of TripAdvisor LLC.
eseriva
Budapest, Hungary
712
Reviewed 4 November 2013
Good value

This tiny hotel has a superb price/value ratio. It has a small (but great) wellness area with sauna and open-air jakuzzi, and offers very good breakfast. It's located in walking distance from the lake in the residential area, which gives it a calm atmosphere. The hotel itself has just a couple of rooms, so it's great if you want to avoid the main tourist areas.
The rooms were clean and the furniture was in very good condition. Keep in mind that the reception is not open 0-24, it's open till 9pm, so plan your route accordingly. The staff is welcoming. I would highly recommend this hotel, and would stay here next time.

This review is the subjective opinion of a Tripadvisor member and not of TripAdvisor LLC.
Boris R
Hanford, California
1
Reviewed 25 October 2013
The best ever experience

This review is the subjective opinion of a Tripadvisor member and not of TripAdvisor LLC.
gergely_kollin
Budapest, Hungary
99
Reviewed 2 November 2012
Perfectly does what is says on the tin

We spent 6 night and for a family of 5 the apartment we got was simply perfect. The size is generous and the furnishing is very modern. You have that quality feeling all the way. Separation from the kids is sorted with 2 rooms, one of them being a twin room with separate beds. Breakfast is advocate and the staff is very courteous. You are in a very quiet location but nevertheless close enough to action. Highly recommended.

This review is the subjective opinion of a Tripadvisor member and not of TripAdvisor LLC.
pasber
pasber
417
Reviewed 18 May 2012
Overrated and Expensive

My husband and I stayed here a year ago for about 10 days. We were booked there by our dentist, who had an arrangement with the hotel to provide discounted rates along with free transportation to Vienna or Budapest--the transportation is critical because Vienna is about a 3 hour drive and Budapest about 2.5 hours. We paid roughly $80 a night for a hotel that is classified as a four-star. No way. This hotel is 3 star at best. We had the worst room in the hotel, on the first floor, facing the street. Furnishings were modern but plain. The best part was the bathroom. We could hear a lot of the conversations going on in the street outside. The hotel is in a residential area, about a 10 minute walk from town. The location is fine, and there is a decent restaurant a couple of houses away. We have stayed in Heviz twice before (2008) and have no problem with the distance, as it is a very walkable town. The big advantage of the hotel is that they had a clerk who spoke decent English--otherwise, a visitor had better know German (their second language). Service was ok, except on one day, they did not come in to clean at all.

I would give this hotel 3 stars except for one thing: the night before we were to leave, we were informed that we would have to pay cash because their credit card machine had broken down. We had to leave right away to walk to the shopping center (which had closed, but fortunately, the ATM was available) and withdraw about $700 in cash from the ATM. We had to make 2 withdrawals because of ATM limits. If I hadn't contacted my bank prior to leaving for Europe and receiving expanded withdrawal privileges, we might not have been able to come up with the cash. And couldn't the hotel have just phoned VISA to get authorization for the charge??

First of all, I would like to thank for having chosen our hotel for your stay in Hévíz.

I am very sorry to learn from your comment that not every service were up to your expectations, although, as I remember well, you didn't ask us to change your room during your stay. Of course, it would have been resolved, if you asked it.
The failure of our card terminal also for us was very unpleasant and annoying, we are very sorry about it.

There is a continuous effort on our side to improve our services and we are grateful if you share with us your unfortunate experiences, in details.

We do very much hope you will find the time and opportunity to return to our hotel and that we can regain your confidence.

Looking forward to hear from you soon and welcoming back to Hotel Prestige Haz,
I remain with kind regards:

Report response as inappropriateThank you. We appreciate your input.
This response is the subjective opinion of the management representative and not of TripAdvisor LLC
View more reviews
PreviousNext
1234…