Our group only stayed at this hotel for one night before exploring Halong Bay the next day. We thought that the hotel was very good, the rooms spacious and modern. Some of our party had to move rooms as they badly smelt of cigarette smoke, but this was carried out immedietly and without any problem.

We all ate in the hotel that night and the food was quite good. Breakfast was a mixture of Western and Asian.

The night market was on in the evenings but it was very quiet with very few people walking around. In fact the whole area was very quiet.

See all 69 reviews
Payments made by partners impact the order of prices displayed. Room types may vary.
Nearby Hotels 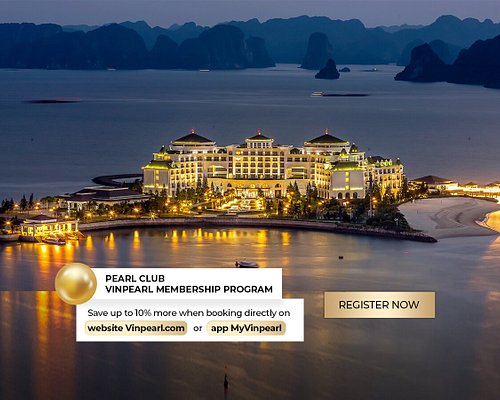 Hotels.com
View deal
Pay up to 12X
Trip.com
US$930
Agoda.com
US$598
Tripadvisor
US$365
View all 10 deals from US$365
114 reviews
4.7 miles from Heritage Halong Hotel
We compared the lowest prices from 10 websites
Breakfast included
Vinpearl Resort & Spa Ha Long
US$217

Prestigia.com
View deal
FindHotel
Destinia.com
US$148
Agoda.com
US$192
View all 15 deals from US$148
804 reviews
2.0 miles from Heritage Halong Hotel

Expedia.com
View deal
FindHotel
ZenHotels.com
US$81
Trip.com
US$85
View all 16 deals from US$81
333 reviews
0.7 miles from Heritage Halong Hotel

Hotels.com
View deal
Free cancellation
Pay up to 12X
Expedia.com
US$430
CheapTickets
US$430
Orbitz.com
US$430
View all 8 deals from US$430
119 reviews
0.1 miles from Heritage Halong Hotel
We compared the lowest prices from 8 websites
Breakfast included
Halo Bay Homestay
US$16

Priceline
View deal
Expedia.com
US$21
Booking.com
US$16
Hotels.com
US$21
View all 12 deals from US$16
30 reviews
2.7 miles from Heritage Halong Hotel
We compared the lowest prices from 12 websites
Breakfast included
Saigon Halong Hotel
US$112

We ended up in this hotel after arriving from Hanoi after a tiring 4hr coach ride. Though not as what we had expected, we didn't have much to complain because it was already quite late and all of us were worn out. Our local tour guide and the coach driver who had responsibly travelled with us all the way from Hanoi even during Christmas Day. At the breakfast buffet the next morning, everything was fine (except of course the less than appealling food on parade) until both our tour guide and coach driver arrived for their breakie which they were always accorded (paid by their company) in all the other hotels we have stayed thus far. To our disgust, only the tour guide was allowed entry but not the driver. My brother who saw the incident tried to explained to the cafe captain that it's so very unfair when only one person is allowed entry when either one cannot perform the assigned job without each other. The driver definitely deserves a good and satisfying meal in order to work well in our case, driving safely to ensure tourists safety. But everything came to a very dissappointing and unhappy end when he was rudely turned away. What irked us is we have not encountered any problems with the other hotels or restaurants that we have patronised yet this supposedly 4star rated double standard hotel openly displayed their arrogance and bad attitude when it comes to a meanial sum. Even when we, their guests tried to reason with them, they just showed us their pucker face. I would from now on, discouraged all would be guest or traveller from staying in Heritage Halong Hotel because it's really a not good value for money and their service sucks!!

This review is the subjective opinion of a Tripadvisor member and not of TripAdvisor LLC.
MGMTraveler
Phoenix, AZ
371171
Reviewed 5 August 2010
Good quality hotel - nothing unique but the area.

After all day visiting the beautiful rock formations in the bay - I don't remember all that much about the hotel. It was well maintained, and recently decorated. The room was comfortable. Breakfast buffet was much more "native" than touristy. I'm more western, and had trouble finding food that appealed to me. We traveled with some Asian families, and they were impressed with the buffet. The town doesn't have much going on after dark.

We stayed here on a family trip to Vietnam for the day. The rooms were nice and appeared clean and we had the most spectacular view of Halong Bay. The front desk people were cordial and set us up in our rooms in no time. The rooms we stayed in were what I would classify as 3-3 1/2 stars (the decor was nice and appeared relatively new and the room was neat and tidy). The breakfast buffet selection was great--they had a vast selection of Vietnamese as well as Western-type food (i.e. sausage, eggs, bacon, etc.). The food was decent. Overall, I thought the place was a great stay until my sister saw a roach near the pastries during that morning. I am big on cleanliness so were it not for that, I would have rated this hotel above average to excellent.

Aesthetically, the place is a nice place to stay, but the roach incident ruined it for me.

This review is the subjective opinion of a Tripadvisor member and not of TripAdvisor LLC.
omcd
Dublin
540
Reviewed 27 September 2007
Does not deserve 4 * rating

After coming back from a trip through Vietnam, the Heritage Halong Bay was the most disappointing part of our holiday.

The room was small, dated and the air conditioning smelled unpleasant. The restaurant was also dated and the food wasn't of a very good standard. The bar was musty and the only customers were the local 'ladies'. The pool was dirty and uninviting.

Halong City itself is unappealing. If you are going to visit Halong Bay I would recommend doing an overnight boat trip out on the bay. The boats looked fabulous, and we are very disappointed that we missed out on this opportunity. Try to give the 'city' a miss, the bay itself is so stunning - stick to that!