US$148
View deal
Free cancellation until 13/08/21
Orbitz.com
eDreams
Expedia.comUS$181
View all 14 deals
Prices are provided by our partners for one room, with variable occupancy rules as provided by the property, and reflect nightly room rates, including all taxes and fees known to our partners. Please see our partners for more details.
Payments made by partners impact the order of prices displayed. Room types may vary.
Zulhaimi S
Kuala Lumpur, Malaysia
41

Check In - Giving a room which already occupied by another person.
Cleaning room at 9pm ??
Cannot speak Malay....even bad speaking English
Bills not updated. ( Please check the bills before you pay)

See all 172 reviews
Payments made by partners impact the order of prices displayed. Room types may vary.
Nearby Hotels 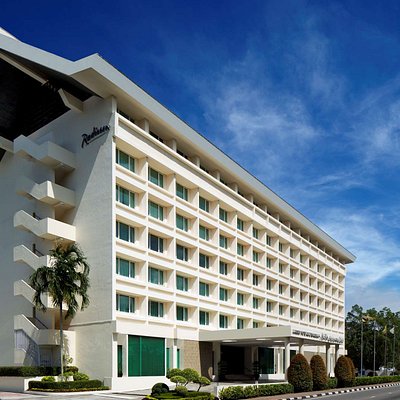 Hotels.com
View deal
Travelocity
ZenHotels.com
US$87
Orbitz.com
View all 15 deals from US$87
425 reviews
3.0 miles from Mulia Hotel
We compared the lowest prices from 15 websites All europeans lumped on the same floor which meant dealing with overpaid drunken english oil workers partying on all night. Hotel staff seemed unintereseted to deal with situation, will never stay there again. Breakfast however, was well organised and a good selection. Dinner on the other hand was fine as long as you have enough time to kill - service very slow..

This review is the subjective opinion of a TripAdvisor member and not of TripAdvisor LLC
kFamof5
Auckland Central, New Zealand
23
Reviewed 22 July 2010
A DUMP

This is the worst hotel I have ever stayed at. Ever. For a supposedly 4 star hotel this place is a disgrace. Our room had food on the floor, the sheets had not been changed - had food, hair, dirt in them. So asked to be moved which finally they agreed too after saying they had no rooms. Where we got bitten by bed bugs. Grey towels, shower did not drain properly and generally filthy. Disgusting. Royal Brunei put us up there due to flight changes. Not likely to fly them again if this is what I can expect.

This review is the subjective opinion of a TripAdvisor member and not of TripAdvisor LLC
klarec2015
Oxford, United Kingdom
6052
Reviewed 6 July 2010
Comfortable

Our airline put us up at this hotel when they changed our flights.

The hotel was very close to the airport which was ideal for our 12 hour stopover. The rooms were large and clean as was the bathroom. The air conditioning in the room was a blessing.

We were provided with bottled water and free meals in the hotel restaurant. The food was good with plenty of options for vegetarians.

The hotel provided a free shuttle bus service to the city centre. This took us to the river side where you can barter for a boat tour up the river and through the water city, on our trip we saw a variety of monkeys and snakes in their native habitat.

The only difficulty we had with the hotel was the bus that was due to collect us from the city and return us to the hotel, it was over half an hour late so we ended up getting a taxi back to ensure we didn't miss our flight. Fortunately, on our return the hotel were more than helpful with our transfers back to the airport and we arrived with sufficient time.

This review is the subjective opinion of a TripAdvisor member and not of TripAdvisor LLC
Aegisint
Jakarta, Indonesia
293223
Reviewed 12 June 2010
Its cheap, clean and basic, nothing more

The hotel is very close to the airport and its in the middle of the SEA Games park, thats about all that would recommend it.

The rooms are very basic. The fittings are very 3star. Rooms are big, but nothing in them the space is pretty much wasted. After checking in around 11pm took more than hour to get everything in the room working with a few visits from maintenance and housekeeping. Staff are friendly enough but nothing happens quickly here.

Internet is wifi and free throughout the hotel, I suppose that is a nice touch.

Bathroom is very old, the towels are what you expect in a 3 star hotel, they turn grey as soon as you use them. The water was hot but not much of it. The amenities were again very basic.

The breakfast is buffet style, selection pretty limited, not sure what the sausages were made of but I decided not to take the risk and didnt eat them, they looked very anaemic. Kway Teo was actually quite good, not much else looked worth eating, I asked for fried eggs, and they were certainly fried, to within an inch of having to call either the fire department or the coroner. No option for soft (sunnyside up) fried eggs, doesnt matter what you ask for you get them very well done. Coffee was not drinkable.

Check in and check out was very efficient and friendly, perhaps much slower than it needed to be given there were no other guests at either time.

I returned to the hotel in the afternoon to use the lobby for a few hours until my flight. Again very friendly front door and reception people. I tried to get a coffee or even a glass of water, but that seemed beyond the comprehension of the dining room staff so I had thirsty 3 hour wait and decided to go to the airport much earlier than I needed to just so I could get a coffee and some water there.

There is only one restaurant. I only had breakfast there so cannot comment on the rest of the menu, but its an old looking style so I imagine the menu will be the same.

Overall, this is just an average hotel. Its old. Its cheap. Its comfortable without any frills. Its a great place for those traveling on a budget or those who feel that they might want to use the SEA Park facilities (pool, olympic track etc). Its close to the airport, thats probably its major attraction.

Great staff, fabulous menu, wonderful help with my disabled brother, nothing too much trouble will visit on my own next time to see the sights

This review is the subjective opinion of a TripAdvisor member and not of TripAdvisor LLC
View more reviews
PreviousNext
1…222324…
<script type='text/javascript' crossorigin='anonymous' async onerror='__scriptLoadError(this,true