Worth the money, clean, comfy and the wifi was SUPERB! - Review of K-Pop Guesthouse Seoul Station

eDreams
getaroom.com
Agoda.com
Prices are provided by our partners for one room, with variable occupancy rules as provided by the property, and reflect nightly room rates, including all taxes and fees known to our partners. Please see our partners for more details.
Payments made by partners impact the order of prices displayed. Room types may vary.
josephj796
Malaysia
96

Worth the money, clean, comfy and the wifi was SUPERB!

I spent 7 nights here in a twin room (one bunk bed). Generally good in term of cleanliness and service. Even though the room was a bit small for two of us, but the bed was quite comfy. Worth the money and the wifi was superb too! Since it's near the seoul station, so practically you can travel to everywhere very easily through the subway.More

Show less
Review collected in partnership with this hotel
This business uses tools provided by Tripadvisor (or one of its official Review Collection Partners) to encourage and collect guest reviews, including this one.
Google Translation

Report response as inappropriateThank you. We appreciate your input.
This response is the subjective opinion of the management representative and not of TripAdvisor LLC
See all 161 reviews
Payments made by partners impact the order of prices displayed. Room types may vary.
Nearby Hotels

Breakfast included
Sponsored
Toyoko Inn - Seoul Gangnam
US$62
Booking.com
View deal
Free cancellation
Expedia.com
US$63
Trip.com
US$61
Hotels.com
US$63
View all 14 deals from US$61
25 reviews
We compared the lowest prices from 14 websites 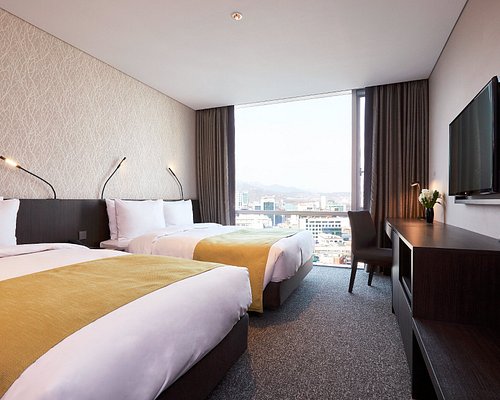 Agoda.com
View deal
Free cancellation
Booking.com
US$104
Hotels.com
US$98
Orbitz.com
US$98
View all 15 deals from US$88
33 reviews
1.6 miles from K-Pop Guesthouse Seoul Station

My 2weeks @ Kpop stay were incredible, staff were kind & helpful, specially Marcel, who went above & beyond to show us around hongdae. I felt very at home there & made many friends. Clean, cheap, ace!

Report response as inappropriateThank you. We appreciate your input.
This response is the subjective opinion of the management representative and not of TripAdvisor LLC
Jhayna05
1
Reviewed 29 October 2014
Cool guesthouse with a good location.

Me and my friend stayed here for 5 nights. The front desk people are nice esp Catherine. :)) the rooms are clean and cozy. The only thing i could say that is negative is that it is very tiring to go up the stairs if u have a lot of things to carry. Other than that the place is great and worth of ur money if u want to stay in Seoul.

Report response as inappropriateThank you. We appreciate your input.
This response is the subjective opinion of the management representative and not of TripAdvisor LLC
Annmarie O
Glenolden
41
Reviewed 18 September 2014 via mobile
Cheap, clean, convenient, and friendly!

If you want your money's worth this is a great place to stay. It is basic but it is clean and safe with a great location right next to seoul station. I would return again! Very friendly and helpful staff!

Report response as inappropriateThank you. We appreciate your input.
This response is the subjective opinion of the management representative and not of TripAdvisor LLC
Tan T
32
Reviewed 15 September 2014 via mobile
Nice, cozy and clean

For those who want the travel convenience from Seoul station, this place is good. Small, nice pantry. Simple breakfast of bread, butter and jam comes with with coffee, tea, fresh milk and nice orange juice. Good basic facilities. Staff is helpful. Glad they can speak English.

This review is the subjective opinion of a Tripadvisor member and not of TripAdvisor LLC.
phluffles
Sydney, Australia
3913
Reviewed 27 August 2014
Good Location

I stayed in a twin room here for about 2 weeks, the first 5 nights with my cousin and by myself for the rest of it. We had a bit of trouble finding the hostel as we didn't know Seoul Station is that big! The most convenient exits are 10 or 11 although I mostly used the latter. This would not be the ideal place for anyone with heavy luggage as there are a number of stairs to tackle not only on the way to the hostel but within the hostel itself as there is no lift. (This is in addition to navigating through the crowds and escalators.) Luckily, I was given the corner room on level 2 (which is the first level up) but still had to go up two flights of stairs which were narrow and steep.

My room was a shoe-box size, just enough to fit two people in (we had a bunk bed) and the bathrooms were shared with other rooms on the level. Rooms can be cleaned daily by request (before 11am) although it's just a basic wipe down and changing of the bin. The two bathrooms available for my level were also cleaned once a day and depending on the hygiene of other guests, it was either pretty dirty or just relatively clean. Wi-Fi is available in each room and has a strong connection. It was fairly cold in Seoul during my stay and the floor heating in my room felt like it was randomly turned on/off (by staff) but was never unbearable.

The kitchen/common area is very small (also where the computers are) but I only went in there for water, although tea, coffee, bread, and other condiments were available in the mornings.

Whilst this hostel is located in an alley, which can be pretty dark and seem a little shady with random men around at night, I didn't feel it was dangerous and was always left alone. The hostel doors are locked after 11pm but you are given the passcode should you stay out late.
There is a big supermarket and other stores in the main area of the subway station as well as a corner shop which of course charged a bit more for items but was generally open til late.

I wouldn't mind staying there again on my next trip due to the convenience of it being at Seoul Station but I will try to find accommodation with easier access first.