Travelled on Air China to Hokkaido with a layover in Beijing. After Customs at Beijing International Airport look for the Air China Transfer Desk for transport to the hotel. Depending on the number of people, a mini bus or a bigger one will transport you to the hotel. A guide is provided to bring your group to the upper floor to wait for the transport. Just make sure you stick close to the group. A 15 mins drive brings you to the hotel. There are quite a few of these transit within the area so depending on which one you picked. Make sure too that you hv the Beijing sector boarding passes as the Transfer Desk staff will check these. At the hotel, passports are checked n then you are informed of the next morning transport to bring you back to Bjg Airport for yr next trip. Everything we're done efficiently n you get to the room pretty quick for yr rest over. Nothing to shout abt the accommodation, no frills but adequate. All in all ok for the stopover.
Next morning bus was on time n we left uneventfully to airport.More

Show less
Trip type: Travelled as a couple
See all 75 reviews
Payments made by partners impact the order of prices displayed. Room types may vary.
Nearby Hotels 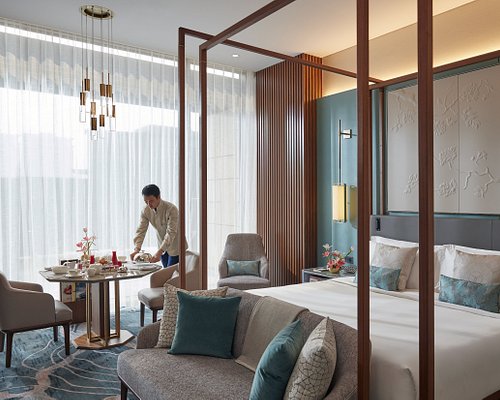 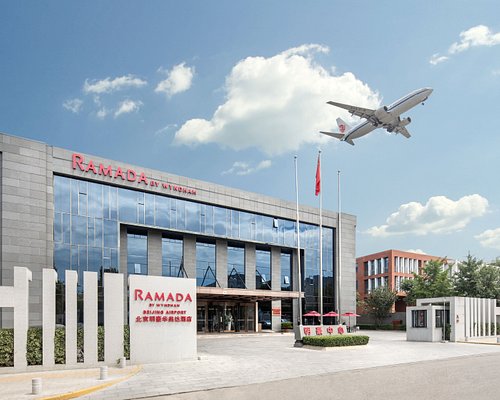 Priceline
View deal
Free cancellation
Hotels.com
US$605
Expedia.com
US$605
Booking.com
US$606
View all 15 deals from US$605
1,196 reviews
10.4 miles from Airport YUANHANG International Hotel Beijing
We compared the lowest prices from 15 websites
Sponsored
Regent Beijing
US$163

Expedia.com
View deal
Booking.com
US$192
Hotels.com
US$202
Priceline
US$202
View all 17 deals from US$192
5,857 reviews
12.3 miles from Airport YUANHANG International Hotel Beijing

The hotel is situated very near to the airport, so it's easy to get there . But the hotes stuff did't know english at all !!! We were asking some questions about our stay and they were not able to explane anything to us, just talking to each other and laughtng .But anyway , the room was good enough, clean and large .There was an english speaking guy at the front desk during day time .

This review is the subjective opinion of a Tripadvisor member and not of TripAdvisor LLC.
Sandie02
Shenzhen, China
250160
Reviewed 30 June 2017 via mobile
Hainan airlines

Hainan canceled our connecting flight and put us up here. My son had the same thing earlier this week. So seems like a typical thing Hainan does to save money as this is a relatively cheap hotel.

If you ask they will credit 25rmb per meal. The hotel food was below average. Have never had green beans ordered inedible in china.... But they lacked the green color and flavor, so was a real waste since it's my go to dish.

We got 2 rooms one smelled the other was fine. Too tired to switch. Skipped breakfast in hopes of catching early flight but no such luck. Book while at airport if you get this problem with Hainan... Wish we had planned ahead better but was on international flight and exhausted.

They have free shuttle service in nice bus, and staff are very accommodating and helpful with Hainan passengers.

This review is the subjective opinion of a Tripadvisor member and not of TripAdvisor LLC.
HappyTamandua
Guangzhou, China
7146
Reviewed 23 June 2017 via mobile
Scammed

My flight was delayed and I missed my connection and was stuck in the Beijing airport at 11pm. A nice lady wandered up to me and asked if I needed a hotel. After 11 years in China apparently I have still learned nothing. I asked if I could see the rooms and how much it cost. She said it was 4 stars and they had different price ranges. She looked up a few pictures online and showed me. I opted for the 680rmb a night room ($100) as I was tired and it was close.
The hotel is really trashy. Not one star but CERTAINLY NOT 4 STARS.
At 7:30am in the morning I was awakened to banging on the door. The woman said I needed to leave at 8. I was told checkout was at 2pm. I was leaving early anyways and asked if I could leave at 9. She said ok. I went back to sleep. 8:30am she starts banging on the door again and tells me I need to hurry up it's almost 9. The entire hotel has no power at this point so I use the lamp in my iPhone to fumble around the barely running water in the shower, at least it was warm. The elevator isn't working since there is no power so I carry all my luggage down the stairs from the 4th floor. Check out.
Later that day my flight is cancelled again at the same airport so I go to the hotel information desk to get a different hotel. THEY ONLY HAVE BROCHURES FOR THAT HOTEL AND RECOMMEND IT AT THE INFORMATION DESK. Someone is getting cash on the back end and I cant believe the Beijing airport hotel information desk is scheming together with this subpar hotel located in a dodgy part of town near nothing except the airport. After a quick search on hotels.com I found a room at the Concordia in a REAL 4 star hotel near the city center for about the same price. Don't do it folks!

This review is the subjective opinion of a Tripadvisor member and not of TripAdvisor LLC.
BCert
Sydney, Australia
42
Reviewed 19 June 2017
On Transit

It has provided excellent pick up from and drop off to the airport . Rates were very reasonable not like most of the other hotel. Check-In and Check-out timings were not strictly followed and charged to the customer. I had very odd flight timings and they accommodated all without extra charge.
Thanks to the excellent services provided by the Reception Desk especially Longshan. She was very friendly and kind answer to all your questions without hesitation and also resolving the issues.
Staff was very friendly and English speaking.
Rooms were OK but some of the towels were very old. It would be better if the hotel replaces these old towels to maintain its reputation.
Food was great and reasonable.
I recommend to use this hotel if you are on a holiday and transit.

This review is the subjective opinion of a Tripadvisor member and not of TripAdvisor LLC.
NKyAdventurer
Fort Mitchell, Kentucky
412269
Reviewed 22 February 2017
Missed Flights Airport Hotel

I'm sure one of the things coloring reviews of this hotel is that it is a transient hotel in the truest sense of the word. From reading reviews, this is a "go to" hotel for airlines to put up for a night their passengers who have missed connections. From personal experience, this is the 2nd time China Southern has put me here because the flight arriving from Guangzhou to Beijing was late causing me to miss my Delta flight to Detroit. The second time around one notices that virtually everyone is here for only a very brief period of time. That said, the hotel does a tolerable job in keeping things rolling with passengers who are frustrated, tired, and upset at the prospect of spending another night on the road.

The hotel rooms are nice enough---above average, in fact. Cleanliness, bedding, internet connection, and amenities were nice. The downside, as in any Chinese hotel, is that there are no "no smoking" rooms so the rooms and hallways are permeated by that stale cigarette smell.

There is a restaurant on-site and the airline/hotel will either give you dinner or a 30RMB credit to order from the menu. The food is average but the service is quick. Beer runs 15RMB and wine is available also. There is a breakfast buffet which the airlines/hotel also offer but it's advised to get there on the earlier side since food runs out.

There are frequent shuttles back to the airport, which is only 5 minutes away, but it's advisable to schedule one when you check in.

There's really not much in the immediate surrounding neighborhood but then you'll only be at this hotel a very short while.