me and my friend were the only 2 english in a hotel full of russians.cant fault any of the staff who went out of there way to help probably because we were the only 2,bar 1 belaruse couple that had any manners in the whole place.as for the food,ive had worse,you could always find something to eat.we even had the chef bring us over chips(because we are english)he said.i liked this hotel because you didnt get the hassle you get at others,was only asked once if we,d like to go on trips,which we did once,we had a fantastic guide called sammi who made it a great day for everyone.the only reason i would not come back to this hotel is because there is no other nationalities but arrogant ignorant russiansMore

Show less
See all 317 reviews
Payments made by partners impact the order of prices displayed. Room types may vary.
Nearby Hotels 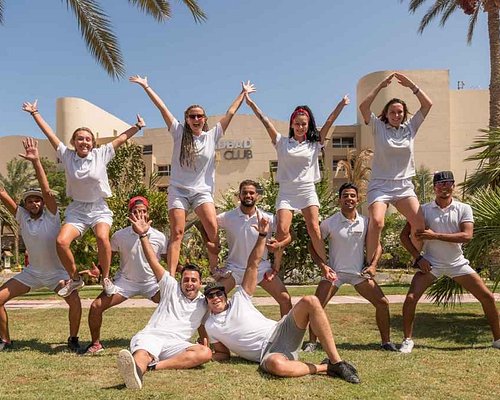 All Inclusive
Sponsored
Sindbad Club
US$187
Booking.com
View deal
Free cancellation
Priceline
US$166
Agoda.com
US$84
eDreams
US$187
View all 8 deals from US$84
3,961 reviews

Taking safety measures
We compared the lowest prices from 8 websites 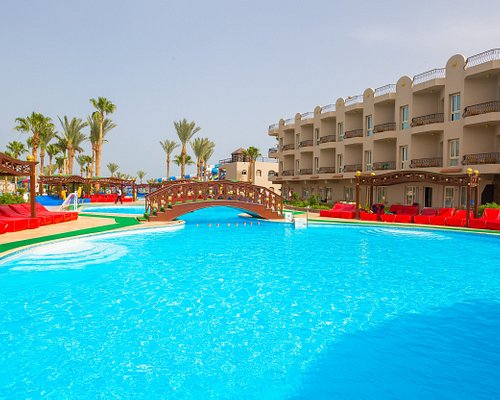 Expedia.com
View deal
Hotels.com
US$73
Trip.com
US$66
Booking.com
US$83
View all 13 deals from US$66
669 reviews
5.0 miles from Jewels Sahara Boutique Resort
We compared the lowest prices from 13 websites
All Inclusive
Hotelux Marina Beach Resort
US$96

Expedia.com
View deal
Free cancellation
Pay up to 12X
Hotels.com
US$45
JAZ
US$41
Booking.com
US$45
View all 15 deals from US$41
267 reviews
4.9 miles from Jewels Sahara Boutique Resort

We booked this hotel with Sunmaster in England. I am sure thay never checked! Otherwise it wouldn't be on any english site.
First, we wanted something special so we payed for a Suite. Never got it! The reception said /dind't speak much english because only Russian guests stayed!!!!/ we got better but we knew they were lying. Probably they were overbooked for the suits. It was bad idea to pay for it even so we had to pay extra in the last minute when booking through phone.
The family room we got was awful dirty, and outdated. The toilet was leaking smelly. The balkony shared.
No internet as they say/ this was the reason we choose this hotel/.
Well, everywhere everyone speak only russian. Even on the Beach, at the bar, upcoming activities ect......
In the restaurant only one or two, but fortunately we had a very nice waiter who cared for us!! Even though he speak no english, he was helpful and did his best! The food was ok until we had fish one time! As the doctor said later we souldn't have! After a vaccine and medications for 3 days we were fine. NO FISH!!
One night we thought we try the other restaurant. Well it was a bad idea again. By the time they seated us, we knew there is no other kitchen!! They brought up the same food for eveyone at the same time. No question who wants what. If italian than pasta if oriental than egyptan. No variety in drinks, even if you would pay for it you can't!! You can drink the horrible wine or the warm beer. We had water for 2 weeks.
On the beach if you like to sleep later there was no towel. The photoes on the site are from the other hotel Hilton, so dont expect it! It is much smaller! Lots of snaks, tea coffee ect....
The noise was awful, it came from next door maybe aircond, or something else. It was bad at night. Specially if next room was having a party every night till 3 am, /2 girls/ listening russian music like it wasn't enough all day everywhere on the resort!
The laundry servise was good.
The only time we did enjoy the holiday was the 2 day on trip. One to the Jungle Aqapark which was marvellous. Clean tidy well organised! Great day out!!
The other one was a boat trip to the Paradise island. This was really the Paradise!! 1 hour snorkeling from the boat, many fish amezing coralls. Beautifull beach, good food, english speaking boat! Wonderfull!!!!
All in all I have to say this was the worst and most expensive holiday we ever had! I dont think we will go to Egypt any more. Even though on Sharm-El Sheik was much better!!! /but it was 5 years ago/
2012 Oktober 12-26 all inclusive London-Hurghada
Hope I could help! I dont recomend this hotel for anyone who wants something for they money!

This review is the subjective opinion of a Tripadvisor member and not of TripAdvisor LLC.
Alina_Li
Moscow, Russia
25
Reviewed 31 January 2012
just good hotel

in general i liked hotel. nice and quiet place, small but nice beach. service was very good for 4 stars in egypt. the only thing i didnt like - was food - very poor and not so tasty indeed. but what i want from regular egyptian hotel? in fact it was good vacations. i enjoyed!

This review is the subjective opinion of a Tripadvisor member and not of TripAdvisor LLC.
nusi22222222
Bucharest, Romania
19
Reviewed 7 January 2012
BAD HOTEL I EVER BEEN

I was this year silvester on this therible hotel , check in 31 december 2011 check out 1 january 2012 why :
Everithing but everything on this hotel is oriblle , nothing for food , the pool was dirty and cold , and the room like 1 star hotel from bosnia hertegovina !
The hotel is near construction place , near the badest street from hurghada , many cats on the restaurant and the room smell like a WC
I don t recomand this therible hotel , after only 1 night we pay diference 150E on our tourism agency TEZ TOUR , and we moce in another hotel !
BURN THIS HOTEL AND MAKE A NEW CONSTRUCTION

This review is the subjective opinion of a Tripadvisor member and not of TripAdvisor LLC.
Denitza
Sofia, Bulgaria
2123
Reviewed 5 January 2012
Relatively good hotel, but with poor location

We stayed at the hotel in September 2011. It's small and quiet, with nice rooms and restaurant.
What I didn't like about it is that its beach is very small and the sea space is limited. There's an artificial bottom and the sea becomes very deep quickly after you enter the water.
The other major weak point is the location. The area is not nice to walk around. We had to use taxi in order to go to the center. It's not expensive, but we had to bargain each time.
The staff were friendly. The food - good, but nothing special.

Room tip: There were rooms with balconies facing the pool. They are most comfortable if you have to go in and out many times.
Ask Denitza about Jewels Sahara Boutique Resort
2  Thank Denitza

This review is the subjective opinion of a Tripadvisor member and not of TripAdvisor LLC.
fegda
Kaunas
810
Reviewed 27 November 2011
Tourism

Only 3 stars for this hotel. For not so expensive rest it can be acceptible. Poor food.

This review is the subjective opinion of a Tripadvisor member and not of TripAdvisor LLC.
View more reviews
PreviousNext
1…161718…