US$224
Free cancellation until 27/10/21
View deal
Hotels.comUS$224
CheapTicketsUS$224
TravelocityUS$224
Orbitz.comUS$224
TripadvisorUS$224
FindHotel
View all 14 deals
Prices are provided by our partners, and reflect nightly room rates, including all taxes and fees known to our partners. Please see our partners for more details.
Payments made by partners impact the order of prices displayed. Room types may vary.
Dan_ES1
Oxford, United Kingdom
3024

Hakone was recommended to me by a friend and I'm pleased I stopped off here for a couple of days when travelling between Kyoto and Tokyo. As I was coming to the area, I wanted to experience a traditional ryokan but without the massive costs associated with some of the boutique places. This place worked out well and I really enjoyed it.

The hotel is a couple of km from the nearest town but close to 5 mins walk from the train station and with bus stops right outside. You can easily get everywhere in the Hakone national park area without any hassle (Hakone Free Pass well worth it).

The hotel is an onsen hotel with separate men's and women's hot baths. It's an interesting experience but probably not for people who don't like public nakedness! Soaking in the hot bath after a day of exploring the national park is extremely relaxing though and definitely recommended.

I booked dinner here on one night and I'm really glad I did as it was an excellent traditional Japanese multi-dish feast. All really tasty and fresh although largely unidentifiable. The Japanese breakfast was really good too.

The room was a traditional tatami mat and futon affair, which overlooked the rapids of the river out back. A very relaxing experience.More

Show less
See all 430 reviews
Payments made by partners impact the order of prices displayed. Room types may vary.
Nearby Hotels 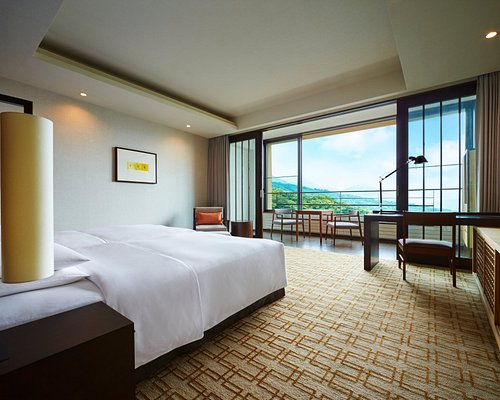 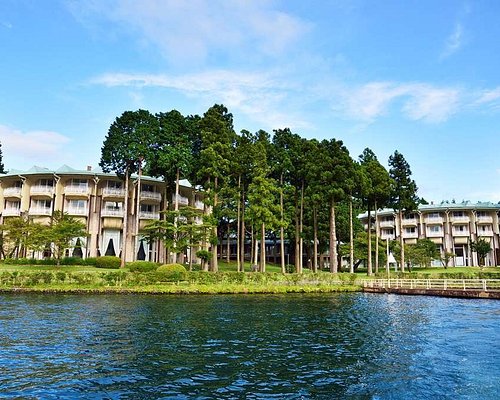 Expedia.com
View deal
Booking.com
US$297
Trip.com
US$190
Hotels.com
US$313
View all 15 deals from US$189
678 reviews
5.1 miles from Tonosawa Ichinoyu Honkan
We compared the lowest prices from 15 websites
Hakone Hotel

Expedia.com
View deal
Hotels.com
US$232
FindHotel
US$185
Booking.com
US$220
View all 15 deals from US$185
382 reviews
4.8 miles from Tonosawa Ichinoyu Honkan
We compared the lowest prices from 15 websites
Breakfast included
Laforet Club Hakone Gora Yu no Sumika

Taking safety measures
We compared the lowest prices from 14 websites
Hakone Kowakien Ten-Yu
US$416
Booking.com
View deal
Free cancellation
Expedia.com
US$375
FindHotel
US$332
Hotels.com
US$375
View all 13 deals from US$332
262 reviews
2.8 miles from Tonosawa Ichinoyu Honkan
We compared the lowest prices from 13 websites
Ryokan A Ryokan is a traditional Japanese accommodation which typically features ‘futon’ (folding mattresses) on ‘tatami’ (straw mat) floors. Many Ryokan are known for their public baths (typically "Onsen" hot springs) and their traditional cuisine. 24/7 front desk service is not guaranteed for this accommodation type.
Setsugetsuka

First off, if you are planning a trip to Japan and are wondering if it's worth it to go to Hakone, do yourself a favour and GO! It is breathtaking!
My wife and I decided to take the romance car one way on the way to Hakone from Tokyo, and it was the right choice. Very nice comfortable train ride.
Once we arrived in Hakone, we transfered to the cable car which drops you off only a few meters away from this ryokan.
As for the Ryokan itself, it was somewhat dissapointing.
However, we spent 270.00 dollars Canadian for a one night stay (booked directly off their websote) and it included dinner and breakfast. This was a pretty good deal, but in retrospect I wish I would have spent more and went some place else. This may have been our one and only chance to go to Japan, and I regret not spending another 100.00 to stay somewhere really memorable.
But, this place isn't terrible. Just a little shaby.
The guy who checed us in spoke PERFECT English. Better than some people speak it back home. So that was nice. He was also friendly and informative. He gave us some welcomed info on where to go around Hakone. After explaining the rules of the Ryokan to us, we zipped off to our room.
The room was very big, but again pretty warn out. No toilet in the room either, just a sink. The windows didn't open properly and the floor was a little tattered. It didn't really bother us, but I guess because we had built up the Ryokan experience so much in our minds, we couldn't help but feel let down.
The public spa area of the Ryokan was actually rather nice. It's indoors which was a bummer, but it was still enjoyable. No bathing suits, and the men are with the men and women with the women. There are strict rules to follow as well, so you would be wise to educate yourself before going in.
Don`t bother with the private experience. It was pretty scummy and gross.
The food here was authentic Japanese. It was tasty. No complaints, but not overly impressed either.
To summarize, if you want a cheap Ryokan experience book here. It`s decent but that`s about it.
But I would advise to spend more if it`s in your budget and stay somewhere as beautiful and memorable as Hakone herself.

This review is the subjective opinion of a Tripadvisor member and not of TripAdvisor LLC.
SydneyBarney
Sydney, Australia
38102
Reviewed 11 July 2012
Very relaxing stay

We used this hotel as a rest stop from Tokyo to Kyoto. We had spent the morning on the boat/cable car Hakone circuit for views of Mt Fuji and the lakes.
Travelling by local bus to the hotel in the evening was abit stressful as the hotel had an early check-in curfew (6pm) and we experienced very heavy traffic. So those coming via road should allow sufficient time.
Check-in was quick, your shoes are put in lockers and you are provided with slippers. Instantly felt relaxed. Experience was further enhanced by robes provided in the room – we wore ours (incorrectly) to dinner as we only discovered the instructions later. But it was fun.
Our room was a good size with a private tub in the garden. Having a private tub is great if you are not used to the traditional Japanese baths. The water was spring fed and was a constant warm temperature. It refilled itself constantly and was very clean. Such a great setting with the rushing stream in the background, which also ensured privacy.
The rest of the room was sparse and we slept on futons which we rolled out ourselves. It was so comfortable and was the best sleep that I had in my 1 week trip. Maybe that was due to a combination of the relaxing bath and the comfy futons. I believe that other ryokan prepare your beds for you and that you get dinner served in your room. However, for us, we thought that having our own tub was a good trade-off.
If I could suggest one area of improvement, that would be the food. They served a Kaiseki style menu and traditional breakfast. You can check this out on their website so you know what to expect. For a hotel of their size I thought maybe abit more choice could have been available. For example, breakfast was fish and rice with a few sides. Husband does not eat fish so settled on hungrily nibbling his satellite dishes (and mine!). Off course you could choose not to dine here and go out instead, but when we stay at a spa for some r&r, we don’t generally want to tramp around town.

This review is the subjective opinion of a Tripadvisor member and not of TripAdvisor LLC.
French-girl-in-TO
Toronto, Canada
7935
Reviewed 21 June 2012
sooo nice

real old ryokan
sleep on futon on the floor
by the river, in a small old village in the mountains

very nice dinner and breakfast, several course meal.
bath: very beautiful, in stones, by the river. For prude people you can book a 30-mn private bath, in marble.

This review is the subjective opinion of a Tripadvisor member and not of TripAdvisor LLC.
gksandiego
San Diego, California
5161
Reviewed 24 April 2012
Unique Experience, but relaxing

Being a US born Japanese-American, I've become accustomed to western hotels and travel, but also have heard my mother, aunts and grandmother talk about the "onsen" (public bath) and sleeping on tatami mats. . . . . Needless to say, it was a very unique experience, between the onsen, sleeping on the floor and traditional Japanese breakfast. . . it definitely added to the cultural understanding of my family heritage.

The hotel was older, but the views overlooking the water and the sound of the rushing stream was so relaxing at night. I still like the comforts of western travel, but definitely a neat experience for a night or two !!

This review is the subjective opinion of a Tripadvisor member and not of TripAdvisor LLC.
Rachel P
Orewa, New Zealand
4825
Reviewed 10 April 2012
Very picturesque

This is pretty much the cheapest traditional hotel you will find in the Hakone area. Its a very old building nestled in a picturesque valley.

Overall we really enjoyed our stay, it was an interesting experience!

The bathroom was not so clean, after visiting the public baths, I think the staff assume you will not be using your private bathroom.

The toilet was the smallest I've ever seen, about 1 yard square.

No WiFi, and the emobile pocket WiFi had no signal

This review is the subjective opinion of a Tripadvisor member and not of TripAdvisor LLC.
View more reviews
PreviousNext
1…373839…